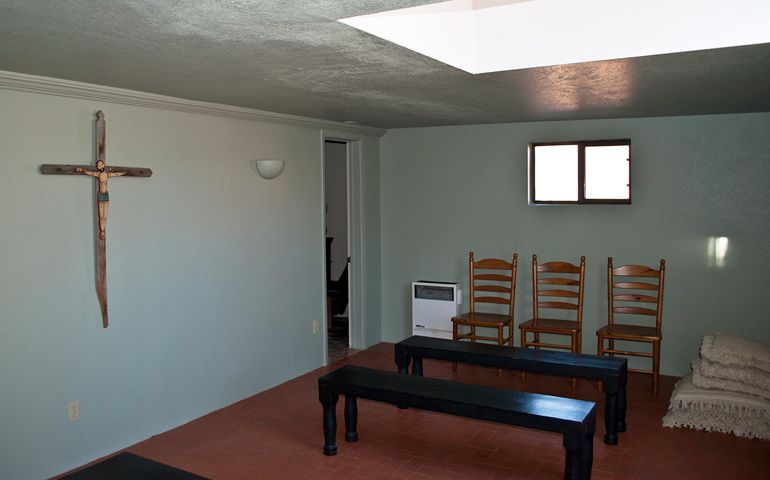 The chapel at Stillpoint, a second adobe home owned by the Center for Action and Contemplation that is one block away from the main building (David S Mckee)
This article appears in the The Living School feature series. View the full series.

This is part three of a three-part series. Find all of the segments here.

"The Rohr Institute" is not a title you're likely hear Franciscan Fr. Richard Rohr use himself.

But while he shies away from the name for fear that the Center for Action and Contemplation (CAC) will be misinterpreted as a "cult of personality," the center's staff is working diligently to transform its programming so the legacy of Rohr's work and tradition that has inspired him will endure.

"We are challenging people to go deep with Richard's work," says Matt Sholler, associate director of the Living School, the center's newest and largest endeavor. "Our hope is that they will find new applications for his ideas and create new acts of compassion in the world."

The Living School is the flagship program of The Rohr Institute, which was created "so that we could have a place where we can have greater conversations about the perennial tradition," says Alicia Johnson, executive director of the Center for Action and Contemplation.

Philosophers and theologians have spoken of a perennial philosophy for centuries. The idea, in a nutshell, is that all of the world's religious knowledge is based on shared universal truths.

For Rohr, the perennial tradition "encompasses the recurring themes in all of the world's religions and philosophies," all of which say:

Although the Living School will be a school of thought, practice and experience will be equally essential components of the course of study.

"We start with experiential, not the didactic," Sholler says. "There will be a healthy amount of academic-minded curriculum, but what will make the school distinctive is how we incorporate lived experience. How we build our experiential practices into the curriculum is the most challenging and creative opportunity for us in developing the school."

Building a spirit of community is also of crucial importance in all of the programs of The Rohr Institute. "We've encouraged our teachers to revisit how they relate to students," Sholler says. Instructors should be seen not as gurus, but as guides. "It's important that they are not seen as the center or focal point on the day."

"Striking the right communal tones is really important for us," Sholler says.

It isn't just the programming that is undergoing transformation. The center's grounds and its 125-year-old adobe buildings are being remodeled to enhance spiritual practice and foster community.

A student commons and a small library have been constructed in the main building, and the Sister Moon room, which is near the reception desk, will be available for prayer and contemplation.

The Brother Sun lecture room and studio boasts a recording booth, lights, cameras and software that will capture Rohr's lessons and reflections. A portable system can also record Rohr and other teachers outside the classroom. Other than this cutting-edge technology, the classroom will have two simple adornments: a handmade lectern and desk, created by Franciscan Br. Bart Wolf, with the Living School's three-leaf logo carved into the frontispieces.

The courtyard outside the adobe buildings is now home to the Placita de Magdalena. Named in honor of Mary Magdalene, it is a small plaza with contemplative walkways, places for gatherings and worship, and a portico offering cool shade from the powerful New Mexican sun.

Students and visitors to the center can also find spaces for their spiritual practice at a second adobe building, known as Stillpoint, one block up the road. Before the center acquired it, the adobe home belonged to the Damien brothers, who minister to those with HIV/AIDS.

At Stillpoint, visitors will find a remodeled chapel as well as a new labyrinth and garden that has been constructed in the backyard. Currently, Stillpoint is also the site of the CAC's fulfillment center for those who order Rohr's books and CDs. Later this year, it will also host a new visitor's center.

Even the CAC's publications will undergo transformation. After 25 years, the biannual Radical Grace has been retired. The final edition offered an extended reflection from Rohr on the eight core principles that guide the CAC's vision and mission.

Beginning this spring, the new literary journal Oneing: An Alternative Orthodoxy will replace Radical Grace. The new publication gets its unusual title from Lady Julian of Norwich, one of the most important English Christian mystics of the medieval period. When Julian was 30 years old and suffering from a serious illness, she experienced 16 revelations of divine love. One of them she described as "a great oneing betwixt Christ and us."

"Julian has become one of Richard's favorite mystics," says Vanessa Guerin, who has served as editor of Radical Grace since 2005 and will continue on as editor of Oneing.

The journal's subtitle, "an alternative orthodoxy," refers to the Franciscan tradition's notion of orthopraxy, which says that "lifestyle and practice are much more important than mere verbal orthodoxy."

The first issue of Oneing will feature 12 writers contemplating the meaning of the Perennial Tradition.

"I am excited about the opportunity for critical thinking that it will inspire in our readership," Guerin says.

Perhaps the biggest long-term plan for The Rohr Institute is the creation of a virtual library of the perennial philosophy, which will be an archive of written, spoken and video-recorded media that tells the story of the great wisdom traditions.

"It will be a place where we make knowledge rather than bury it," Johnson says. "People love Richard because he introduces them to new writers. Rohr Institute and this library will provide that kind of resource for them."

The first challenge in developing the library will be finding a candidate with a library science degree and an expertise with digital tools. "This library will have to cement the CAC's legacy in a way that is enduring," Sholler says. "It's possible this archive will even outlast the school."

Thinking about the future is always in forefront of all of The Rohr Institute's plans. "We get stuck on the idea that Richard is only a second-half-of-life teacher," Johnson says. "We have to challenge ourselves to remember that doesn't have to be true."

She believes a bridge can be built between young adults and Rohr by using the CAC's idea of discovering one's "soul task."

"So many young people are involved in social activism and have such a penchant for the common good," Johnson says. "If we guide them, understanding that they do have a sacred soul and that it has a task, we could help them put the world in a sacred context.

"If they can look at the world through those glasses, they are going to experience a vastly richer life," she explains. "Not easier, but much richer."

One of the ways the CAC staff is tapping into the next generation is through their inventive use of new technology in reaching out to a broad base of prospective students.

Those who may not have the time or funds to commit to The Living School will now have multiple opportunities to take online classes at the CAC. In the autumn, The Rohr Institute began the first of what they hope will be a series of online courses that will run on a semester-based system.

The inaugural course, based on Rohr's book Breathing Under Water, will run again this spring, as will a class on Franciscan spirituality called "Beyond the Birdbath: Richard Rohr Teaches the Courageous Heart of the Franciscan Way."

Although there is a fee for these classes, there is no application process. Students can simply register for them on the CAC website. Courses have been designed to be media-rich with plenty of audio and video clips and are self-paced so students can participate at whatever level their time and interest allows.

Using a virtual course management system called Moodle, online learners are able to connect with one another in a manner similar to Facebook or a blog.

"Many students in the Web classes have expressed surprise about the deep level of interaction that is made possible through this platform," Sholler says. "They weren't expecting that from an online course."

As is the case with all of the programs coming from The Rohr Institute, the online courses are meant to offer support to those on the spiritual path and to help build a community where those on the path can inspire and challenge one another as spiritual companions.

"One of our underlying desires is to end the loneliness of the spiritual journey," Johnson says. "It's so important to walk with real people who are doing it, too. But, unfortunately, most churches do not help with that."

But lamenting the limitations of religious institutions will not be the focus of any of the programming at the CAC.

"One of the core principles used here for 25 years is, 'The best criticism of the bad is the practice of the better.' When we find the better things, we try to make them normative," Johnson says. "That could be one of the great purposes of The Rohr Institute."

Richard Rohr on the Living School and getting off the road

What my father, who seldom called, taught me about my calling

The synod on the family and 'the grace of self-doubt'

Archbishop Sheehan: How to lose Catholics and alienate people