Caring for creation is central to Pope Francis' papacy 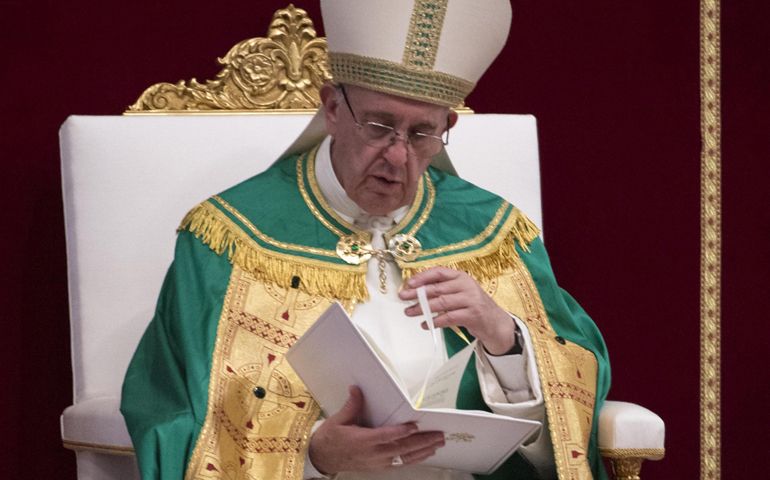 Pope Francis leads vespers for the Day of Prayer for the Care of Creation at the Vatican Sept. 1. (CNS/Maurizio Brambatti, EPA)

As the first pope in history to write an encyclical letter on the environment, Pope Francis demonstrated the urgent importance of caring for God's creation to the Catholic church and the world.

But Francis' challenging green encyclical "Laudato Si', on Care for Our Common Home," was but the first major initiative of a papacy significantly dedicated to teaching us to care for both humanity and the earth -- which he insists are intimately connected to each other -- "integral ecology."

The Holy Father's next major environmental step was establishing the World Day of Prayer for the Care of Creation, celebrated every first day of September.

In this year's Sept 1 message titled "Show Mercy to our Common Home," Pope Francis highlights, along with Orthodox Patriarch Bartholomew of Constantinople, "the moral and spiritual crisis at the root of environmental problems."

Global warming continues, due in part to human activity: 2015 was the warmest year on record, and 2016 will likely be warmer still. This is leading to ever more severe droughts, floods, fires, and extreme weather events. … The world's poor, though least responsible for climate change, are most vulnerable and already suffering its impact.

The Holy Father points us to another fact: "Human beings are deeply connected with all of creation. When we mistreat nature, we also mistreat human beings. … Let us hear 'both the cry of the earth and the cry of the poor,' " the pope wrote, quoting his encyclical Laudato Si'.

In highly prophetic language, Pope Francis challenges us to personal and ecological conversion. He writes:

As individuals, we have grown comfortable with certain lifestyles shaped by a distorted culture of prosperity and a "disordered desire to consume more than what is really necessary" (Laudato Si', 123), and we are participants in a system that "has imposed the mentality of profit at any price, with no concern for social exclusion or the destruction of nature" [Francis' July 9, 2015, address to the Second World Meeting of Popular Movements]. Let us repent of the harm we are doing to our common home.

In "Show Mercy to our Common Home," Pope Francis then takes another major environmental step forward by adding "care for our common home" to the traditional works of mercy.

As a spiritual work of mercy, "care for our common home" should inspire us to have " 'a grateful contemplation of God's world' which 'allows us to discover in each thing a teaching which God wishes to hand on to us,' " says Francis.

And as a corporal work of mercy, "care for our common home," should move us to exercise " 'simple daily gestures which break with the logic of violence, exploitation and selfishness,' " and thus should lead us to actively build a better world, writes Francis, quoting Laudato Si' throughout.

The Union of Concerned Scientists has some great ideas to help us "build a better world."

Called "America's Best Idea," the 1872 designation of Yellowstone National Park -- the world's first national park -- inspired a worldwide national park movement comprising over 100 nations. This outstanding example of wise and loving care for our common home proves that we are capable of cherishing God's creation.

In both "Show Mercy to our Common Home" and Laudato Si', Pope Francis urges us to ask ourselves, "What kind of world do we want to leave to those who come after us, to children who are now growing up?"

How we answer this piercing question, will significantly determine the fate of our common home.

[Tony Magliano, an internationally syndicated columnist on peace and justice issues, is available to speak at diocesan or parish gatherings about Catholic social teaching. He has delivered a keynote address, "Advancing the Kingdom of God in the 21st Century," at gatherings from Santa Clara, Calif., to Baltimore, Md., Magliano can be reached at tmag@zoominternet.net.]

Vatican | Caring for creation is central to Pope Francis' papacy

The Life: Sisters reflect on care for the Earth

Contemplate, give thanks, protect: Pope Francis prays for creation