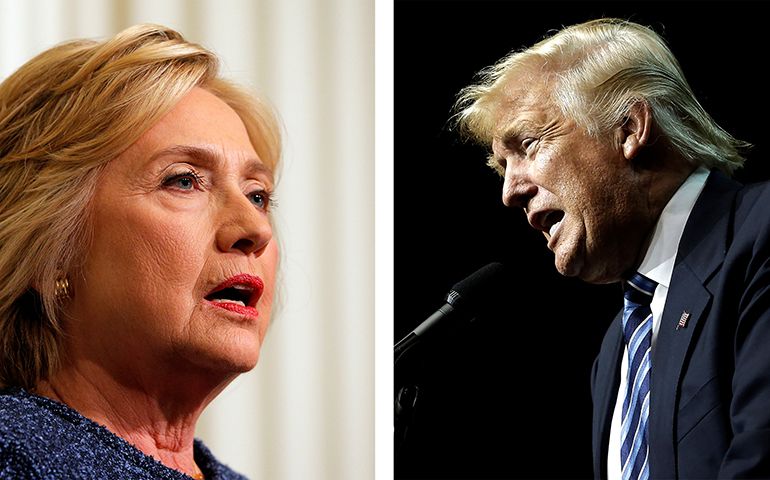 Throw your political affiliation out the window!

Your political affiliation is not that important.

What's crucially important is your affiliation with Jesus, and your commitment to his campaign -- to his divine plan.

Are you voting for Jesus Christ?

Oh, but Jesus is not running for election. Oh, but yes he is!

Jesus is running as an unborn baby threatened by abortion, a starving child, a poor mother whose resources have run out, a war-weary desperate father with five children, a hard-working undocumented immigrant, a Christian refugee fleeing ISIS, and a Central American teenager seeking asylum from gang violence.

He is running as a heroin-addicted young man, a little child drinking polluted water, a lonely old woman with meager resources, a young sweatshop worker, a homeless man, a trafficked girl trapped in prostitution, and a seriously ill elderly woman informed that a physician is available to assist her in committing suicide.

Oh yes, Jesus is surely campaigning -- for the vulnerable and poor, for the care of creation and for peace on earth.

However, sad to say, his party -- the human race -- is not leading in the polls. Most wealthy individuals, corporations and government office holders are far more interested in holding unto their riches and power than in voting for, and working for, the human race.

The 2016 U.S. elections are of crucial importance not only for America, but for the human race. Because the U.S. is the world's strongest military and economic power, the November elections are of great importance to the inhabitants of planet Earth. That is exactly why it is crucial for Christians to enter the voting booth with a well-formed conscience based on Gospel values.

The compassionate integrity -- or lack thereof -- of the next president and members of Congress, will significantly determine how well, or how poorly, the human race does in the next several years.

"Forming Consciences for Faithful Citizenship," produced by the United States Conference of Catholic Bishops, is a very good election guide to help Catholics, all other Christians, and people of good will to make the best moral choices. The bishops are urging us to read the entire document.

In this document the bishops teach that as each person strives to form her/his conscience, it is essential "to embrace goodness and truth. For Catholics, this begins with a willingness and openness to seek the truth and what is right by studying Sacred Scripture and the teaching of the Church as contained in the Catechism of the Catholic Church."

The bishops clarify that while we may choose different ways to respond to compelling social problems, "We cannot differ on our moral obligation to help build a more just and peaceful world through morally acceptable means, so that the weak and vulnerable are protected and human rights and dignity are defended."

May voters everywhere commit to voting for candidates who are most likely to work for the common good of the entire human race -- especially for the poor, vulnerable, war-torn, and planet Earth -- our common home.

As faithful disciples of Jesus, let us never forget that when it comes to political elections, as well as in all matters, the Gospel trumps everything!

Politics | This election, vote with a Christian conscience