Skip to main content
Spirituality
This story appears in the Synod on the Family feature series. View the full series. 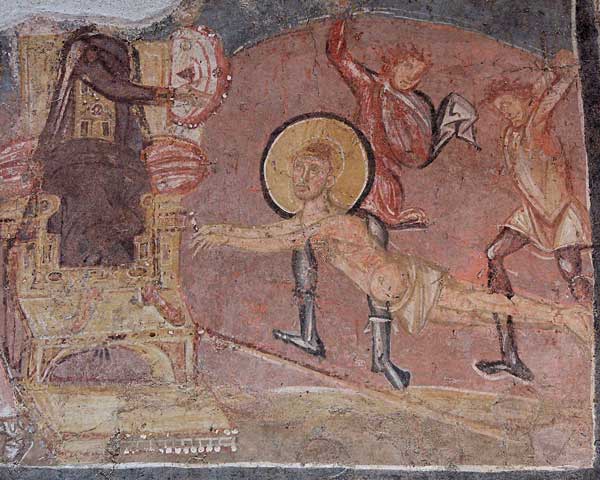 Eighth-century Byzantine artwork from the crypt of the church of Santa Maria in Via Lata in Rome depicts St. Erasmus flogged in the presence of Emperor Diocletian. (Wikimedia Commons/Jastrow)

I'm thinking about the Donatist controversy these days because I see a relevance to the Synod of Bishops on the family and the current question of reconciliation for divorced and remarried Catholics. The Donatists, like the faithful divorced and remarried (by which I mean people still coming to Mass, praying and living as Catholics, though barred from receiving the sacraments), were not separated from the church on the grounds of heresy, but of discipline. The Donatists wanted a church uncontaminated by serious sin, and there's nothing heretical about that; it's just impossible.

I like to imagine myself one of the faithful of the fourth-century Diocletian persecution, one of those who died rather than bow down before Roman gods or surrender sacred texts to be burned, but I know better.

Having survived, I would have faced the painful moment when we reassembled to worship. There, the woman widowed and the children orphaned. Me with my family safely by my side. There, the priest who stood beside me, surrendering whatever the authorities asked. Here, the place where his martyred brother priest stood, vacant, the empty space filled with accusations and questions.

In that time, the Donatists were the ones who had remained faithful and held that lapsed priests were not able, because of their apostasy, to preside at the sacraments. As the Donatist Bishop Primian said, "The sons of the martyrs and the brood of traditores can never meet."

In our time, it is the church that holds that divorced and remarried Catholics are not able to receive Communion because their irregular marriages place them outside the sacraments.

After the persecution ended, the breach remained. And the church had to ask: What to do with those who fell? How could a lapsed priest have authority over his flock? As Henry Chadwick writes, "Sanctity could easily merge into separation and censoriousness." He also points out, "In the debate about restoration, scripture could be quoted both for rigor and for mercy."

This was the dilemma that tore the North African church apart, giving rise to rival bishops (those Donatists who represented rigor against those Catholics who represented mercy) overseeing competing churches. St. Augustine writes of violence taking place between these groups, with a Catholic bishop beaten and stabbed on the altar by his Donatist rivals. (He explains that the bishop was stabbed in the groin -- murder being an apparently less serious sin than apostasy -- and would have bled to death, if not for the good fortune of being dragged along the dirty floor. The dust clogged his wounds, stopping the bleeding. It makes our Internet battles over current issues seem both happily safe and sadly tedious by comparison.)

When the church confronted the first issue, it took a look at the various kinds of betrayal. Some had handed over sacred texts or bowed down before Roman gods without a murmur. Others had done so only after prolonged torture or imprisonment. Were both sins of equal weight? The synods said no. Apostasy under order is not the same as apostasy under torture. And so the work of reconciliation went forward.

When the church confronted the second issue, it had less success. We don't know that the forgiving father in Luke's Gospel had any luck with the older son, either. We know the prodigal came home. The last we see of the older son, he is complaining that his faithfulness never occasioned any celebrations. The father, after telling him, "Everything I have is yours," pleads, "But now we must celebrate and rejoice, because your brother was dead and has come to life again; he was lost and has been found."

We never find out if the older brother came to the party or stayed outside. But we know that the church never stopped preaching or writing or meeting in synods, working to bring the Donatists home, even when its priests and bishops were attacked and killed, even when the Donatists were in the majority in North Africa.

Can the Donatist crisis provide insight for the ongoing work of the synod on the family? Can we revere sanctity while avoiding separation and censoriousness?

I think of a couple I know. They both married young, and divorced young, before meeting one another. The woman was not a Catholic; the man was. They married and had three sons. They begin attending Sunday Mass together. They are raising their sons, who have been baptized, in the church.

The man has taken all the steps necessary for an annulment. They have not been encouraged by the chancery to believe the annulment will be granted. They are trying to create a Catholic home for their children. They pray to be one with their sons at the altar.

Their situation brings to mind Augustine's anguished letter to a Donatist bishop, "What has Christ done to us, that we rend his members asunder? Consider how sad a division reigns in Christian households and families. Husband and wife, who -- in their married life -- know no division, separate themselves at the altar of Christ!"

Of course, the trouble with dueling anecdotes is that for every sober and thoughtful divorced and remarried couple, I can find a couple treating marriage as just another acquisition, to be returned or replaced if deemed defective. I saw the damage from such multiple couplings and dissolutions during the nine years I spent as a campus minister. These kids, who should be lyric poets, not bitter skeptics, had parents whose carelessness made them cynics, sure that every embrace was but a pickpocket's grab, every promise a carny's con. So they vowed to trust no one and nothing. Too early old.

The thing is, most of these folks don't keep coming to Mass Sunday after Sunday, praying one day to again be fed the bread of life. They don't go through the difficult steps to gain an annulment. Just as there were Donatists who accepted the split and dug in, so there are the divorced and remarried who have left the church and don't plan on returning, whatever the synod says.

So what if we begin, not with all the cases of irregular marriage, but with the faithful divorced and remarried seeking annulment? What if we begin with the often confusing and often too difficult annulment process? What if we followed the North African church's stubborn way? Third century, fourth century, fifth century -- the conflict continued while the church continued to seek and to welcome, both the weak prodigal and his strong older brother.

[Melissa Musick Nussbaum lives in Colorado Springs, Colo. More of her work can be found at the catholiccatalogue.com.]

A version of this story appeared in the Nov 7-20, 2014 print issue under the headline: Insight from a fourth-century crisis.