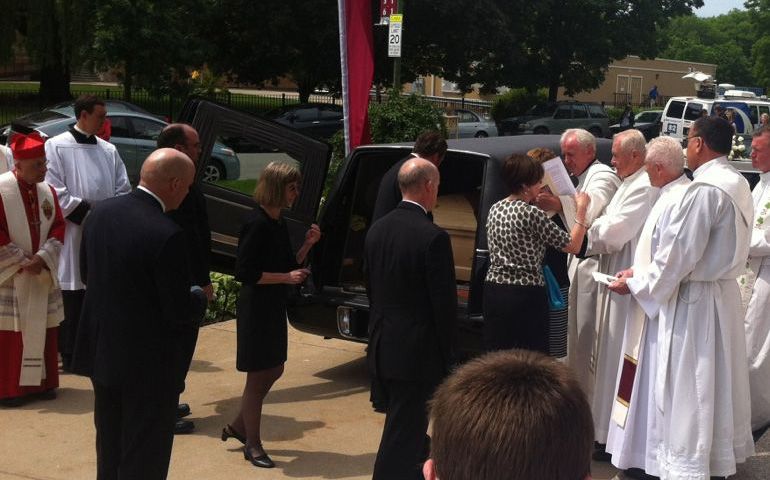 The casket of Fr. Andrew Greeley is placed in a hearse after his Mass of Christian burial Wednesday in the South Side of Chicago. (NCR photo/Thomas C. Fox)
This article appears in the Fr. Andrew Greeley feature series. View the full series.

Chicago — To the lyrics and cadence of "The Lord of the Dance," the body of Fr. Andrew Greeley was led Wednesday in procession following a funeral Mass from the South Side Christ the King church where he first served as a young priest. It was a parish for which he had a special fondness through his life.

That young priest is immortalized as part of a mosaic along the nave of the church, built in the 1950s.

Hundreds of friends, well-wishers, and longtime readers of the sociologist/novelist priest, known for his blunt assessments of the church and those who run it, gathered Wednesday to celebrate his funeral Mass, a liturgy punctuated with rich music and high praise for the man.

Greeley, 85, died May 30. On Nov. 7, 2008, wearing a Barack Obama baseball cap, he stepped out of a cab. His raincoat caught in the door. The cab pulled away, and Greeley fell to the ground, hitting his head.

Chicago priest, close friend and homilist Fr. John Cusick recalled that day. Cusick said he rushed to Greeley's bedside in the hospital where Cusick touched Greeley's arms as doctors worked to stop the brain from swelling.

"They cut a hole in his head," Cusick said, adding that the medical move would give support to Greeley critics who believed that had been the case for some time. Amid laughter, Cusick went on, admitting to the temptation to peek inside to see just how this one-of-a-kind man was wired.

Cusick said like others, he had read many of Greeley's works, both fiction and nonfiction, but the one that most influenced him was The Great Mysteries. In that book, Cusick said, Greeley portrayed a God "not from the top down, but from the ground up," describing a God who is present in all aspects, big and small, of the human endeavor.

This is what Greeley wrote in the introduction to the book in 1976:

Religion is grounded in human experience. In the midst of the frustrations, the ambiguities, the sorrows, the pleasures, the joys, the uncertainties of our lives, we occasionally sense that there may be something else going on. For some people, this "something else" is encountered in a dramatic, overpowering, ecstatic way. But for most of us it is perceived briefly and dimly: in the smile on a child's face, the glory of a sunset, or a day of pleasure and joy with good friends. At such times we feel at one with ourselves, nature, humanity. We know, of course, that the smile will vanish from the child's face, the sun will set and darkness will cover the earth, and our friends will go home, leaving us alone. We know that our perceptions of good things will end with our own death; but in that fleeting glimpse of the possibility of "something else" being at work in the world, we get a hint -- sometimes faint and sometimes very strong -- that there is something else in the universe besides our own brief and fragile life. It is out of these hints that humankind fashions religion.

Cusick portrayed his friend as a holy and dedicated priest, a man who gave himself entirely to the church. He praised Greeley's remarkable imagination and his willingness to speak up for the voiceless of the world. He said Greeley fearlessly spoke out against clergy sex abuse, calling upon church leaders to deal with it forthrightly.

With chief liturgical presider Chicago Cardinal Francis George sitting only a few feet away, Cusick ended his reflections by calling upon George to begin sainthood proceedings on Greeley's behalf.

Written on the back of a pamphlet outlining the day's liturgy were words Greeley once offered to the Chicago Tribune to describe himself:

I'm a priest, pure and simple ... The other things I do are just a way of being a priest."

Heaven a homecoming for Andrew Greeley

Greeley: 'I want to tell stories of God’s love'