Assessing the future with President-elect Trump 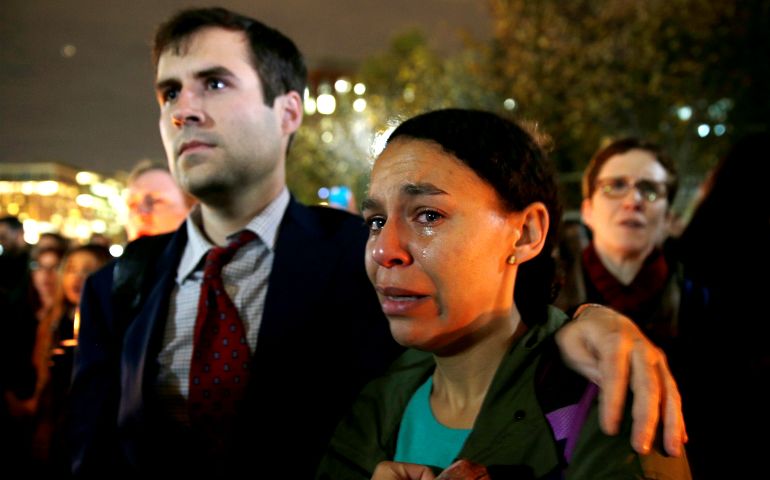 A woman cries while taking part in an anti-Trump vigil in front of the White House in Washington Nov. 9. (CNS/Kevin Lamarque, Reuters)
This article appears in the Transition to Trump feature series. View the full series.

I have to start out by saying I was wrong about the outcome of this election in every way. The fact that I was not alone does not make it any better.

Anytime the consensus of the polls and the media was as wrong as it was, and the election was as close as it was, there are any number of explanations that could be enunciated. For example, one could blame the low turnout of African-American voters, though it wasn't that low. A failure to see the problems in the Midwest swing states earlier and to campaign there may be another.

It is fair to say that the letter of James Comey to Congress had a dramatic impact on this race and may even have been the deciding factor. Yet it is not the only issue involved, and blaming Comey for the loss does little to change the result. The recent increased premiums in the Affordable Care Act played a role. The drip, drip of the WikiLeaks stolen emails was also a factor. Finally, though it has not been talked about much, the sexism or resistance to having a woman president was also in play.

Anytime an election is this close, each one of these factors could be the deciding one, and pundits can argue about the relative merits of each for years.

More to the point is the fact that Donald Trump had the support he needed to pull this race over the finish line. He has stunned the country and the world, but the result is significant. He came out of nowhere to crushingly defeat 16 other Republican heavyweights easily.

He has now defeated Secretary Hillary Clinton, taking almost all the must-win states and defying the conventional wisdom.

It might be worthwhile to take one more look at those omnipresent polls. How could they be so wrong? Well, they actually weren't all that wrong. The relevant state polls were almost all within the margin of error, and the national average of polls came to no more than 3 percent, which was also within the margin of error. The truth is, we didn't want Trump to win, and we didn't believe it was possible for him to win. We supplied our own interpretation and simply missed what was going on. With the media assuring us that Trump had almost no path to victory, it was easy to continue believing what we wanted to.

I know there is an inexhaustible list of things Trump said and did during this campaign that were offensive and even dangerous. Yet he is the duly elected representative of the people and we need to move on. Hopefully, he will put together a cabinet with persons other than Rudy Giuliani for attorney general and Newt Gingrich for secretary of state. As both Clinton and President Barack Obama said, we are required to put aside partisanship at this time and work with the soon-to-be president.

It would be so easy for those of us who opposed Trump to spend the next four years fighting against everything he says and does. Republicans did that for eight years against Obama. This approach would not be helpful. We must all work for what is best for our country, and right now that is to help this new president-elect be successful.

We, of course, need to challenge and work against Trump or any other president whenever we disagree with him. Our fight against injustice needs to continue. Yet, to work against the success of this president would be wrong and un-American. Republicans used that approach and it hurt our country, and made our government dysfunctional. We need to be better than that.

Finally, I would just make the point that I once argued, that it might be time for the United States to consider a parliamentary form of government to end the gridlock we have seen. We now have what is essentially a parliamentary government. Republicans are in charge of the entire country. They are free to do pretty much whatever they want. Gridlock is effectively ended.

Two years from now, however, we will have the opportunity to change that. That remains the strength of our democracy. We can elect a Democratic Congress if we choose to. If more people had voted in this election, the result would have been different. Thousands marched in the street to protest Trump's election.

Will they, and we, still be concerned enough in 2018 to change that?

May I just conclude with the hope that President Donald Trump will be a different person than candidate Donald Trump.