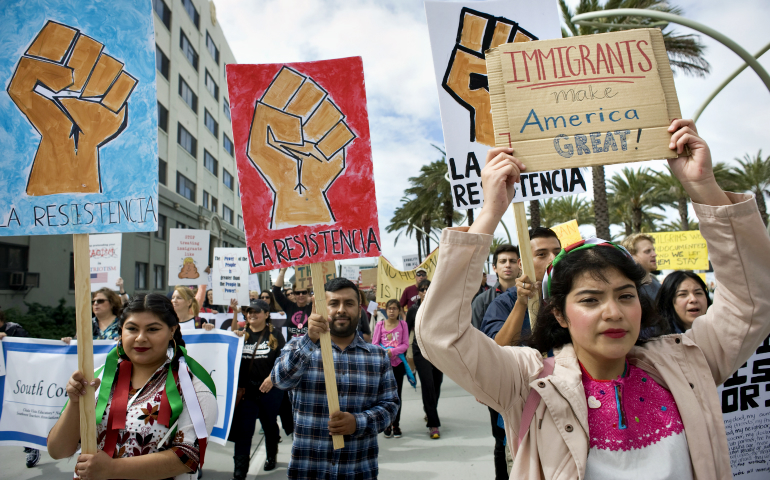 California is considering becoming a sanctuary state. I support this. Basically, it means that based on legislation introduced in the State Senate by State Senate leader Kevin de León, state law enforcement officials would not comply with federal immigration officials concerning the immigration status of people arrested and those who are to be released from detention. The exception is for those either accused or convicted of major felonies.

In short, the state would be saying that it does not support the Trump administration's threat to deport some 11 million undocumented immigrants, of which 1 million are estimated to live in California.

California would be saying that it does not agree with Trump that most undocumented immigrants are criminals and rapists. As did supporters of the historic sanctuary movement of the 1980s with respect to Central American refugees, California would be agreeing that undocumented immigrants are human beings who have entered this country essentially to find jobs to take care of their families and that they deserve respect, dignity and protection.

In the 1980s, many cities, along with churches, declared themselves to be sanctuaries in opposition to the Reagan administration's callous refusal to recognize Central American refugees from war-torn countries such as El Salvador as legitimate political refugees. President Ronald Reagan instead considered them "illegal aliens" coming to take jobs from "real Americans."

The fact is that Reagan was doing this to protect his dictatorial allies in Central America who oppressed and tyrannized their people through their U.S.-trained military and death squads, all in the name of anti-communism. It was a shameful period, when the U.S. government broke its own laws on refugees as well as international law.

To compensate, churches, Protestant and Catholic, along with synagogues, declared themselves sanctuaries to protect the refugees. Various cities followed. In Los Angeles, the city council proclaimed the City of Angels, hosting more than a million Central American refugees, a sanctuary city. In so doing, the city, similar to the current state legislation being considered, publicly stated that it would not play the role of immigration officials and would only have limited co-operation with the federal government's effort to apprehend and deport refugees and undocumented immigrants.

This was a courageous and principled stand on the part of Los Angeles and other cities. Only one state, New Mexico, to its credit proclaimed itself a sanctuary state. California would be built on this legacy.

The 1980s sanctuary movement recognized that those fleeing persecution and poverty are not criminals and rapists, but are people in need and who on this side of the border work hard to provide for their families. I teach many of their children in my classes at University of California, Santa Barbara, and they are as American as anyone else in my classes.

It is important that California, the most populous state in the union, defy the insensitive and cruel Trump administration and take the lead in resisting his nativist, anti-immigrant, and racist campaign to deport for the most part innocent people who through their hard work are the ones who are truly making America great.