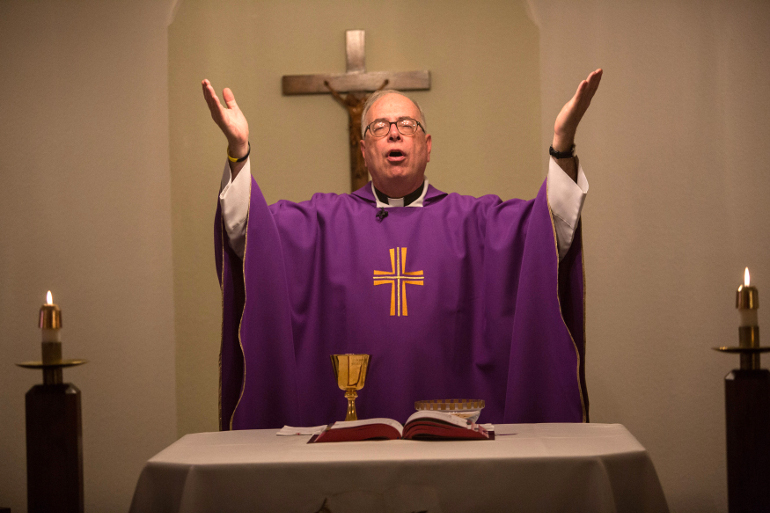 Since a March 22 landslide devastated a rural community tucked alongside a river and scenic mountain range 55 miles northeast of Seattle, Fr. Tim Sauer, pastor of Immaculate Conception Church in Arlington, Wash., and St. John Vianney Church in Darrington, Wash., has been working on behalf of both the living and the dead.

"When families come to us, we don't ask the question of what church they belong to or if they even belong to a church," Sauer said. "In meeting their needs, we are fulfilling one of the corporal works of mercy of the Catholic church, which is to bury the dead."

Even as the number of those who have died or are still missing has fluctuated over the past week, Sauer and his staff, in partnership with the Seattle archdiocese and Catholic Community Services (CCS), have been a close and constant presence in the area through coordinated relief efforts and the promise of financial assistance for the funerals and burials of victims. Numbers reported by NBC News on Wednesday accounted for 29 people dead (of which 22 have been identified and their families notified) and 20 people still missing. The parishes have become "point places" to assist with pastoral care and provide financial support if needed to bereaved families making arrangements with funeral homes, cemeteries, and cremation services.

Citing CCS as "the structure that stands behind us after the tragedy," Sauer recounted that the first phone call he made post-disaster was to CCS "as we became more and more aware of our needs." In return, staff at CCS have "been listening to what Fr. Tim is telling us and can and will mobilize resources based on his assessment of needs," said Will Rice, Regional Chief of Operations at CCS Western Washington. "He's been taking the lead and it's been wonderful."

CCS is also guided by a disaster-response expert on staff, and, in its role as a subcontractor for the Immediate Disaster Case Management Program with Catholic Charities USA, can apply strategies and lessons learned through responses to past disasters including Superstorm Sandy in 2012 and Hurricane Katrina in 2005 to the current tragedy. Rice estimates that approximately 40 staff in the area have been trained by CCS to provide case management services as secondary providers if needed.

At the request of the principal of the grade school in Darrington, CCS will also provide two full-time counselors to students once they return from spring break April 7. Since the mudslide has blocked a major arterial road and increased the length of commutes to workplaces in Everett and elsewhere, there are also plans underway to provide gas cards to Darrington residents in order to help defray increased transportation costs.

To support emergency response efforts, Sauer has also opened the Arlington church facility to Red Cross mental health counselors and responded to a request for the Snohomish County Human Services Department to place community navigators there to represent various community-based agencies able to assist those impacted in receiving needed services and to assist in securing housing, according to Michael Reichert, president of CCS of Western Washington.

Additionally, CCS donations and emergency parish funds drawn from a "Mustard Seed Account" have enabled Sauer to deliver fresh fruits and vegetables and other supplies to rescue teams and other volunteers and impacted community members in Darrington. A Saturday evening meal following Mass at lmmaculate Conception Church for National Guard rescue personnel and other emergency responders of various denominations, which took place last weekend with two dozen people attending, will also be continued for the foreseeable future. St. John Vianney's parish hall remains "at the disposal of counselors and disaster caseworkers, should they need it," Sauer said.

In the meantime, Sauer's focus and outreach in this time of "disbelief and shock and incredible hurt" remains open and attuned to the immediate needs of grieving families, emergency workers, and countless others in his midst who "are reeling ... because it all happened so suddenly and unexpectedly, and then it was over," he said. "And yet, there is resolve and determination to set emotions aside and pull up sleeves and get to work because there are a million things to do. This is what we're doing. This is what we must do."

[Julie Gunter is a freelancer writer based in Seattle.]