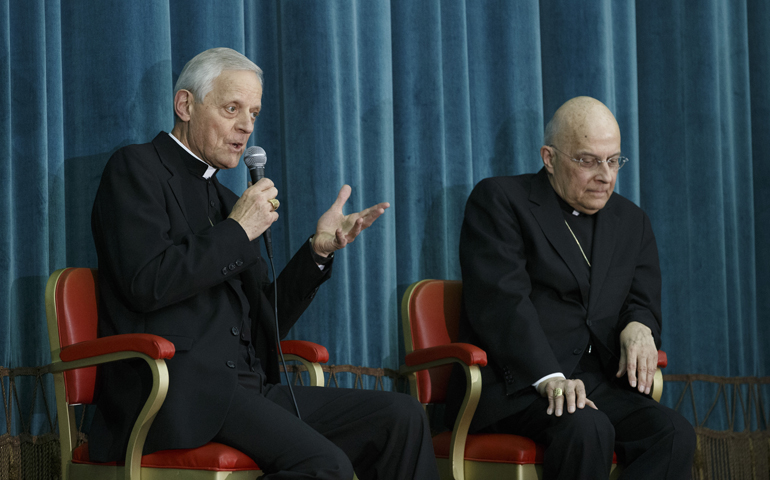 In the wake of Wednesday's news that the Americans will no longer be doing daily press briefings in the run-up to the conclave, apparently after cardinals in the General Congregation meeting this morning expressed concern about leaks in the Italian papers, there are all sorts of good questions one might ask. Three, however, seem the most immediately intriguing.

The first two are easier to answer, at least without veering into the realm of the speculative.

In terms of the reason for the gag order, a statement from the U.S. bishops indicated that concerns had been expressed in the General Congregation meetings about details of their supposedly confidential discussions showing up in Italian newspapers, and as a precautionary measure, the Americans have decided not to give interviews.

That's no doubt part of the picture, but there's more.

One is concern among some cardinals that the agenda for the conclave should be set by themselves, not by the media. Over the centuries, the Vatican has fought titanic battles to protect this process from outside influence, and concern for the independence of a papal election is hardwired into the place's DNA.

There's also a more prosaic factor at work. Over the last two days, journalists from other parts of the world had been peppering their cardinals with an obvious question: If the Americans are doing this, why aren't you? Part of the push to get the Americans to dial it down may have been related to not pressuring other cardinals to follow suit.

Finally, the Americans themselves may feel a bit relieved, since their willingness to meet the press was already being styled in some quarters as an effort to hijack the conclave, or to promote American candidates for the papacy. This way they can avoid feeding conspiracy theories without shouldering the blame for pulling the plug.

Now for the PR fallout, which probably won't be pretty.

The first result of the cardinals subtracting themselves from the conversation is that airtime and column inches will be filled by other voices, and the story will be driven by other narratives. Let's take a practical example.

During a press briefing at the North American College on Monday, Cardinal Francis George of Chicago took a question about the child sex abuse scandals. In essence, he said that "zero tolerance" is now the law of the church and the next pope will be bound to follow it. That sound-bite became the day's story, and had it not been available, media outlets probably would have spent the day recycling reactions to Scottish Cardinal Keith O'Brien's admission of sexual misconduct.

From a strictly PR point of view, George turned a bad news day for the church into a fairly good one. Now, that sort of "save" is no longer an option.

Another consequence, and one rich with irony, is that the cardinals have expressed their irritation with the Italian papers by ensuring that they'll be the ones driving this story from here on out. In the absence of getting anything directly from the cardinals themselves, the world's media will rely even more on reports in the Italian press – some of which will be credible and accurate, but a lot of which will be bunk.

As far as the next 24 hours are concerned, the cardinals have ensured that tomorrow's coverage will focus on the clampdown, likely buoyed by theories about how the old guard has reasserted its authority. Given that the Americans had originally planned to make Cardinal Timothy Dolan available to the press today, consider the two options for tomorrow's conclave headline: "American charmer" versus "The Empire Strikes Back."

I'm not sure it requires a Ph.D. in communications theory to discern which one is likely to be the more positive story.

Finally, the decision to stop giving interviews is certain to irritate reporters who have deadlines to meet and, quite legitimately, are hungry for access to the newsmakers. An irritated press corps is probably not a prescription for "fair and balanced" coverage.

Now for the more hypothetical question: Given that this decision was directed primarily at the Americans, does it help or hurt the chances of an American pope?

The early impression seems to be that it might help, for two reasons.

First, there was already an anti-Italian and anti-old guard humor circulating among many cardinals, who have watched repeatedly as the system in the Vatican has broken down over the last eight years. Under the logic of "the enemy of my enemy is my friend", today's development may make some cardinal electors from other parts of the world more favorably inclined to the Americans. They may look less like part of a "First World" bloc, and more like fellow outsiders frustrated with business as usual.

The final statement from the U.S. bishops' press office all but said this out loud.

"The U.S. cardinals are committed to transparency, and have been pleased to share a process-related overview of their work with members of the media and with the public," it said. The implication is that there are some in the system who don't share that commitment to transparency.

Second, for those cardinals who believe that a capacity to evangelize and to engage the broader public is an important prerequisite in the next pope, they may look at the American model and think, "That's the way to go."

More generally, some cardinals may conclude that they've just had a brief 48-hour taste of what a more functional management style in the Vatican looks like. Perhaps they'll think that if they want that approach to become the new normal, they'll need an American to get it.

To be sure, it's not as if the two briefings held by the American cardinals on Monday and Tuesday broke much new ground, or delivered any stunning insights. They were, however, the only access many reporters had to the principals in this story. What started out as a crowd primarily of American media was being buoyed by reporters from all over the world.

Some transparency, in other words, was beating no transparency. Now that a lockdown has been imposed, nostalgia for the 48-hour "Prague Spring" at the North American College may become another factor in pre-conclave politics.