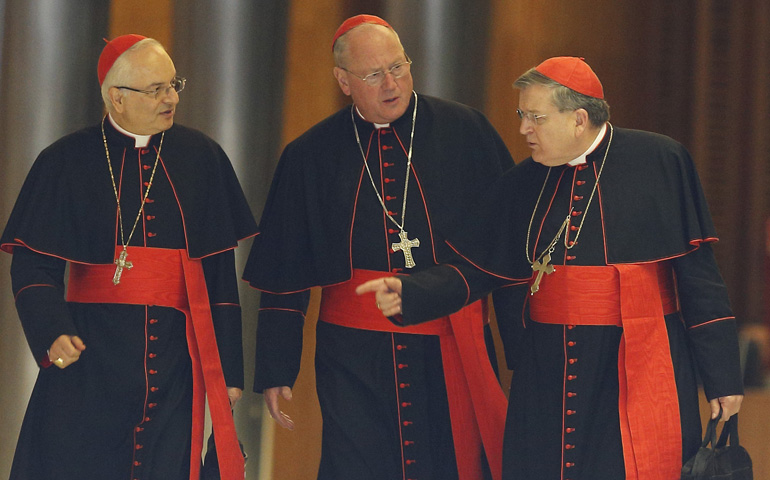 From left: Cardinal Mauro Piacenza, prefect of the Congregation for Clergy; Cardinal Timothy Dolan of New York; and Raymond Burke, prefect of the Supreme Court of the Apostolic Signatura, talk as they walk through Paul VI hall before the morning session of the extraordinary Synod of Bishops on the family Thursday at the Vatican. (CNS/Paul Haring)

The English-speaking bishops at the Synod of Bishops on the family want major changes in the mid-synod relatio, or working paper, that received positive reviews in the media for its compassion and understanding. They want a fuller presentation of the church's theology of marriage, more encouragement for those who are faithful to church teaching, and the elimination of what they consider confusing passages in the report.

It is not unusual for synod working papers to be criticized by the membership, but in the past they were usually criticized for being too abstract and academic and for not being pastoral. This time, the call is for more clarity in church teaching.

Three English-language groups, labeled A, B, and C, discussed the relatio and recommended changes. Bishops from Asia, Africa, Europe, and North America who wanted to be in an English group were assigned randomly to the groups.

Group A proposes a new introduction to address the issues of the synod "within the context of Scripture and the remarkably rich magesterium of the church." The final document "must proclaim the truth of the Gospel, the truth of human life and sexuality as revealed by Christ."

The critical issues that confront families today "cannot be separated from church teaching found in the treasury of her documentation," and therefore, they proposed amendments indicating "appropriate references to the Sacred Scriptures and Magisterial documents."

While it supports pastoral care and love for individuals, at the same time, Group A calls for "honestly recognizing and acknowledging sinful situations, and searching for ways to invite conversion of heart."

Group B also wants at the beginning of the report "some paragraphs clearly stressing how the Word of God, and the beauty of the Gospel of Marriage, must be central to the entire focus of the final report of the synod."

On the other hand, this group is not as convinced as Group A that the church's old way of doing things would work. It is not primarily a question, it says, "of simply repeating the church's teaching, but of reaching out and finding a language which can help the men and women and especially the young people of our time to open their hearts and minds to the Gospel of the Family."

Group B goes so far as to say that while the church must teach with clarity, it "must have the courage to knock on forbidden doors." They admit that this involves risk and courage, but "fear and anxiety of what we think are forbidden doors may mean excluding opening ourselves to the God who always surprises."

Group C not only calls for a new introduction, it for all practical purposes lays it out in the first paragraph of its report.

"Marriage is a gift of God to man, a blessing given by him for the well-being of his creatures, made in his image," the group says. "From the beginning God ordained that it is not good for man to live alone and so he created for him a helpmate, one equal to him, that they may live in relational complementarity."

It goes on to cite how the love between a man and a woman mirrors the relationship between Christ and his body, the church. "It is important that the Scriptural foundation for marriage, as well as the teaching found in Tradition, be made clear in the document from its beginning in order to build the framework for the issues to be discussed."

The groups also complain that not enough was said to support and give hope to Catholic families struggling to be faithful.

"We need to express words of encouragement and support to those who are faithfully living out their marriage vows and bringing up their families according to the teaching of the church," Group A says.

Many in Group B feel that "a young person reading the relatio would if anything become even less enthusiastic about undertaking the challenging vocation of Christian matrimony." Rather, the report should "help them understand and be attracted by the Christian vision of marriage and the family."

The group goes so far as to say, "The main thrust should be to encourage those who are committed and witness to the Christian ideal and who struggle day by day, with the help of God's grace to realize that ideal." The problems of nonsacramental unions "should not be allowed to steal the principal narrative."

Likewise, Group C "strongly felt that the tone of the entire document should express our confidence in marriage," something Kurtz has been saying repeatedly at the synod. "The document should also give encouragement to those committed to their marriages and families. They must not lose hope."

The groups reserve their most critical comments for what they consider ambiguous and confusing passages, which they feel would be misunderstood.

For example, Group A says "the relatio appeared to be suggesting that sex outside of marriage may be permissible, or that cohabitation may be permissible." They support concern and compassion but "suggest that we express these carefully so as not to create confusion in the minds and hearts of our people."

Again, Group B expresses "concern about an over emphasis on the term 'positive elements' when speaking of civil marriage and cohabitation." Group C also fears "we may inadvertently convey the impression that marriage is not important, or that it is an ideal that only a select few people can achieve." Some may even get the impression "that all unions are equal."

Only Group B responded to the section of the report on homosexuals. It notes that the church "must continue to promote the revealed nature of marriage as always between one man and one woman united in lifelong, life-giving, and faithful communion." Gay people should find within the church "a home where, with everyone else, they hear the call of Jesus to follow him in fidelity to the truth, to receive his grace to do so, and his mercy when they fail."

Reporters at the synod were thrown into confusion when the English translation of the relatio was changed from "welcoming" homosexuals to "providing for" them. No explanation was given for this change that clearly was not an accurate translation of "accogliere" in the official Italian. It appears that some of the English-speaking bishops got the secretariat of the synod to change the translation.

Meanwhile, during the press conference the Italian-to-English translator translated "intrinsically disordered" as "intrinsically messy," which will undoubtedly lead to a new line of T-shirts. For more on this controversy, see the report from Joshua J. McElwee.

Group A has "serious questions about the presentation of the principle of graduality." They want to make clear that it is not "the graduality of doctrine of faith and morals, but rather the gradual moral growth of the individual in his or her actions."

On Communion for divorced and remarried Catholics, Group A bluntly says, "We did not recommend the admission to the sacraments of divorced and re-married people."

On the other hand, Group B calls for "the clear affirmation of the indissolubility of a valid sacramental union" but also stresses "the strong desire to invite and embrace sincere Catholics who feel alienated from the family of the church because of irregular situations." They recommend the "examination of possible paths of repentance and discernment by which, in particular circumstance, a divorced and remarried person might participate in the sacraments."

The 12-member drafting committee is now poring over the input from these and other language groups as it attempts to put together a revised report that will be voted on by the entire synod on Saturday. This final document will provide the starting point for further discussions in the church prior to the next synod in October 2015. So stay tuned -- nothing is settled yet.

Update. An earlier version of this story did not have the names of those in each group.