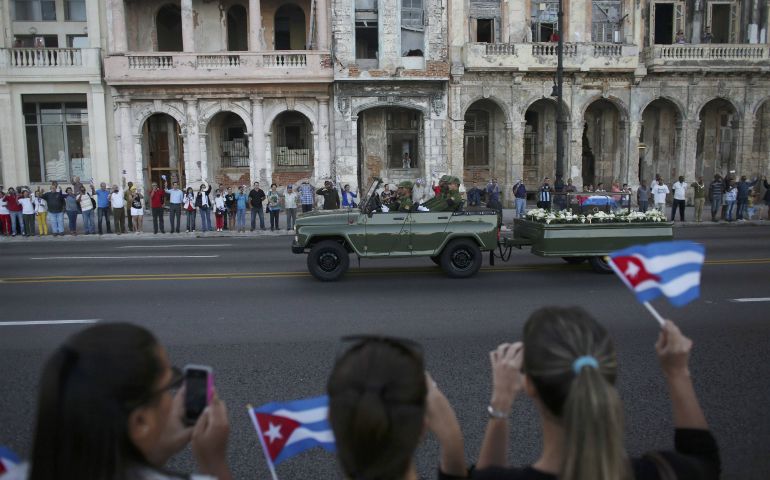 The reaction to the recent death of Fidel Castro in Cuba was, at one level, dismaying and, at another level, predictable. I'm referring to the news media response, which mostly focused on Castro as a brutal dictator who abused and tortured his people in addition to denying them political freedoms and lack of economic opportunities. Everything about Fidel was negative. Negative sells. There was no effort to contextualize Fidel's role in history or to present a more balanced and nuanced portrayal of a major revolutionary figure of the 20th century. I don't deny that Fidel was a strongman and possessed authoritarian tendencies, but this had more to do with a legacy of caudillo figures in Latin American history. Fidel was not a departure from this tradition; he was a product of it.

In 300 years of Spanish colonial rule in Latin America (including Cuba), Spain, a feudal colonial power, did not establish any tradition of self-governance, much less republican or democratic practices. All power came from the top, either from the Spanish crown or from its representatives in the colonies. This was Cuba's tradition, and Fidel and his followers of the Cuban Revolution of 1959 inherited it. Following the revolution and the toppling of the U.S.-controlled dictator Batista, Fidel Castro and leaders such as Che Guevara moved to consolidate the revolution, which meant having to deal with the followers of Batista and counter revolutionaries supported by the CIA — including the CIA-organized Bay of Pigs failed invasion in 1961. Revolutionary conditions, plus efforts by the United States to overthrow Castro and the revolution, help to explain some of the issues of political prisoners and unfortunate political executions.

The U.S. wanted to frame post-1959 Cuba as a Communist foothold in Latin America controlled by the Soviet Union. While it is true that the revolution turned to implement socialist economic relations to deal with economic inequality and poverty left by Batista, the revolution was first and foremost a nationalist revolution. It was not a Communist or Soviet conspiracy. It was a revolution to overturn the legacy of American neo-colonialism going back to the Spanish-American War of 1898, when the U.S. invaded Cuba and removed Spanish control from one of its last colonies in the Americas.

The United States had coveted Cuba for many years and hoped to annex it when possible. In 1898, the McKinley administration forced a "war of choice" and invaded Cuba. It did not formally annex the island, but the U.S. now indirectly controlled Cuba politically, including establishing an American military base at Guantanamo Bay and allowing American corporate interests, especially sugar companies, to exploit the Cuban economy. It time, the American Mafia also became part of the neo-colonial rule of Cuban through its gambling and prostitution activities on the island. Fidel Castro and the revolutionaries revolted to rid Cuba of this outside colonial influence. The revolution sought to decolonize Cuba politically, economically and culturally. It was a nationalist revolution based on Cuba controlling its own resources and possessing self-determination to rule itself without outside intervention. Fidel Castro was a Cuban nationalist and remained one until his death.

Although the revolution had to struggle against a crippling U.S. economic embargo, it provided basic needs and ended much poverty in Cuba. It did not implement an economic miracle, but it raised living standards, literacy rates and created a world-class health system the envy of much of the world. Above all, it symbolized the struggle — that continues — for Third World countries to shred the vestiges of colonialism and neo-colonialism so that they can control their own destinies. Fidel Castro represented this struggle like David vs. Goliath; and, like David, he toppled the giant, the American giant, and allowed Cuba to determine its own future. This had its good and bad aspects, but it was Cubans making their own decisions, not the Americans or anyone else.

For the Chicano Movement which I was a part of in the 1960s and 1970s, the Cuban Revolution of 1959 stood as a Latino revolutionary influence that told Chicanos that they could also struggle against their own internal colonized status within the U.S. and to achieve their own self-determination. Many of Chicanos of this generation visited Cuba during this time and drew inspiration for their movement against racial discrimination and class exploitation as cheap labor under American capitalism. Images of Fidel Castro and especially those of Che Guevara became standard for the Chicano Movement.

Chicanos challenged the American effort to portray Cuba as a Communist prison and a Soviet puppet and instead saw it more correctly as the product of a nationalist-inspired revolution that called for the self-determination of all colonized people, including Chicanos. Fidel Castro, rather than the dictator portrayed by the American media, is instead looked upon as a revolutionary figure who had the courage to stand up to American imperialism and to finally achieve independence for Cuba. This is how most Third World people in Latin America, Africa and Asia, as well as minorities such as Chicanos, see Fidel Castro.

Three zombie movies with something to say about human existence