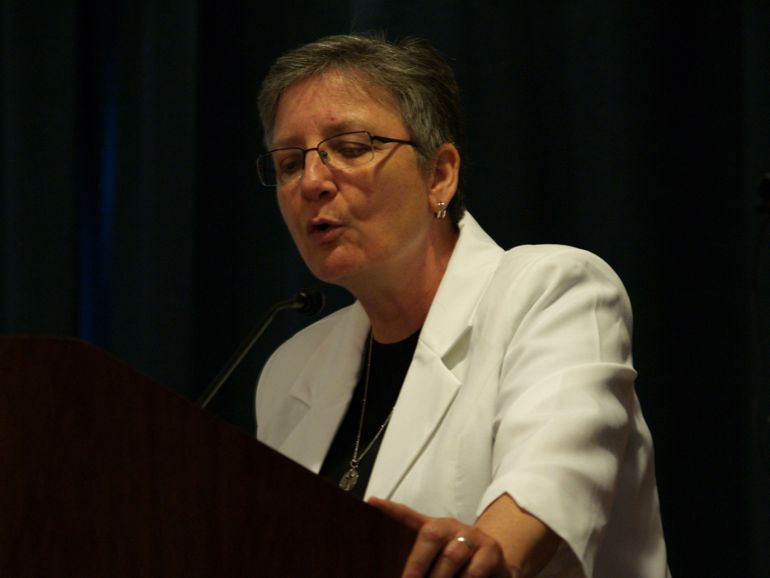 In a talk entitled “Graced Companionship: A Metaphor for Religious Leadership Today,” Garvin used Jesus at the primary model for leadership. She called him a graced companion “par excellance!”

“He was a transformational leader who offered vision, energy, challenge and courage to those attracted to his own way of being with and ministering to God’s people,” said Garvin, who teaches psychology and provides counselling at Creighton and Seton Hall Universities.

She spoke at a gathering of the International Union of Superiors General (UISG), which meets in plenary assembly here every three years here.

“To be a graced companion, to relate to our members as Jesus related to the disciples so as to promote God’s dream, God’s reign -- this has been the enduring commitment of our congregations,” said Garvin before some 800 religious leaders. “Likewise, the history of our own congregations is rich with legions of wise women, graced companions, transformational leaders who, following the example of Jesus accompanied the sisters of their times with vision, energy, challenge and courage as they ministered to God’s people.”

Garvin explored the key qualities in 21st century leadership, saying researchers have found the most profound characteristic of leadership is its “relational quality.”

“Applying this to leadership and leadership development, we see that it is precisely through relationships created and nourished between leaders and members that generativity is unleashed and the charism is quickened.”

To be a good leader requires maintaining one’s health and stamina, she said.

“These two practices are spiritually as well as psychologically valuable.  Each offers to us a relationship and safe-enough space where our joys and hopes, disillusionments and betrayals, which are part-and-parcel of the experience of leadership, may be prayed through and explored with another.”

Garvin added that effective leaders are “critical realists.” She said this means they are able to look reality in the face and communicate “joyful hope.”

“This capacity is strengthened by the courage to act in spite of obstacles whether they are political, ecclesial, or arise from within our own congregations.”

Another quality in effective leadership, she said, is the capacity to articulate one’s congregation’s charism “in fresh and compelling ways.”

She ended by saying that effective leadership also requires “the capacity to be attentive to the mystery of God wherever, whenever and however God chooses to make God’s self known.”

Garvin's talk was followed by table discussions and a question and answer period in which the women applied her ideas to the realities and needs of local congregations.