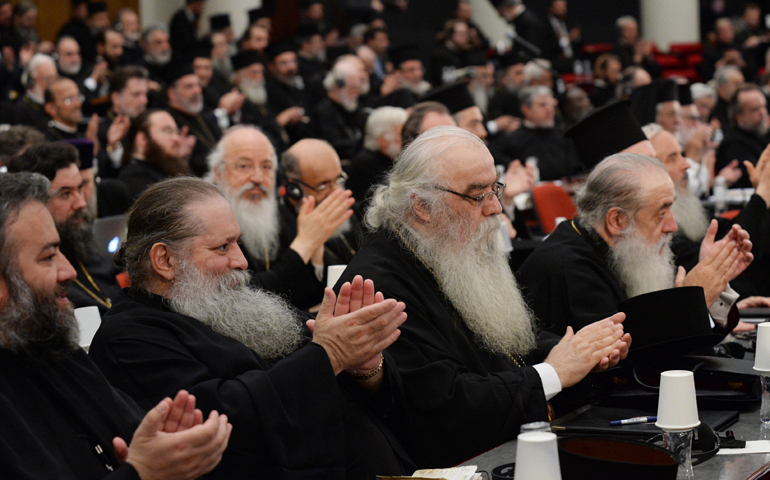 Orthodox leaders have concluded a historic council pledging dialogue with other churches, while also reaffirming "no compromise" when it comes to Orthodox teachings.

"The Orthodox church, faithful to the unanimous apostolic tradition and her sacramental experience, is the authentic continuation of the one Holy Catholic and Apostolic Church as confessed in the Creed and confirmed by the teaching of the Church Fathers," the Orthodox representatives said in a final message.

"Our church attaches great importance to dialogue, primarily with non- Orthodox Christians. In this way the remainder of the Christian world comes to know more precisely the authenticity of the Orthodox tradition, the value of patristic teaching and the liturgical life and faith of the Orthodox. Dialogues conducted by the Orthodox church never imply a compromise in matters of faith."

The message was issued at the end of the Holy and Great Council, attended in Crete by 220 Orthodox bishops and archbishops, as well as 70 official advisers.

It said the signatories were full of "thanksgiving and praise" that the gathering had taken place, despite boycotts by four of the 14 Orthodox churches, adding that the Council's key priority had been "to proclaim the unity of the Orthodox church" with "a prophetic voice that cannot be silenced."

"The Orthodox church expresses her unity and catholicity in council -- conciliarity pervades her organization, the way decisions are taken and determines her path," the message continued.

"The church does not involve herself in politics -- her voice remains distinct, but also prophetic, as a beneficial intervention for the sake of man. Human rights today are at the center of politics as a response to social and political crises and upheavals, and seek to protect the citizen from the arbitrary power of the state. Our church adds to this the obligations and responsibilities of citizens and the need for constant self-criticism."

The week-long Council, widely believed the first on such a scale for 1,200 years, ended with a June 26 liturgy at Chania's St Peter and Paul Basilica, presided over by its convener, Ecumenical Patriarch Bartholomew I of Constantinople.

It adopted joint declarations on Orthodox mission, diaspora affairs, church autonomy, fasting and ties with other Christian churches, as well as document on marriage, which said heterosexual unions were "an indispensable condition for marriage," and barred church members from "same-sex unions or any other form of cohabitation."

Speaking on June 24, the Council spokesman, Archbishop Job Getcha of Telmessos, said the Council's decisions would be binding for all churches, despite decisions by the Antioch Patriarchate and Orthodox churches in Georgia and Bulgaria and Russia to stay away.

As proof, he added that voting procedures were "valid in democratic countries" even if some citizens chose not to participate.

However, this was rejected on June 27 by an official from Russia's Orthodox church, which has cautioned it may not recognize moves by the Crete Council.

"There's been no democracy in the church since the first centuries, and there won't be now, since democracy means the rule of people, and power in the church belongs to God."

A total of 15 observers from non-Orthodox churches attended the Council, including Cardinal Kurt Koch, chairman of the Vatican's Pontifical Council for Promoting Christian Unity, and were greeted by Patriarch Bartholomew at the final liturgy.

In its document on ties with other Christian denominations, the Council said Orthodox churches had "participated in the ecumenical movement from its outset," seeing this as "a consistent expression of the apostolic faith and tradition in new historical circumstances."

It added that most were still involved at national, regional and international levels, despite the ecumenical movement's current "deep crisis," and said each church should keep others informed of its engagement "to express solidarity and unity."

All churches should be notified of theological dialogues, the document said, with attempts made to coordinate relevant committees, while any dialogue achievements should depend on "unanimity of all local Orthodox churches."

"The Orthodox church accepts the historical name of other non-Orthodox Christian churches and confessions that are not in communion with her, and believes her relations with them should be based on the most speedy and objective clarification possible of the whole ecclesiological question -- most especially of their more general teachings on sacraments, grace, priesthood and apostolic succession," added the document, which made no direct reference to the Catholic church.

"In the theological dialogues, the common goal of all is the ultimate restoration of unity in true faith and love. However, the existing theological and ecclesiological differences permit a certain hierarchical ordering of challenges in the way of this pan-Orthodox objective. The distinctive problems of each bilateral dialogue require a differentiation in the methodology followed in it."

Meanwhile, in its final message, the Council said current "explosions of fundamentalism" in religions were "an expression of morbid religiosity," and called on Middle East governments to do more to protect endangered Christian populations, and on all citizens, including Orthodox Christians, to help refugees "to the limit or even beyond the limit of their abilities."

The message said Orthodoxy recognized the benefits brought by science and did not "adopt a position on every scientific question," but also recognized that science could also lead to "the manipulation of freedom, gradual loss of precious traditions, destruction of the natural environment and the questioning of moral values."

The current ecological crisis had "spiritual and moral causes" and was "connected with greed, avarice and egoism," the message added, while the best Christian response included "repentance for the abuses and an ascetic frame of mind as an antidote to over-consumption."

"Orthodoxy proposes respect for the particular characteristics of individual peoples -- it also opposed making the economy into something autonomous from basic human needs and turning it into an end in itself," the Council said.

"She insists that a fundamental human right is the protection of religious freedom -- namely, freedom of conscience, belief and religion, including the right to freedom of worship and practice alone and in community, in private and in public, and the right of religious communities to religious education and to full function and exercise of their religious duties without direct or indirect interference by the state."

Each Orthodox church was permitted to bring up to 25 bishops and six advisers to the Council, procedures for which were finalized last January by the Orthodox Synaxis, or assembly of Orthodox primates, after a century of on-off planning.

Council sources said a total of nine women had been included among the 290 delegates for the first time at a major Orthodox meeting, and said it was hoped a proposal, noted in the final message, for the Council to become "a regular institution, convened every seven or ten years," would be acted on.

However, in his June 27 Interfax statement, Balashov said the Russian Orthodox church, the world's largest, would "make an attentive study" of the final documents at a July session of its governing Holy Synod, and "decide its attitude" to them.

Russian church officials have also warned the Ecumenical Patriarch, who is recognized as holding honorary first place among Orthodox primates, not to act on a July 16 resolution by Ukraine's parliament, the Verkhovna Rada, calling on him to declare the Ukrainian Orthodox Church independent from the Moscow Patriarchate.

In its document on inter-church ties, the Council said Orthodoxy believed in "eschewing every act of proselytism, uniatism or other provocative act of inter-confessional competition," but also condemned "all efforts to break the unity of the church, undertaken by individuals or groups under the pretext of maintaining or allegedly defending true Orthodoxy."

It said most Orthodox churches were members of the Geneva-based World Council of Churches, "contributing with all means at their disposal."

However, it added that the churches of Georgia and Bulgaria had withdrawn from the World Council of Churches in 1997-8, and had "their own particular opinion" about its work, while the whole Orthodox communion had "reservations concerning paramount issues of faith and order," believing non-Orthodox churches had "diverged from the true faith of the One, Holy, Catholic and Apostolic church."

"The Orthodox church's participation in the WCC does not signify that she accepts the notion of the 'equality of confessions' -- in no way is she able to accept the unity of the church as an inter-confessional compromise," the document said.

"The unity sought within the WCC cannot simply be the product of theological agreements, but must be founded on the unity of faith, preserved in the sacraments and lived out in the Orthodox church. … From its inclusion in the WCC, it does not ensue that each church is obliged to regard the other churches as churches in the true and full sense."