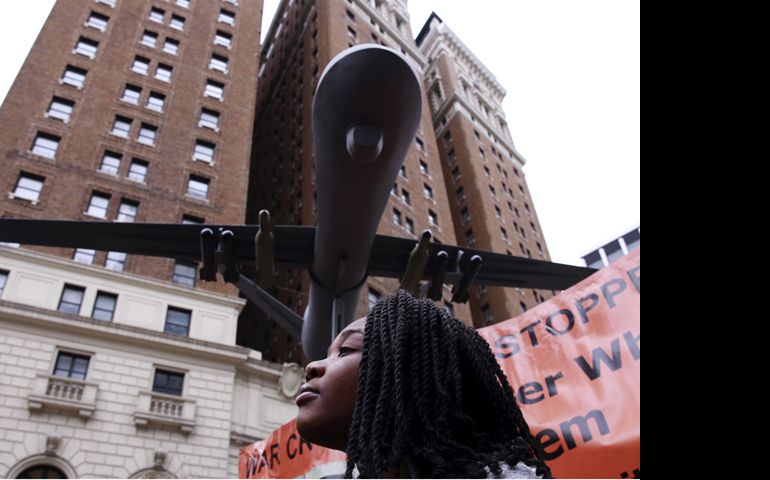 A woman listens to speakers below a model of a drone at a demonstration to protest overseas wars the United States is involved in and actions of U.S. Republican presidential candidate Donald Trump in New York on March 13, 2016. (Reuters/Lucas Jackson)
This article appears in the Camosy's Column feature series. View the full series.

President George W. Bush let innumerable attacks on his decisions, intelligence and character roll off his back while he was in office. But facing the families of soldiers killed in Iraq and Afghanistan took a heavy emotional toll on his presidency.

Bush wrote more than 4,000 letters to these families. He also met with many of them, behind closed doors and away from cameras and reporters. The dramatic scenes, according to first lady Laura Bush, were "incredibly emotional."

Today, only 51 percent of Americans feel those wars were necessary. Our attention has been drawn elsewhere and the public is now more removed from its human cost.

But as Mark Steyn pointed out at the height of the war's unpopularity, the U.S. was experiencing "historically low casualties" we still found unacceptable. Something had changed. The American people seemed to no longer accept the killing and maiming of their sons and daughters in U.S. military interventions.

So what might this mean? No more such interventions?

Hardly. We continue to pay American-style homage to the god of war by invoking the god of technology.

Buoyed by stunning advances in unmanned vehicles, robotics and artificial intelligence, the U.S. military is about to take a giant step forward in fighting wars without directly endangering American soldiers.

And the Obama administration has led the way by dramatically increasingly our reliance on drone strikes as a means to our military ends in places such as Pakistan, Yemen and Somalia.

In fact, the drone strikes are so common that they rarely make news -- at least in the United States.

Related: Drone technology raises questions on evolving nature of war and its conduct

John Oliver, on his  Last Week Tonight program, played a video of a young Yemenite man who says he now prefers gray, overcast skies to clear blue skies. Drone strikes, it turns out, are much more likely when the sky is clear.

It is difficult to know how many civilians we have killed via drone strikes because the program is still shrouded in secrecy. And, again, because there is no risk to Americans, the public seems largely uninterested in the program.

But it's not quite correct to say that the drone program carries no risks for Americans. The few drone operators who are willing to talk paint a disturbing picture of what their experiences have done to them.

Former drone operator Brandon Bryant, for instance, says the 1,600-plus deaths in which he participated turned him into a heartless sociopathic killer. Claiming that he "lost that respect for life," he now receives regular treatment at a VA hospital for post-traumatic stress disorder.

But technology has a solution to this problem as well: autonomous drones. Why subject a drone operator to PTSD when you can program a robot to do it?

And this is not an isolated development. China and Russia have pushed the U.S. into an arms race involving robots with artificial intelligence, and we are struggling to keep up.

But what happens if, say, Chinese robots that can rewrite their own code -- perhaps in response to changing situations on the battlefield -- end up defeating robots that cannot?

"The human-machine collaboration is the best choice for the military if the country wants to avoid any Terminator-esque world wars," writes Nickolaus Hines in the science and technology website Inverse. "At least until humans develop a way to program respectable ethics into autonomous killing machines."

"Respectable ethics"? Boy, would I like to be at the committee meeting that manages to decide what ethical theory is programmed into American killer robots.

But Terminator scenarios are only part of the story. With this dramatic technological development, we are now able to execute military interventions overseas without human cost.

Or, more precisely, with no human cost to Americans.

But what will be the human cost to those people our leaders assure us are the enemy? What will the cost be to children and grandparents euphemistically known as "collateral damage"?

Consider what a hawk such as Hillary Clinton might do with this capability; or Donald Trump, who has promised "ISIS will be gone very quickly" if he is elected president.

The human toll on our troops provided past presidents a check on military intervention. That check is on the way out, and this development deserves far more critical attention.