It's Francis the healer in Korea 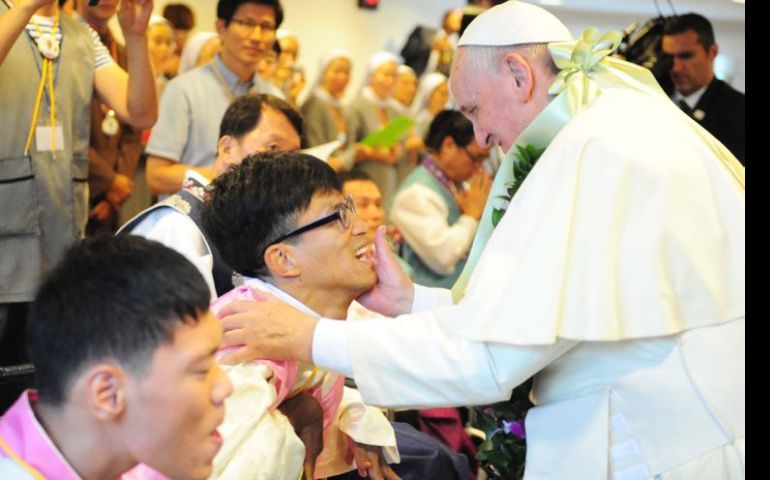 SEOUL, SOUTH KOREA -- Pope Francis on Saturday afternoon visited the hilltop community in Kkottongnae (“Flower village”). Some here have said coming to this village to visit Koreans with disabilities was the wrong choice because of its practice of gathering the disabled and separating them from wider society. More recent pastoral practices emphasize integration into society.

“Flower village,” both a state- and church-run operation, has been plagued by questions about management.

These issues, for the moment, have receded behind powerful and moving imagines of Pope Francis walking among the 50 or so children and young adults with physical and mental disabilities who greeted him. Francis took time to touch each. When asked if he wanted to sit down and rest, he responded, “I’m happy to be standing.”

Visibly moved by the residents, he took time to stand in front of each.

Photographs of Francis reaching out and touching children, kissing their foreheads and embracing the young, are appearing prominently on all the major Korean- and English-language newspapers. These images -- Francis the touching, healing, caring pope -- seem everywhere in the Korea media. Together, they enhance his image as a compassionate healer and spiritual guru with a message worth listening to.

In a society in which some continue to view disabilities as shameful, the pope’s embrace of children with disabilities -- broadcast live on Korean news channel KBS -- have been especially powerful, carrying at least two papal themes: the truths of universal human dignity and the power of healing, tied into basic human compassion, especially for the needy and vulnerable of society.

Before leaving he gave the staff a mosaic to commemorate his visit.

Later, he blessed the crowds of approximately 30,000 Catholics lining the roads, smiling and waving. Also, Pope paid a short visit to the nearby Cemetery for Aborted Children to pray for unborn child. The Holy Father clarified the sanctity of human life and its inviolability while he gave his blessing to Missionary Lee Gu-won with congenital limb deficiency.

Images of Francis walking through Kkottongnae, paying special attention to its residents, touching each individually, have been spreading and are seemingly adding to impressions already made during the first two days of Francis' visit. This is a man who cares and carries special charisma. His gentleness seems to contrast the harder, more distant images of other Korean leaders who, especially in the wake of the Sewol ferry sinking, seem quite distant from ordinary Koreans. For a severely fractured nation, one in much need of healing, Francis’ trip here appears God-sent.

For three days now, Francis’ repeated acts of simplicity and humility -- riding in a simple Kia; walking among the people; visiting with grieving families of the April 16 Sewol ferry disaster that took 306 Korean lives; offering encouragement to pressured students who worry they won’t make it into a university; reminding the wealthy few that happiness comes from not how much you accumulate, but how much you share -- are offering Koreans a model of new leadership, a leader close to the people, a leader who feels their pain, their daily burdens.

For the sake of the Korean church, with bishops who have grown accustomed to clerical privilege, the images of a simple pope seem to be especially welcoming. But Francis' trip, focused on Korean Catholics, is getting play well beyond the church. Its timing is somehow fortuitous.

More than 120 days after the sinking of the Sewol ferry, a national tragedy that is causing pain and fresh introspection, the Korean government is still unable to agree on what steps it needs to take to investigate.

Members of the families who lost loved ones in the ferry sinking are demanding an independent investigation, legislation for such investigations and prosecutions of any found guilty. Their calls have been embraced by a nation but have fallen on fallow governmental grounds.

Now comes Francis, who appears as close to the people as their government leaders are far. And he's telling Koreans that he knows they are hurting. During a Mass he celebrated on the second day of his trip here, he wore a yellow ribbon, which has become the symbol of ferryboat family support.

Into this hurting and fractured moment enters a listening Francis. As leader of a religion claiming more than 10 percent of its people, Koreans of all stripes know they must be respectful. However, they did not know what to expect until he got here.

From the moment Francis stepped onto Korean soil, he has again and again emphasized the need for healing -- personal, local, national and international. He is never sharp, never preachy, an attitude enhanced by his simple, caring manner.

At almost every stop at every event for the past three days, in word and deed, Francis has re-emphasized his theme of healing.

For those who have watched the charismatic Francis work his charm elsewhere, his Korean program is not new. What is new is that compassionate qualities are reaching Asian shores, indicating a universal appeal. Asia is a land, meanwhile, where respect of religion and spiritual has deep historical roots, though it has been buried somewhat here as this nation has moved out of poverty and into pockets of great wealth in just three decades.

Turns out Korea’s new wealth has brought problems of its own, not least of which is a growing gap between a few rich and many poor as well as questions of meaning in the midst of it all.

Francis is getting terrific media coverage and even greater reviews. Photos of the pope touching and kissing the brows of young children have been filling the entire top front pages of virtually all the English and Korean newspapers.

His smiling face is lit up on large panels of light across office buildings in downtown Seoul.

As his trip here enters its last days, if the local media is an indicator, Francis is offering the right blend of medicine -- and Koreans are more than willing to receive it.

It is difficult to know at this point what lasting impact Pope Francis might have on the local church and its mission or how the Korean bishops might respond, if they will become closer to their people.

It is less difficult to know that Korean society seems eager to receive something Francis is offering: a gentler, reconciling way forward.

It's Francis the healer in Korea

Faith brings hope even at moment of death, pope says

Breastfeeding in church? Why, naturally