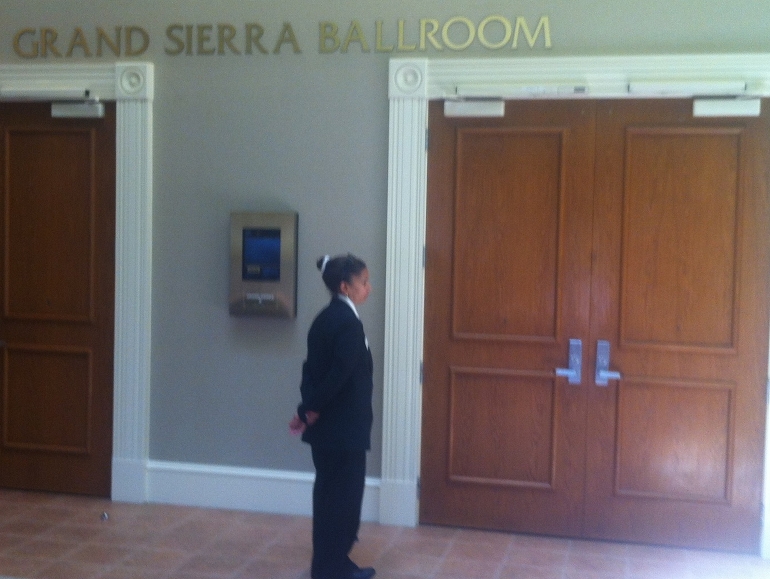 The archbishop given expansive oversight by the Vatican of U.S. Catholic sisters met Thursday here with some 825 of their representatives, speaking for about 40 minutes in a closed-door session held under lock and key.

Seattle Archbishop J. Peter Sartain was meeting with members of the Leadership Conference of Women Religious (LCWR), over whom the Vatican has placed the prelate as “archbishop delegate” and given wide power to revise statutes and programs.

The meeting was the first between Sartain and the full membership of the sisters group since the Vatican’s Congregation for the Doctrine of the Faith gave him his authority in April 2012.

Standing outside the assembly hall where Sartain was speaking, the prelate’s voice could be heard faintly for about 37 minutes. Afterwards, there was about a minute of clapping before voices of individual sisters could be heard intermittently until a scheduled break 90 minutes into the meeting.

LCWR members have been asked by the group’s leaders not to discuss Thursday’s meetings with members of the press. Additionally, the doors into the convention hall where Sartain was speaking were locked with uniformed guards placed near them to prevent unauthorized entry.

One of the organizers for the company plans LCWR’s events told NCR that the company had the microphone operators in the room sign confidentiality agreements and refrained from using wireless microphones in order to prevent bugging.

“Even our IT [information technology] conferences are not this secure,” said Kimberly Ritter, a meeting planner at St. Louis-based Nix Conference and Meeting Management.

One of the approximately eight security guards posted at the doors to the event said he was with a local security firm that was contracted specifically for Sartain’s talk.

Sartain’s address came on the third day of the annual LCWR assembly, which is being held in Orlando through Friday. LCWR represents about 80 percent of the some 57,000 U.S. sisters.

Leaders of LCWR and the individual institutes of U.S. sisters have expressed pain and confusion over the Vatican's move against their group, made in a "doctrinal assessment" published by the Vatican congregation that gave Sartain a mandate of "up to five years, as deemed necessary” to revise the group.

Meetings between Sartain and LCWR leaders in the 18 months since publishing of the mandate have largely taken place outside public scrutiny, and neither Sartain nor the sisters have publicly detailed the number or content of their meetings.

In earlier conversations with NCR, LCWR members said they expected Sartain to speak Thursday for about 30 minutes before taking questions from “several representatives” of the more than 100 tables at which the sisters have been seated during the meeting.

Earlier Thursday, Sartain celebrated Mass with the sisters, preaching that the Virgin Mary teaches Catholic faithful to hand themselves over “completely to the will of God.”

Thursday’s Mass was a special occasion for Catholics, who are celebrating the solemnity of the feast of the Assumption, when it is taught that the Virgin Mary was assumed into Heaven.

Mary, Sartain told the sisters in his homily, shows “what God himself desires to do in us all and through the church when we let the grace of God overtake us without placing an obstacle between ourself and that grace.”

Conversations at last year's LCWR assembly, held in St. Louis, focused on whether the group could acquiesce to a prelate’s control.

LCWR leaders have not said when or whether they will give details of Thursday’s meeting with Sartain. Members of the group's board are to meet at an area retreat center over the weekend to continue deliberations on the mandate.