Skip to main content
News
This story appears in the Letters from South Sudan feature series. View the full series. 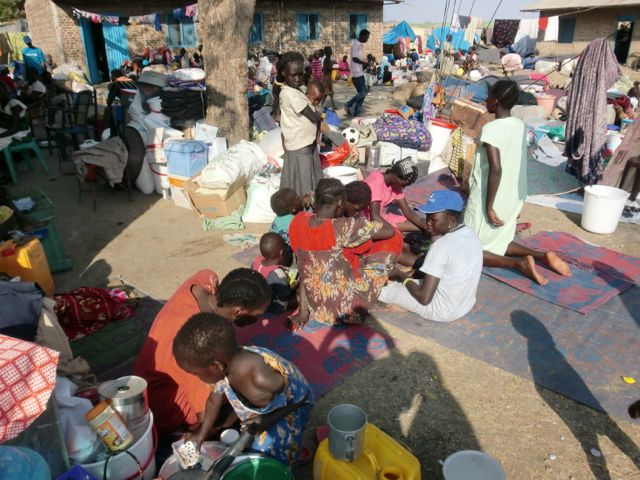 Children's lives are interrupted by the conflict. (Bill Firman)

Some time ago, a well-educated colleague in South Sudan remarked when telling a story: ‘We came to a bifurcation.’ The others present, none of whom spoke English as a first language, looked at me blankly when I asked: ‘Do you know what a “bifurcation” is?’

That is where we are in South Sudan at present. The leaders are choosing neither peace nor war. The peace talks in Addis Ababa have been suspended, without any resolution, until March 20. What are they waiting for? How many more people have to be killed? Waiting at a bifurcation is one of the worst places to be when so many guns continue to be fired without any accountability or genuine reason. This is a ‘dirty’ conflict in South Sudan where indiscriminate attacks on civilians, and their property, are being carried out by both sides. Licensed to kill and licensed to loot. Women and children are particularly vulnerable – licensed to be raped and licensed to be orphaned.

For me it is okay. I am licensed to be safe and I have a choice to stay safely behind our big concrete walls. But there are hundreds of thousands of South Sudanese who fled into the bush with little food, no clean water, no clothing. This is the dry season, the time to prepare to plant. This is not the time to be stuck at a bifurcation. When the wet season came last year, the U.N. reported that 65 percent of South Sudan roads became impassible. It is estimated that in the Bor massacre of 1991, 2,000 people were killed and 25,000 people subsequently died of starvation and disease. The potential disaster looming now in parts of South Sudan is huge. I read in a recent U.N. report, getting relief to displaced people is 20 percent logistical cost in the dry season and 80 percent supplies' cost. In the wet season, the ratio reverses.

For news to be news, it has to be new? Is that a tautology or a valid perception? South Sudan seems to have slipped from the attention of the world media. Other new conflicts have pushed it aside but less publicity does not indicate progress in resolution of the conflict. This senseless slaughter and stupidity could become far worse unless some realistic actions and decisions are taken urgently.

‘Two roads diverged in a wood … ’ Surely the road to peace and reconciliation should not be too hard to choose.

This is the sixth installment of Letters from South Sudan. We will continue share letters with NCR readers, giving a fuller picture of the complexities of political violence and hopes for peace.