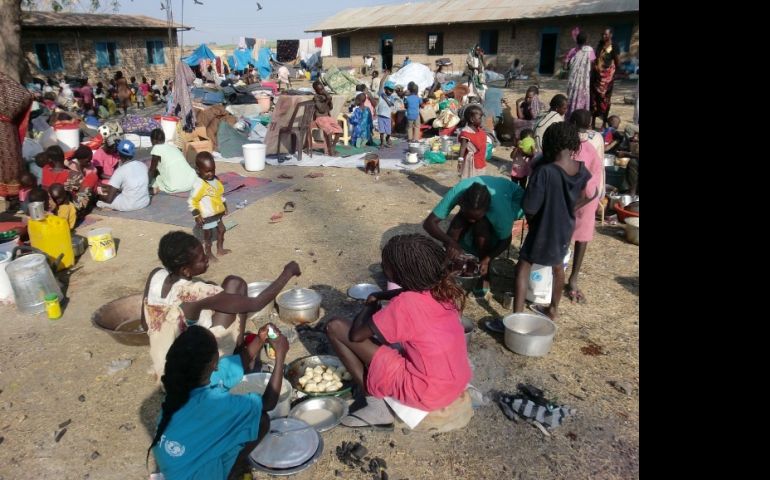 A scene at the camp in Malakal, where internal displaced persons await the rainy season that makes life even more difficult in South Sudan. (Courtesy of Br. Bill Firman)
This article appears in the Letters from South Sudan feature series. View the full series.

With fears that the situation in South Sudan is disappearing from the front pages of newspapers, the United Nations released a press statement yesterday appearing on U.N. News Centre about the desperate need for relief in the most remote areas of the country still affected by violence.

According to the release, concerns for the upcoming wet season have prompted cooperation between UNICEF and the World Food Program, both U.N. agencies, to begin a series of air drops of food, vaccines and supplies to support thousands of people in areas near South Sudan’s border with Ethiopia. This will mitigate the stress of roads made impassable by flooding

Br. Bill Firman, Solidarity with South Sudan’s executive director, has also written over the weekend with concerns about the coming wet season and hope for ways the U.N. may be able to help.

The top of a good pie looks quite firm and stable as you look down upon it. That’s what I’m seeing in South Sudan at present. Where I am, life seems normal and calm. One could easily forget what is happening in some parts of the country. But who knows what lies beneath the crust?

We know there is almost nobody in Malakal except soldiers, and we hear dead bodies lie unburied in the streets. Reports from Malakal and other areas of conflict are vague and sometimes contradictory. There are claims and counter claims. The last few weeks have been relatively quiet, it seems to me, yet we really have no idea if the crust is about to break apart.

Are there only a few, isolated bad spots beneath the crust or it is all festering and getting worse? Who can provide the necessary antibiotic? Who is doing what, to whom, and for what purpose? I don’t really know. What I do know is that many innocent people have had their lives greatly disrupted not only by the violence in South Sudan but by the continuing struggles in surrounding regions. I fear the coming wet season may hasten the collapse of the crust. Maybe the U.N. umbrella will be big enough to protect the crust, but why is the U.N. itself being attacked so much by politicians? Sorry, I can’t answer these questions. I can’t see more than the crust. I may not be Solomon but somehow my instincts tell me now is not the time to try to poke my fingers inside this pie.

Photographer Paul Jeffrey is in the area shooting for the ACT Alliance. He shared some recent photos with Br. Firman, who wrote that “they tell the story of the desperate situation of many people in South Sudan Today.” Jeffery has posted an earlier report and photos on his website.

This is the eighth installment of Letters from South Sudan. We will continue share letters with NCR readers, giving a fuller picture of the complexities of political violence and hopes for peace.