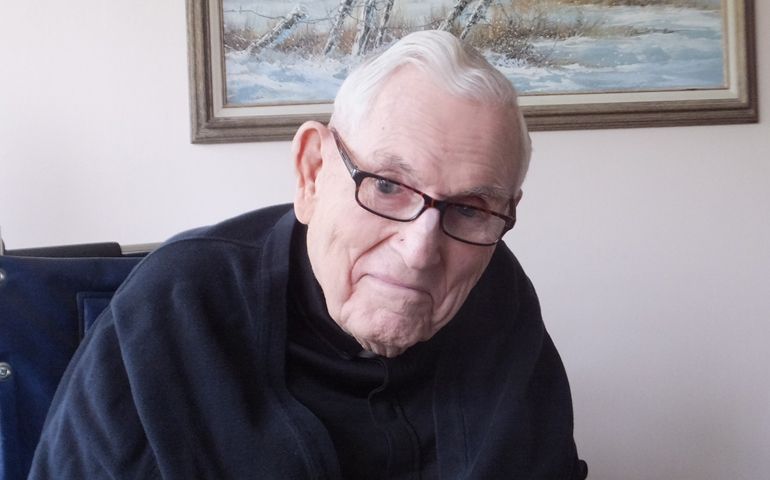 Update: The Newark archdiocese has announced funeral arrangements for Archbishop Gerety. His body will be received at the Cathedral Basilica of the Sacred Heart in Newark at 3 p.m. Sunday Sept. 25. Public viewing will be held 3:30 to 6:30 with vespers at 7 p.m.

The visitation will reopen Monday Sept. 28 at 10:30 a.m. and remain open until 2:30 p.m. Archbishop John J. Myers will preside at the funeral Mass beginning at 3 p.m.

Interment will immediately follow Mass in the crypt of the cathedral basilica.

Just got word from the Newark, N.J., archdiocese on the death of Archbishop Emeritus Peter L. Gerety.

The Most Reverend Peter Leo Gerety, Archbishop Emeritus of Newark, entered eternal life on Tuesday, September 20, 2016.   He was 104, and at the time of his passing, was the oldest Catholic bishop in the world.    The retired Archbishop passed peacefully at about 8:20 p.m. while in the care of the Little Sisters of the Poor at St. Joseph’s Home for the Elderly, Totowa, NJ.

Gerety was ordained a priest of the Hartford, Conn., Archdicoese in 1939 while studying in Paris, France.

“I was really living in the waning years of the Counter-Reformation,” that had followed the Protestant reformers of the 16th century. The period lasted several centuries and produced “great saints, great missionary activity, great music and art” as well as the Latin Mass, which Gerety said he loved.

But as a seminarian at St. Sulpice in Paris reading the works of theologians and church historians in their original French, Gerety became aware that “the world had moved on and time had come for changes.” Wouldn’t it be wonderful if his Brievary could be in English rather than Latin, if Mass could be in English or French or Spanish, all of which he knew well?

… had to learn quickly how to be a bishop in the new era that was emerging. He said he gleamed much from the pastoral style of John XXIII, who was “not concerned with condemnations,” but who wanted the church to “make use of the medicine of mercy rather than that of severity.”

While he read and studied the Council’s documents on “the inner-life of the church” and its relations to other faiths, on liturgy and on the Bible, he was drawn most to Gaudium et Spes or the PastoralConstitution on the Church in the Modern World.

The document dealt with “all the joys and sorrows of humankind.” Gerety saw this. In his 20 years as an active bishop, he took his lead from Gaudium et Spes. It prompted him to involve the laity in the work of the Lord in this world. It helped him to see that family life must be strengthened and that separated, divorced and remarried Catholics must not be alienated from their church, but could be ministered to by an office in the archdiocese for those with disrupted marriages.

As a priest and bishop Gerety was heavily influenced by the Civil Rights Movement. The obituary from the Newark archdiocese says, “He founded an interracial social and religious center, the St. Martin de Porres Center, which became St. Martin de Porres Parish in 1956 with Fr. Gerety as its first pastor. ... He founded the New Haven chapter of the Urban League and was a member of the Connecticut State Committee on Race and Religion and the National Catholic Conference on Interracial Justice.” He continued similar work when he moved to Newark in 1974.

Under his guidance, a parish renewal program began in Newark that would evolve into RENEW International, which today operates in 126 U.S. dioceses and in 14 nations.

When Lefevere asked him about his legacy, she wrote, “Gerety would not shift even a shoulder into the limelight.”

He said the church is still in “a period of transition and rapid cultural change.” But he cited “the enormous renewal that has occurred, the deepening of prayer life and the involvement of men and women of the laity in the work of the Lord in this world.”

“Love is the test given to us by the Lord Himself,” he said, echoing Jesus’ words: “Love one another as I have loved you. … Where love is absent, He is too.”

Trump vs. the politics that Christianity requires

Music, journalism, slang, swagger — the Black prophetic tradition is all around us