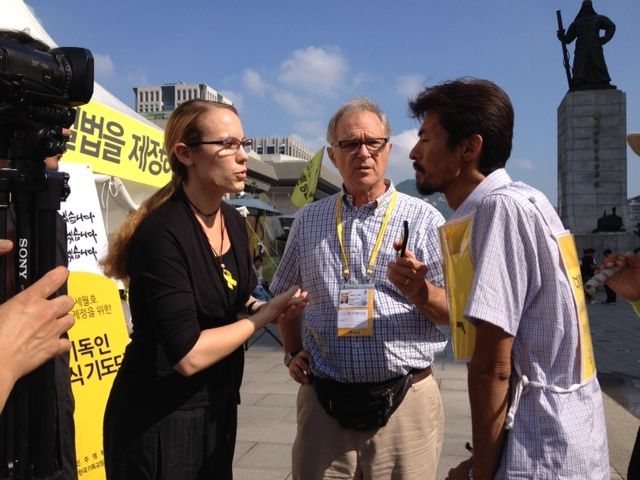 Less than a day after South Korean President Park Geun-hye told Pope Francis, here on a five-day visit, that she hoped his trip would "begin an era of peace and reconciliation," her police were out in force Friday and cordoned off and confronted the man most widely seen as the soul of the vulnerable and voiceless of South Korea.

There is irony here. Pope Francis, speaking Thursday afternoon to Park, assembled dignitaries, and later to the Korean bishops, also called for reconciliation. He told the bishops they must live in solidarity with the poor and vulnerable.

No one in South Korean society more visibly represents the vulnerable of the nation than does Kim Young-oh, who has been fasting for 33 days while demanding the Park government set up an independent investigation into the ferry disaster that took his daughter's life, calling for legislation to prosecute anyone found culpable.

Korean Catholics are celebrating two feast days Friday. The first, Liberation Day, a national holiday, commemorates the Korean liberation from Japanese rule at the end of World War II. The second is the feast of the Assumption. Offices are closed. The streets of the city are quiet. The exception is City Hall plaza, where countless thousands are gathered in support of the families of the ferry disaster. Countless yellow ribbons, prayer ribbons, adorn the plaza.

Pope Francis on Friday morning was celebrating Mass in Daejeon, South Korea, 90 miles south of here. He will spend the rest of the day with young Catholics there, gathered for Asian Youth Day. He briefly met families of ferry victims as he stepped off his plane Thursday. Today, he will encounter young Koreans the very age of those who died in the ferryboat sinking, which took the lives of 306, most of them high school students, one of them Kim's 17-year-old daughter, Kim Yoo Min.

Three days ago, on the 30th day of his fast, Kim told me his fondest memory was of his daughter coming up from behind him each day, hugging him and calling out, "Father, Father."

Today, on the 33rd day of his fast, I visited with Kim again and asked him how his spirits were holding out. "I am holding on," he said. "I am hoping I can meet Pope Francis. I will beg him to support our demands for an independent investigation," he told me through an interpreter.

Scores of ferry victim relatives began a fast one month back, trying to draw attention to their demands. All but Kim has dropped out. He is weak and bone thin. He has a difficult time standing. He leaned upon a cane when I met him Friday.

"I'm still hopeful I can speak with the pope," he repeated more than once.

As the days have passed, Koreans have focused more and more on Kim, seemingly placing their own hopes on his weakened shoulders. He has become a national symbol, increasingly a sign of a divide between the people and their government. He has become the voice of the marginalized that Francis on Thursday called his bishops to become. Kim's picture can be seen on placards throughout the city. His face appears in newspapers daily. They are following his fast, which daily seems to grow in importance to the Korean people.

As Kim and I spoke together on the plaza where he has remained for the past month, he walked slowing, leaning at times on his cane. As we proceeded, dozens, then scores, of Korean police began forming a line in front of us. Soon we were being cordoned off, and the police told Kim he would have to turn around, that he could no longer walk forward.

Within minutes, what became a confrontation between one man and a few dozen police had escalated as scores of police added to the ranks of those stopping Kim.

Within a few more minutes, dozens, then scores, of Kim supporters were lining up face-to-face with the police. The Kim supporters started chanting through megaphones, demanding legislation to investigate the ferry disaster. The protesters held placards over their heads -- and in the faces of the police -- with Korean characters printed on them demanding the legislation.

Kim stepped back and returned quietly to his white tent at the foot of the plaza.

Saturday, on the same plaza where the police confronted Kim, Pope Francis is set to beatify 124 18th- and 19th-century martyrs. The police want Kim and the other ferry victim families out of Gwanghwamun Plaza by the end of the day Friday so it can be readied for the beatification ceremony.

The families have reluctantly agreed to leave by 4 p.m. to avoid violence. They have been told by city officials they can return to the plaza after the ceremony.

While Catholic officials here hope the beatification ceremony will stir the souls of the faithful, renewing their faith as Christian disciples, it is clear that many Korean souls have already been stirred, and that in the process, they are giving more attention to the vulnerability of others as well as their own vulnerability.

One day before a planned historic beatification of Korean martyrs, this nation, including the Catholics within it, are struggling to seize the ghosts of the past, martyrs from different ages -- 19th-century Catholics and 21st-century children -- implore their memories to renew the hearts and souls of a nation to give it direction in the years ahead.

How Francis understands this moment and helps shape it in the hours ahead could make a significant difference for the health of the church and wider Korean society for years to come.

There are early indications he does, and that he is ready to touch the souls of this nation. In Daejeon on Friday, in his Angelus remarks, he entrusted to Mary "all who lost their lives in the sinking of the Sewol ferry, as well as those who continue to be affected by this great national disaster."

"May the Lord," he prayed, "welcome the dead into his peace, console those who mourn, and continue to sustain those who so generously came to the aid of their brothers and sisters. May this tragic event, which has brought all Koreans together in grief, confirm their commitment to work together in solidarity for the common good."

[Thomas C. Fox is NCR publisher. His email address is tfox@ncronline.org. Follow him on Twitter: @NCRTomFox. Catholic News Service contributed to this report.]