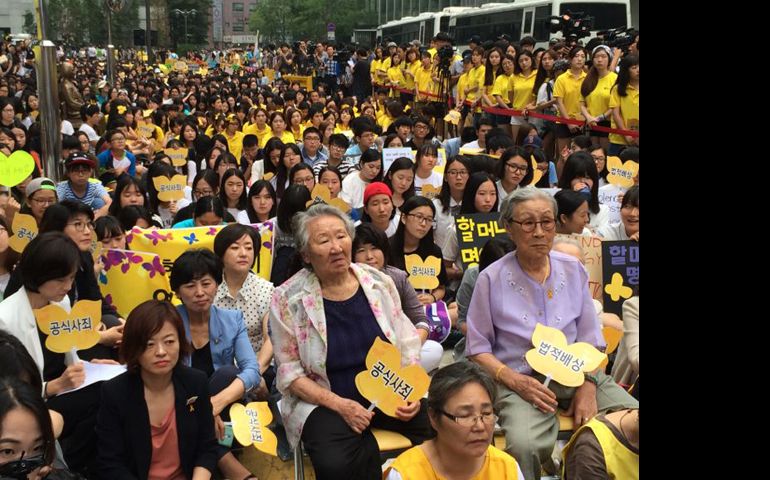 An estimated 2,000 people attended a rally Tuesday in Seoul, South Korea, in front of the Japanese embassy. (NCR Photo/Thomas C. Fox)
This article appears in the Francis in Korea feature series. View the full series.

Seoul, South Korea — An estimated 2,000 Korean protesters packed the street in front of the Japanese embassy here Tuesday, again calling upon the Japanese government to formally apologize for forcing tens of thousands of Korean women, some reportedly as young as the age of 12, into sexual slavery during World War II.

For more than an hour, speaker after speaker, including the president of the committee for peace and justice in the Seoul archdiocese, Fr. Andrew Park Dong-ho, cried out for the Japanese government to acknowledge wrongdoing, to apologize and to compensate the women.

Packed into neat, tight rows, demonstrators listened to speakers and loud music, clearly aimed at piercing the walls of the embassy only a few feet away.

Hundreds of Korean police cordoned off the area, providing room for the protesters, separating them from ongoing traffic.

Bad memories linger in Asia. The issue of sexual slavery is one of them. The Korean women who were forced into sex slavery are euphemistically called "comfort women."

Pope Francis will meet with several of these women on the last day of his trip here, Aug. 18, as part of a reconciliation Mass to be held in the Seoul cathedral.

Meeting with the women will please most Koreans. His comforting words will add to the international acknowledgement Koreans want to gain, if only as a means of adding pressure on the Japanese.

However popular the gesture -- and it will be one of the most popular Pope Francis will make -- it will not be without some negative consequences. Japanese governments have not acknowledged sexual conduct of the Imperial Army. To the degree there has been any talk, it has been to the effect that the women engaged in sexual activities voluntarily.

It was not until the 1990s that the issue of the comfort women surfaced in a serious way. That's when some of the women came forward and started sharing their stories.

Researchers picked up the task, publishing studies that confirmed the charges, placing numbers of sex slaves up to 200,000. Many of the women were abducted and shipped to the front lines, where "comfort stations" were set up for Japanese troops.

Most of the women have now died; those still alive are in their late 80s and 90s.

Each Tuesday at noon, a few of the women protest in front of the Japanese embassy. They have been doing this for years. Hundreds of supporters sometimes rally with them.

Tuesday was closest to Aug. 14, the day designated by the international community to recognize these human rights violations. So the crowds were many times larger than the normal weekly protests, organizers said.

Pope Francis' meeting with a few of the women will be part of a larger reconciliation ceremony to be held in the Seoul cathedral. For many Koreans who do not profess the Catholic faith, this ceremony will be one of interest.

But the ceremony is not without its own conflict. Some Catholics asked the papal planning committee to hold the reconciliation ceremony and Mass on a large and open field near the North and South Korean border. These Catholics said such a location would have had more symbolic power and would have allowed many more people -- perhaps into the hundreds of thousands -- to attend.

Instead, the planning committee settled on holding the gathering in the cathedral, which holds up to 1,000.

Reconciliation between North and South is a complex issue. Some observers here say the goal has much popular support, but that powerful interests do not want it to occur.

Benedictine Sr. Stella Soh Hee-suk places most of the blame on the United States, which, she says, props up the South Korean government with U.S. military arms, a profitable enterprise for weapons makers.

Were the U.S. to drop out of the picture, reconciliation would be a far easier task, she said, adding the South and North Koreans are quite able to settle their own differences. She added that maintaining tensions between North and South aids the South Korean government and allows the U.S. military to maintain its presence in Asia.