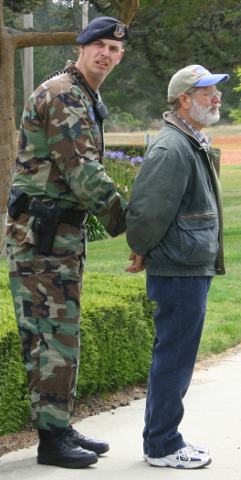 The Catholic Worker who went to the Supreme Court on Wednesday expecting to hear arguments about free speech and the First Amendment instead got a lesson on property law.

Apel, a Catholic Worker from Guadalupe, Calif., has been protesting at Vandenberg Air Force Base monthly since 1996. In 2007, he received a lifetime ban from base property for acts of civil disobedience, but he kept up the monthly protests until 2010, when a magistrate judge ruled he was violating the ban and bar letter.

Apel appealed the decision, and the appeals court of the Ninth Circuit ruled in his favor, saying he was exercising his First Amendment right to free speech.

But the Justice Department is asking the Supreme Court to overturn the appeal court decision, claiming that banning Apel was a matter of national security and the military had jurisdiction over the site of Apel's protests, even though the base granted a highway easement to the state of California and the county of Santa Barbara.

"Look at the easement," Justice Anthony Kennedy said, according to Denniston. "It makes clear that the [base] commander has control over the property."

Erwin Chemerinsky, dean of the University of California, Irvine law school and a constitutional lawyer who represented Apel pro bono, tried to steer the justices away from the question of the easement, arguing instead that banning Apel from a public roadway violates of his First Amendment rights.

Justice Antonin Scalia responded harshly to the issue of free speech, telling Chemerinsky: "You can raise it, but we don't have to listen to it," according to The Associated Press.

Cherminsky brought up a similar case to Apel's, U.S. v. Flower, in which the Supreme Court voted in favor of a man who was distributing leaflets on a public road on a military base.

But neither Kennedy nor Scalia wanted to hear it.

Denniston wrote that "Kennedy quickly cut him off: 'That's a First Amendment case,' " and Scalia said, "We are only interested in whether the [easement] statute applies."

The other justices ignored Cherminsky's free speech argument, asking detailed questions about the easement instead.

They "raised points about how property gets managed, when some members of the public are given temporary access, what difference it makes when a fence is put up, and the scope of a property owner's right to exclude others," in turn, forcibly "moving even further away from Apel's First Amendment grievance," Denniston wrote.

The AP explained, "The Obama administration is eager to get the ruling from the 9th U.S. Circuit Court of Appeals erased from the books because it could affect similar arrangements at roughly three dozen bases in the nine Western states covered by the San Francisco-based court."

A ruling is expected by late June.