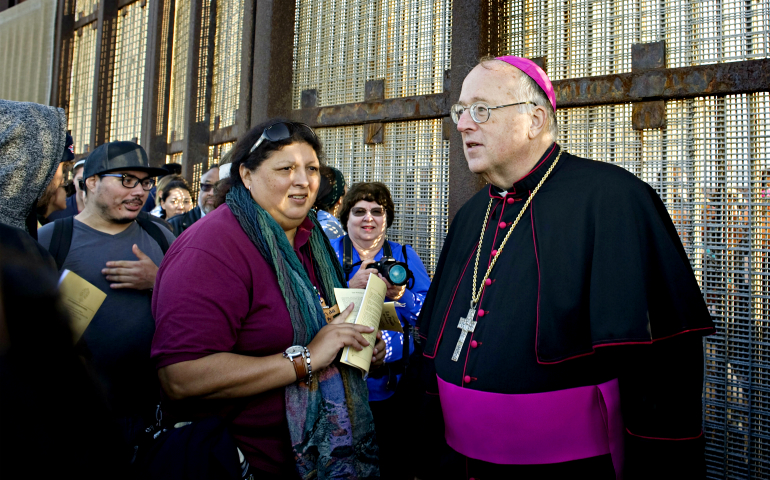 I began my observance of Advent this year by attending an interfaith service on behalf of newly vulnerable populations who are experiencing hate crimes after the election of Donald Trump.

Organized by the Songtsen Gampo Buddhist Center of Cleveland, representatives from the world's religions read powerful sacred texts affirming that God is a God of justice who wishes us to love one another. Ani Palmo, a Buddhist nun, challenged us to walk our talk:

Let us remember that those who are drawing swastikas, screaming at women in hijab, and sending their children to school chanting, "build a wall," are going to church on Sundays.

We have been preaching forever about love and compassion. But what good is it to profess love in our places of worship if we haven't the courage to carry that love into the outer world?

To our LGBTQ friends, to people of color, to women, to Muslims, to immigrants, to all and any who feel disenfranchised, to all who are suffering: We pledge to be a refuge for you. You are welcome with us, you are loved, and we will do everything in our power to support, protect, and stand with you in this time of uncertainty.

I wondered what we Catholics are doing to live out one of the Catholic "sacred texts" read that evening:

The dignity of the human person and the common good rank higher than the comfort of those who refuse to renounce their privileges. When these values are threatened, a prophetic voice must be raised [Pope Francis, Evangelii Gaudium].

The answer is a resounding yes, and you won't believe who they are.

Aside from the usual suspects — Catholic laity and nuns — Catholic bishops are exercising prophetic leadership in opposing the massive deportation of refugees.

Perhaps they were emboldened by a challenge from the Vatican nuncio to the U.S., Archbishop Christophe Pierre, who said at a Nov. 11 gathering at Georgetown University, "The pope is more prophetic than the Catholic bishops here today" and called on the U.S. church "to assume a prophetic role."

Soon after, the U.S. Conference of Catholic Bishops issued a polite but strong letter to President-elect Donald Trump, promising to "work to promote humane policies that protect refugees and immigrants' inherent dignity, keep families together, and honor and respect the laws of this nation."

In quick succession, Bishop Robert McElroy of San Diego and Bishop Nicholas DiMarzio of Brooklyn, N.Y., pledged to stand with immigrants against deportations.

On Nov. 30, McElroy called Trump's promises of massive deportations a "grave evil" in which "the church can never acquiesce" and suggested that a new civil rights campaign may be necessary.

In a Dec. 4 letter read at all Masses, DiMarzio noted that while there is a need to "restore sensible immigration policies," massive deportations "will not guarantee security."

"The law of God takes precedence over human laws," the bishop said, and promised to support immigrants threatened with deportation. The Brooklyn diocese also sponsored an immigration rights seminar so attorneys could help refugees understand their legal rights.

Already last July, Bishop Daniel Flores of Brownsville, Texas, publicly described participating in mass deportation policies as "formal cooperation with an intrinsic evil," noting that in some cases "we are dealing with placing them in proximate danger of death."

The U.S. bishops also named the Dec. 12 feast of our Lady of Guadalupe a national day of prayer for the care of migrants and refugees. A newly established working group of bishops, chaired by Los Angeles Archbishop José Gomez, created a host of prayer and activity resources specifically designed for parishes that encourage people to visit www.justiceforimmigrants.org to lobby congressional representatives and organize local groups to share the immigrant experience.

A doctrinal conservative, Gomez is on fire with this issue. Two nights after the election, he gave a passionate reflection at an interfaith prayer service saying: "Tonight in America — children are afraid; men and women are worried and anxious, thinking about where they can run and hide. This is happening tonight, in America."

Gomez recently wrote an in-depth piece pointing out that a "broad public consensus" already exists for granting immigrants a path to citizenship. He notes that undocumented workers have become scapegoats for problems caused by globalization and deindustrialization:

This is not a "white working class" issue only, as the media reports it. Whites, Latinos, Asians, blacks, and others are all suffering from the breakdown of the family and the vanishing of good-paying jobs that make it possible to support a family.

In the meantime, hundreds, if not thousands of Catholic laity and sisters are working tirelessly on behalf of refugees, providing shelter and making sure people understand their human and legal rights.

Taken together with major U.S. cities and colleges and universities pledging to be sanctuaries for undocumented immigrants, I expect to see widespread resistance if Trump moves ahead with his extremist immigration plan.

God's prophetic Spirit is at work.

Will you raise your prophetic voice too? Visit www.justiceforimmigrants.org.