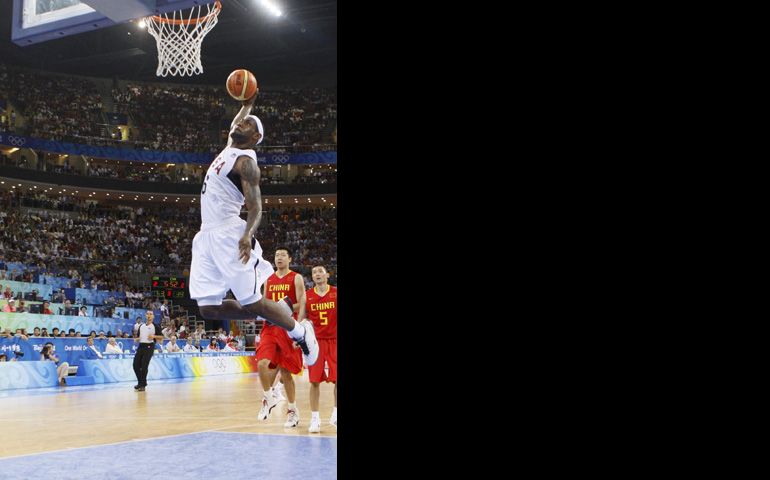 LeBron James goes for a slam-dunk against China during a basketball game at the 2008 Olympic Games in Beijing. (CNS/Reuters/Lucy Nicholson)

Things are pretty close to paradise around here in northeast Ohio, and it's not because we're hosting the 2016 Republican National Convention. I was caught off-guard by an unexpected lump in my throat last week when I read LeBron James' letter in Sports Illustrated announcing he was coming home to play with the Cleveland Cavaliers. It wasn't only that he was returning; it was why.

"My relationship with Northeast Ohio is bigger than basketball. I didn't realize that four years ago. I do now," James said.

You see, LeBron isn't just any basketball rock star. He's our rock star. We watched this young phenom from the Akron projects win game after game for his high school, St. Vincent-St. Mary (yep, a Catholic school). The crowds got so large they had to move the games out of the antiquated gym into larger venues.

But our love affair with "the king" began in earnest when, as the 2003 NBA No. 1 overall pick, he was drafted by the Cavaliers. Then, in 2007, the Cavs went to the NBA finals for the first time. We lost in a sweep to San Antonio, but still, it was the finals. High hopes persisted until 2010, when things went tragically south with a semifinal loss to the Celtics. James ripped off his Cavaliers jersey on his way off the court, a sad portent of things to come.

Weeks later, our beloved LeBron jilted us to go to the Miami Heat. Worst of all, he did it on ESPN, the ultimate humiliation for this proud Rust Belt region. It was understandable that LeBron wanted a championship, but it broke our hearts. He ditched us, and on national TV? Fans were bitter. They stomped on their No. 23 jerseys before burning them to a crisp. Managers and especially the owner were outraged. Dan Gilbert wrote a nasty, mean-spirited letter calling the move a "cowardly betrayal."

Soon, "King James" was better known around town as "He Who Shall Not Be Named," a touch of dark humor evoking Harry Potter's dastardly villain and the fact that no one wanted to talk about it anymore. People were upset, and they stayed upset for a very long time. They also watched every move James made. Yep, we still loved and hated the guy. It's said that the opposite of love isn't hate, it's indifference. No one here was ever indifferent about LeBron James.

While Clevelanders were hurt and vindictive, Akron never abandoned their hometown-boy- made-good. And James didn't abandon Akron. His LeBron James Family Foundation funds an impressive array of programs to help struggling children and their families. The foundation even funded a new state-of-the-art gym and sports uniforms for LeBron's alma mater, St. Vincent-St. Mary. This excerpt from his 2009 book, Shooting Stars, explains why:

Because even in my darkest days growing up ... Akron always meant people taking care of things, people taking care of each other, people who found you and protected you and treated you like their own son even when you weren't. With a population of about 225,000 when I was growing up, it was still small enough to feel intimate, a place you could put your arms around, a place that would put its arms around you. ... I don't remember how old I was exactly, maybe 8 or 9. But I promised myself ... that one day I was going to put Akron on the map.

Why would James, at the peak of his basketball career, choose to return to northeast Ohio? If we can credit any one thing, it is the faithfulness of family, friends and the people of Akron. We can also credit the man LeBron James has become. I'll let him say it in his own words:

I feel my calling here goes above basketball. I have a responsibility to lead, in more ways than one, and I take that very seriously. My presence can make a difference in Miami, but I think it can mean more where I'm from. I want kids in Northeast Ohio, like the hundreds of Akron third-graders I sponsor through my foundation, to realize that there's no better place to grow up. Maybe some of them will come home after college and start a family or open a business. That would make me smile. Our community, which has struggled so much, needs all the talent it can get.

In Northeast Ohio, nothing is given. Everything is earned. You work for what you have.

Sportscasters say the Cavaliers now have a good chance of eventually winning that long-coveted NBA championship. And LeBron is determined to make it happen:

When I left Cleveland, I was on a mission. I was seeking championships, and we won two. But Miami already knew that feeling. Our city hasn't had that feeling in a long, long, long time. My goal is still to win as many titles as possible, no question. But what's most important for me is bringing one trophy back to Northeast Ohio.

To say we were ecstatic with Friday's announcement doesn't begin to cover it. Local TV stations interrupted regularly scheduled programming for two hours at a pop to report the developing story. "I'm Coming Home" and "Forgiven" T-shirts quickly materialized out of nowhere. Within five hours, every season ticket was sold out. Local pizza joints created "King Supreme" specialty pizzas. People honked and hollered all over the city.

"It's great to watch our city forgive ... there is an aura of love all over today," one fan said to a TV reporter.

"The city gave its heart to LeBron and he's giving his back," another said.

Oh, we know there's money involved. Lots of it. LeBron's financial deal is around $20 million a year. He probably could have negotiated even more with other teams lusting after the best player on the planet. A lesser-known fact is that when James left town, an estimated $48 million annual boost to the local economy went with him.

When LeBron went to Miami, a piece of northeast Ohio went with him, but it wasn't the financial piece. He is our poster child that perseverance and hard work can make struggling people and their communities rise again. He returns to us now a better and wiser man. (Bonus: He's an even better basketball player.) We are proud of who he has become.

LeBron James' focus on giving back means great things for our region, even if the NBA championship ultimately eludes us. His return witnesses the amazing truth that, at least for some great athletes, there's more to big-league sports than money.

Most of all, LeBron is helping the people of northeast Ohio believe in our communities again.

Editor's note: We can send you an email alert every time Christine Schenk's column, Simply Spirit, is posted. Go to this page and follow directions: Email alert sign-up