Skip to main content
Vatican
This story appears in the Four Years of Francis feature series. View the full series. 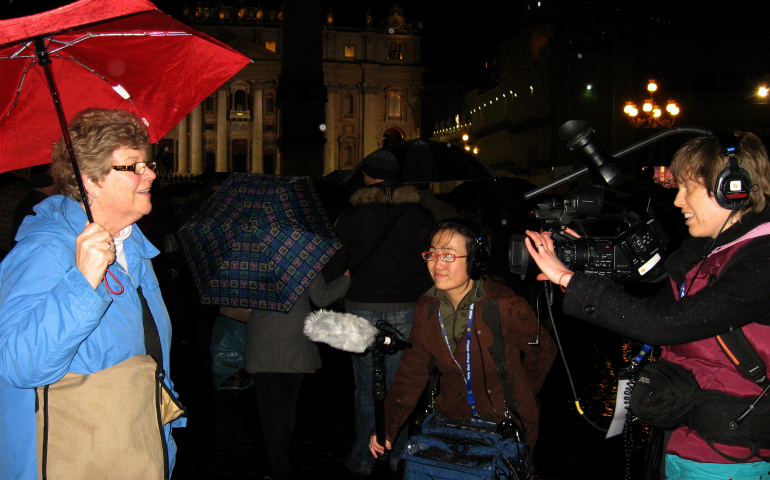 The filming crew of "Radical Grace" interview the author, left, in St. Peter's Square after Pope Francis was elected, March 13, 2013. (Courtesy of FutureChurch)

Four years ago this week, I stood in St. Peter's Square nervously watching white smoke billow from the Sistine chimney. Rumor had it that if the election went quickly, as this one had, the new pope would be conservative. This did not bode well for advancing gender balance in church decision-making.

But as Jorge Bergoglio bent low to receive the blessing he had humbly requested from thousands of rain-soaked Catholics, I dared hope that a new respect for the spiritual giftedness of all the people of God (and not just clerics) might at last be at hand.

Four years on, what can be said of Francis' papacy as it relates to women in the church?

(I leave it to others to chronicle achievements in other areas.)

If you listen only to sound bites, one would think that Pope Francis has shut the door on any possibility of women's fuller participation in all the ministries of the church. Last November he reiterated that "the last word is clear," on women's priestly ordination.

If you explore more deeply, however, there is much to praise. Here is my own list.

Pope Francis has a clear respect for women working among disadvantaged populations. He met with members of the Union of International Superiors General last May and agreed to establish a commission on women deacons to better serve the people of God.

Francis ended the ill-advised investigations of women religious and actively praised apostolic women's communities. This long-awaited affirmation of Vatican II interpretations of religious life by church authorities has put a stop (at least for now) to decades-long attacks from church conservatives.

For the first time a pope met with members of the Leadership Conference of Women Religious, the body that represents 80 percent of all U.S. sisters. Women religious are no longer excluded from plenary sessions of the Vatican office that oversees them. (It is hard to believe they were excluded to begin with, but I show you our sexist history.)

A 37-member Women's Consultation Group has just been named to the formerly all-male Pontifical Council for Culture, and some progress has been made to increase the number of women in Vatican positions.

But perhaps the biggest change is a new openness to listening to the experiences of women rather than avoid or ignore them. This is very evident in the Voices of Faith events held annually inside the Vatican on March 8, International Women's Day. For each of the last four years women have discussed their concerns about justice, peace and involvement in the church. At the same time, an increasing number of consultations with and about women have been held in various venues around Rome.

Then, last June, the Women's Ordination Worldwide (WOW) coalition was for the first time permitted to prayerfully demonstrate outside St. Peter's Basilica before the Vatican Mass for the Jubilee of Priests began. And there are signs that WOW's simultaneous three-day June conference, "Open the Door to Dialogue," may be bearing fruit.

In February, Jesuit Fr. Giancarlo Pani published what would become a controversial article in La Civiltà Cattolica, an Italian Jesuit journal, whose editor, Jesuit Fr. Antonio Spadaro is known to be close to Pope Francis. According Sandro Magister, a frequent Francis critic, Pani "calmly rips to shreds" the idea that Pope John Paul II uttered the last word on the possibility of women priests. Magister is predictably critical of Pani's opinion, which he quotes in part:

One cannot always resort to the past, as if only in the past are there indications of the Spirit. Today as well the Spirit is guiding the Church and suggesting the courageous assumption of new perspectives.

Under Pope Benedict XVI and Pope John Paul II, discussions about women's ordination to the diaconate or the priesthood were actively suppressed. In Francis's papacy, they are occurring without apparent fear of repercussions. This pope is a great believer in discernment. He does not shy away from controversial issues, even those, it seems, that are related to women's full inclusion in church decision making.

Such discussions are important for both women and men in our church today.

I joined Sr. Simone Campbell and Rebecca Parrish on a panel addressing (among other things) what it means to be a "radical feminist nun" [sic] in the context of a patriarchal church, as chronicled in Rebecca's documentary film "Radical Grace."

Simone spoke of the need to allow our hearts to be broken by the pain of the world so that hope can enter the darkness.

I spoke about Jesus and his "radical feminist" disciples whose counter cultural evangelization via their own social networks literally transformed the Roman Empire.

Jesus was a community organizer, I said, and everyone passionate about justice was on a spiritual path.

Later, dozens of self-described "formerly Catholic" women approached me with tears in their eyes. I have given many presentations, but never have I experienced so many Catholic women who were touched this deeply.

They loved Catholicism, they said, but felt they had to leave it because they could not reconcile being Catholic with being feminist. Our witness helped them realize it was possible to be both.

Pope Francis is not by any stretch a feminist. But he is open to the Spirit, and he believes in discernment. And, of course, we know that God is a feminist!

For God created humankind in the divine image, in the image of God they were created; male and female God created them. (Genesis 1:27)

So, it is a matter of time and of trust in the Spirit who is well able to heal ecclesial misogyny and guide the people of God to "courageous new perspectives."