Stand your ground for country mice -- and city mice, too 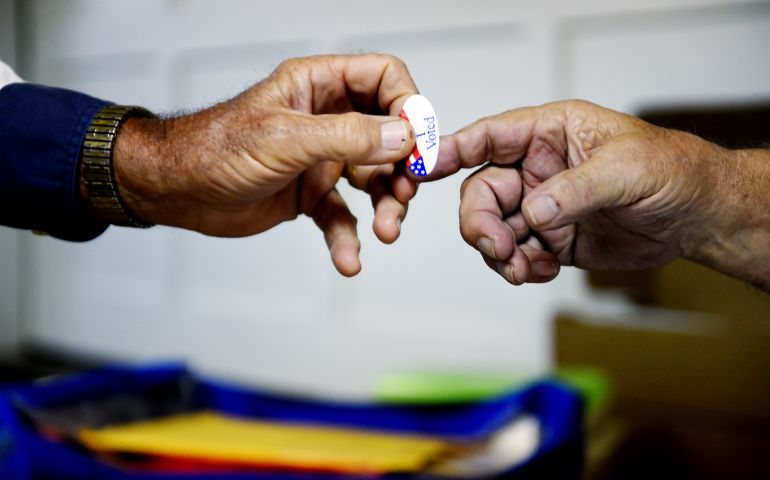 A poll volunteer hands out an "I Voted" sticker at a rural polling place during the U.S. presidential election in Stillwater, Okla., Nov. 8. (Newscom/Reuters/Nick Oxford)
This article appears in the Transition to Trump feature series. View the full series.

This is the most painful column I have ever written.

With so many other women and men, I waited eagerly on Nov. 8 to celebrate Hillary Clinton as the first female president of the United States. As the returns came in, I began to feel physically ill. At 1:30 a.m., I fell into a troubled sleep, only to discover upon awakening that my worst fears had been realized.

A candidate who tacitly admitted to sexually assaulting women, played havoc with the truth, and shamelessly pandered to voters' racism, sexism and xenophobia had been elected to my country's highest office.

For two days, I walked around feeling hollow and disoriented.

Praying didn't help much but I still prayed — a lot.

Then my default political junkie mode returned — with a vengeance. I needed to understand how this had happened. What made nearly half of my fellow citizens vote for a man I could never see myself respecting?

I searched for understanding. And I searched for signs that a Donald Trump presidency would not be the unmitigated disaster I feared. Here are a few observations:

It is not a bad thing that newly enfranchised elements of our electorate were heard, particularly rural working-class people. Not all of the country-mice-who-roared are racist bigots. They voted for President Barack Obama in 2008 and 2012. In this election, they overlooked Trump's destructive rhetoric apparently out of a desperate frustration with dysfunctional governance that has too long ignored poverty and income inequality, especially in rural areas.

They made a mistake in voting for Trump, but I respect their right to make it.

I, too, am frustrated with dysfunctional Washington politics. We share that in common. Unfortunately, rural working-class voters backed the wrong horse. The Republican establishment obstructed Obama administration efforts on behalf of ordinary workers from day one. A coalition of an attention-hungry Trump and Republican leaders not known for caring much about the working class is unlikely to do much for anyone but Trump and those Republican leaders.

I sincerely hope I'm wrong. But if I'm right, Republican failure to address core campaign promises may lead to more Democrats winning seats in Congress in the midterms.

Democrats need to do some soul searching about how they lost the working class in rural America in this election. Income inequality is a traditionally Democratic issue and Clinton's (and Bernie Sanders') plan for addressing it apparently didn't register.

It is doubtful that a Trump administration composed of alt-right leaders — like newly appointed white nationalist Stephen Bannon — and the Republican establishment will be able to deliver on all of Trump's signature campaign promises. Already the president-elect and his surrogates are backing away from annihilating the Affordable Care Act and from building that fabled wall.

Meanwhile, major issues that affect all Americans — especially working-class Americans — pose grave jeopardy. Members of Trump's transition team want to dismantle Social Security. A rollback of internationally agreed upon environmental policies will only speed climate change. Cutting taxes will overwhelmingly favor the wealthy and markedly increase the national debt. Gutting Dodd Frank regulations will enrich the very Wall Street banks Trump campaigned against, and risks another disastrous crash. The resulting weakening of the Consumer Financial Protection bureau means we will once again be at the mercy of big banks like Wells Fargo, which recently paid a $100 million fine for opening fake accounts unbeknownst to unsuspecting clients. What happens when this oversight disappears?

To make good on his job-creation promises, Trump will probably begin with infrastructure projects that could, and probably should, attract bipartisan support. I support these. But a Republican Congress will push to privatize these initiatives rather than keep them under public auspices. This will only enrich the wealthy at the expense of the common good.

Our country mouse cousins have spoken. They have the Washington "shakeup" they voted for. I'm listening to my country friends — after all, I grew up in rural Ohio and love and respect those who still live there.

So, yes, we city mice hear you. And I promise to be there for you when the policies of the orange alley cat you voted in (and his voracious friends) try to make lunchmeat of us all.

Because, in the end, Hillary Clinton had it right: We are all in this together.

Aside from the destruction Trump's economic policies could wreak on working-class people, there is the deadly poison already unleashed by his ugly, divisive campaign rhetoric about immigrants, Muslims and other minorities, veterans, the disabled, the national media, and women.

People of faith, indeed all people of goodwill, are being challenged as never before to stand our ground on behalf of God's prime directive: "Love God and love your neighbor as yourself." This "Golden Rule" is found in all religious traditions.

Loving one's neighbor does not include:

Sadly, the validation Trump gave to destructive players in our democracy has yielded an unprecedented surge in hate crimes beginning in 2015, with a significant uptick since the election.

Such appalling developments are overwhelming and can make us feel hopeless.

This is exactly where our faith in God must take center stage.

This is a faith that knows we are called to stand with the marginalized and stand up to injustice and hate, no matter how hopeless things appear.

This faith knows that God stands in the breach with us, and as St. Paul says, "When I am weak, then I am strong." God's strength is made perfect in our weakness — even our political weakness — because we then remember whose power it is that helps us protect the poor and fight nonviolently with and for them.

Our faith calls on us to be "wise as serpents and blameless as doves" (Matthew 10:16).

It remembers God's word in Hannah's hymn: "[I] will guard the footsteps of the faithful, but wickedness shall perish in the darkness. For not by strength do human beings prevail" (1 Samuel 2:9).

It remembers Moses' command to the Israelites: "Don't be afraid! Stand your ground, and you will see what God will do today" (Exodus 14:13).

No beleaguered movement for social justice has ever succeeded without suffering, solidarity and sacrifice. We were probably naive to believe that worldwide movements for tolerance, multiculturalism and social equality would go unchallenged.

Today, we are called to stand our ground and let God's holy, creative Spirit hover over us and do her work within us once again. Then we will know how to come to the aid of suffering peoples in the U.S. and around the world.

Because, in the end, we are all in this together.

Politics | Stand your ground for country mice -- and city mice, too