Adam and Eve banished from the Garden of Eden: Original sin is the sad, mad idea that we’ve separated ourselves from our source and from each other. (Newscom/Godong/Robert Harding)

Bill Maher, the comedian and atheist, taped an interview with my classmate Morrie, the bishop of Paris, Kan., for airing on his HBO show over the holidays. It was pulled. Fortunately, I have a transcript. Here are the highlights, minus the laughs, oohs and ahhs.

Maher welcomes Morrie, who comes out dressed in a smile, a burgundy cashmere sweater, and non-iron khakis from Banana Republic. They sit.

Maher: Well, I must say I didn't expect a bishop to look so dapper. Did you lose your pointy hat on the way here?
Morrie: It wouldn't fit in the overhead compartment. No, your producer told me to prepare for a friendly, informal conversation.

Maher: She told me this show is a kind of "coming out" for you. Your views have created quite a splash in The Hollywood Reporter.
Morrie: The National Catholic Reporter. More like a drop.

Maher: As a matter of fact, Morrie isn't your real name, is it, and Paris, Kan., isn't a diocese. Why the subterfuge?
Morrie: I don't like hot water.

Maher: Why now then?
Morrie: I don't know. I'm 73 years old. I have two years left till retirement. Maybe this will get me early retirement. I don't know. Maybe I'm emboldened by Pope Francis. Something's happening.

Maher: Pope Frank -- I kid the pope -- said we don't need to believe in God to get to heaven. Do you subscribe to that?
Morrie: I'm sure the Holy Father finds that amusing, Bill. Sure, atheists go to heaven. The Catechism of the Catholic Church even says so. As a matter of fact, I think we're all lost in Eden and just don't know it. Way back when a psalmist cried out: "Where on earth can I go that thou art not? If I ascend up into heaven, thou art there. If I make my bed in hell, behold thou art there." Our pain comes from not knowing where we really are, and what we're here for.

Maher: So you believe in a fairy tale god who kills his own son because some stooge ate an apple off his tree, a god who hates gays and loves slavery and oppresses women, and, don't let me forget, condones sex with children. Please, bishop, you're a smart man, don't tell me you believe in this flying crusader in the sky.
Morrie: I won't tell you that. I can't. I don't know anybody who does. Does Andrew Sullivan believe in a God like that? Does Jon Meacham? Bill Moyers? Bob Costas? They're all believers. And they've all been on your show.

Maher: You watch my show?
Morrie: I like your passion for peace and justice.

Maher: Well, thank you. I've always said that if Jesus were in charge of our country we'd probably have health care for everybody.
Morrie: He'd never run for office.

Maher: And what would he think of what his church has done to his teachings? Crusades. Inquisitions. Burning women at the stake. Every war, every atrocity, has been caused by religion. You know that.
Morrie: Fascism, nationalism, communism -- haven't they killed more people in the 20th century than religion has in all of history, and haven't they persecuted people of religion? The genocide in Rwanda wasn't religious but a manifestation of tribalism. So are riots at soccer matches and fights in hockey rinks. Sure, we've done terrible, terrifying things in the name of religion, but, you know, if you look just a little deeper, religion -- and even all those "isms" -- aren't the origin of these evils. It's something rawer, more human, a cancer in the very marrow of our minds.

Maher: Go on.
Morrie: Guilt and fear, Bill -- the kind of guilt that turns into self-hatred and a fear of punishment that erupts into madness. The story of Adam and Eve is not a fairy tale about an apple tree but a metaphor for the way we are. We feel guilty just for being alive, for our hubris, and look for scapegoats, like Cain did Abel, the Egyptians the Israelites, the Pharisees Jesus, nation against nation, and family against family. Psychologists call it projection. We call it sin. Religion is just an excuse, Bill. Guilt makes fear and fear makes sin that makes more guilt that makes more sin. Our fault lies not in the stars but in our fears.

Maher: Well, didn't God kick Adam and Eve out of paradise?
Morrie: That's what they told themselves; it's what we tell ourselves. When Adam and Eve covered themselves and hid from God, God asked them, "Who told you that you were naked?" Original sin is the sad, mad idea that we've separated ourselves from our source and from each other, and one way or another we pass that wretched idea from generation to generation. It's the story of the human race, Bill. We've forgotten who and where we really are. God is not a man on a cloud looking to throw lightning bolts but the always everywhere active love in whom we live and move and have our very being! Religion, at best, teaches us that we are literally in love, and that nothing can separate us from that love. When we realize that, Bill, fear disappears, and we begin to know peace.

Maher: I'm not sure I understand what you just said, bishop, but I'd like to have you back on the show. Will you come?
Morrie: I will. Will you come to Paris, Kan., and see what it's really like?

Maher: But it isn't really there.
Morrie: Neither am I.

A week later the segment was pulled in favor of a last-minute exclusive interview Maher arranged with Rob Ford, the mayor of Toronto.

[Michael Leach is the author of Why Stay Catholic: Unexpected Answers to a Life-Changing Question which Bishop Morrie gave to Bill Maher as a gift, saying, "It's not what you think."]

A version of this story appeared in the Jan 3-16, 2014 print issue under the headline: The Bill Maher interview of Bishop Morrie you'll never see. 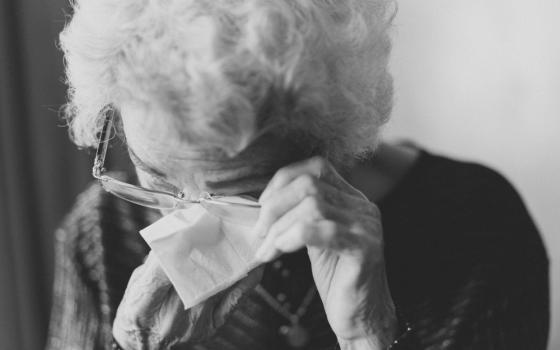