Confession is about the mind-boggling mercy of God 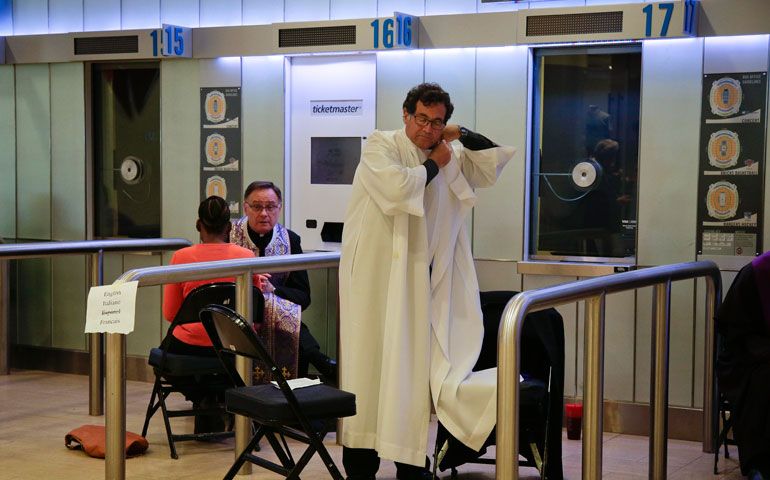 A priest prepares to hear confessions before the start of a Mass to be celebrated by Pope Francis at Madison Square Garden in New York Sept. 25. (Newscom/Polaris)

Sept. 25 was one of those spectacular autumn days in New York. The heat of the summer had faded away, and a brilliant, blue, cloudless sky greeted the world.

At about 1 p.m., I walked out the door of the house I share with nine other Jesuits, and walked up Eighth Avenue to Madison Square Garden. I was asked to hear confessions before the papal Mass, and doing so was one of the most profound graces of my life.

On my way up there, it struck me that the last time I was at the Garden was for Game 5 of the NHL Eastern Conference semifinals in early May -- a game to which my very generous friends Chris and Heather invited me along with another close friend from college.

I had a great time that night. We all ended up screaming at the top of our lungs, with both hands in the air, as Rangers captain Ryan McDonagh's wrist shot beat the Washington Capitals' goalkeeper, Braden Holtby, in overtime.

I knew the papal Mass would be much different from a Ranger playoff game, but also really did not know what I was in for.

After I went through security screening -- this was the first time I had ever been screened by TSA at the Garden -- I found a priest I had never met before who was holding a clipboard. He greeted me, found my name on his sheet, and said, "OK, we're using the ticket area as confessionals. So just find an empty one." I walked over to Window 10, took out my purple stole, and put it on. I adjusted the two folding chairs in my little aisle, and waved over the next person in line.

For the more than four hours that followed, I, along with other priests, heard confessions of many, many people who were there for the Mass. More than one person said through teary eyes that they had not been to confession in more than 30 years, and it felt so good to be back in the sacrament.

It felt great for me, as well. All of those confessions were truly privileged moments for me, just as almost all of the confessions I have heard have been.

My response is always the same: "It is an incredible grace." And I mean it. People are there to confess their sins, for sure. There is something in their lives that they are not happy about, and they want to apologize for it. They want to apologize to God, and to the community.

But more than what they've done wrong, I hear people confessing how hard they are trying to live morally, and their deep desire to express love for the world with more conviction and frequency.

I'm overwhelmed by their honesty and the compassion for the people in their lives. That's grace.

The experience of listening to the level of holiness of all these people -- regular people like you and me -- all walking around this Earth trying to love better, is such a humbling experience and a tremendous privilege.

Good priests do not sit in judgment of people in confession. Good priests sit in awe of the holy desires that people carry in their hearts. Good priests are so humbled to be a conduit of God's mercy, and an aid to people shedding their fear, guilt and shame.

Good confessors try to give people some strategies to see God in a more authentic way, in hopes that whatever advice they give will be something to help guide both the confessor and the penitent.

I don't know if I'm one of those good priests, but the people I meet in confession truly inspire me to be one. I aspire to approach life and those I meet with a similar holiness.

[Jesuit Fr. Dennis Baker is a newly ordained priest residing in New York City, where he is studying school administration at Columbia University.]

Spirituality | Confession is about the mind-boggling mercy of God