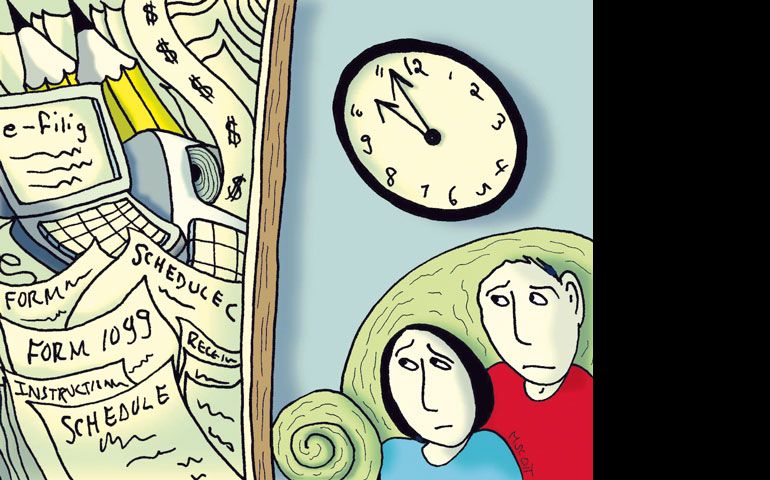 I was in Paris, Kan., for a wedding on a Saturday and slept at my classmate Bishop Morrie's loft over a former meat-packing plant on the other side of the tracks. Morrie had converted the abandoned building into offices and living quarters for the priests, sisters and laypeople who help him run the second-smallest diocese in the U.S. The building still smells of sheep, but those who live there eat together and pray together in community, and it all feels warm as wool and as clean as a sheet on a clothesline.

The wedding was festive. Morrie gave a homily that made everyone fall in love with being loving, and later, without benefit of drink, danced with the bride, the bride's mother, the groom's mother and, most engagingly, the bride's 7-year-old daughter. What really dazed me, though, was the homily he gave on Sunday at the 10 a.m. Mass in the early American cathedral. I had never heard a sermon on paying your taxes before. Here is what I remember Morrie saying.

April 15 is coming up soon. If you haven't done your taxes yet, don't wait to achieve this marvelous opportunity. Money is a symbol of love, and some of your tax dollars will go to feed the hungry, shelter the homeless, and give security to widows and orphans. Sure, most of it won't, but who are we to contend? We have to pay our taxes, whether we like it or not. Isn't it saner to see the gift rather than the cost?

Jesus understood taxes better than anyone ever. Remember how a bunch of Pharisees, those holier-than-thou congressmen of his time, cornered Jesus with the question, "Is it right to pay taxes to Caesar or not?"

Like all politicians, first they buttered him up: "We know you're honest. You don't play favorites. You teach the way of God." Then they gave him the gotcha question: "Does God want people to pay taxes to the emperor? Whose side are you on, God's or the government's?"

Of course, their issue wasn't taxes. It was about tricking Jesus into an ageless, go-nowhere argument and making him look the fool. Jesus was direct: "Show me a coin you use to pay the tax."

One of the Pharisees held out a coin in his palm, with Caesar's face staring right up at him like, well, like the ruler who built the roads and bridges and fed the foodless and led the armies and levied more taxes on the rich than the poor, and, if you didn't pay your taxes, could have you arrested -- that guy. Oh yeah, Caesar used taxes for welfare, too, and even the big tunics of Jesus' time felt they somehow had less because those who had nothing got to lick the pot.

The coin was two-faced, just like the Pharisee himself.

The only kingdom Jesus was interested in was a spiritual one. A denarius bore the image of Caesar, who demanded denarii in return. The Pharisees and everyone else wore the image of God, who asked for nothing but love and compassion for those who had little. That's what Jesus was talking about. He couldn't care less about taxes, one way or another. "Be interested only in the kingdom of God, which is not of this world," he taught, "and all these other things will be added unto you."

He was neither a politician nor a pundit. He voiced no opinions and taught in parables. Can you imagine Jesus on one of today's talk shows?

"Mr. Jesus, you're not on Facebook but you have more than 2 billion followers. That said, do you really think a camel can get through the eye of a needle? Really?"

See Jesus laugh, stand up and walk away. "Come follow me," he says, "and I will give you rest."

Jesus also gave joy. "In this world you shall have tribulation," he said. "But be of good cheer for I have overcome the world!"

A sure way to experience tribulation is to whine about taxes. Why get yourself sick? And, after all, if you're rich and pay a lot of taxes, you're still going to have the most toys on April 16. What's the big deal? If you're affluent enough, you'll still have all you need and a little bit more. And if you're struggling or poor, you may not have to pay taxes at all.

Have you ever heard people argue that Jesus told individuals, not governments, to help the poor? Well, aside from the fact that charity just caresses the edges of human woes, let's just remember, Jesus tells us it's right and just to do both: If we're rich, he asks us to give away some, if not all, of our toys before and after we pay taxes. If we're affluent, we can always share a little more of our "more," can't we? And if we're poor, our widow's mite is worth more than all the amusements in the world.

A sure way to overcome the world is to live for God 24/7, be able to put in an honest day's work for money that provides a healthy and comfortable life for our self and our family, and to pay our taxes without complaint and become a cheerful giver.

Jesus made it clear: "It's easier for a camel to get through the eye of a needle than for someone with too many toys to enter the kingdom of heaven anyway."

At the community dinner that night, Morrie tapped his glass of tomato juice and announced, "You won't believe it. We got the biggest collection this year, and all I did was remind folks to fill out their tax forms!"

[Michael Leach's own Gospel meditations appear in the magazine Give Us This Day, edited by Mary Stommes.]

How should we support those going through life transitions?

The kingdom of heaven comes to our house