Seeing God through the eyes of a wild creature 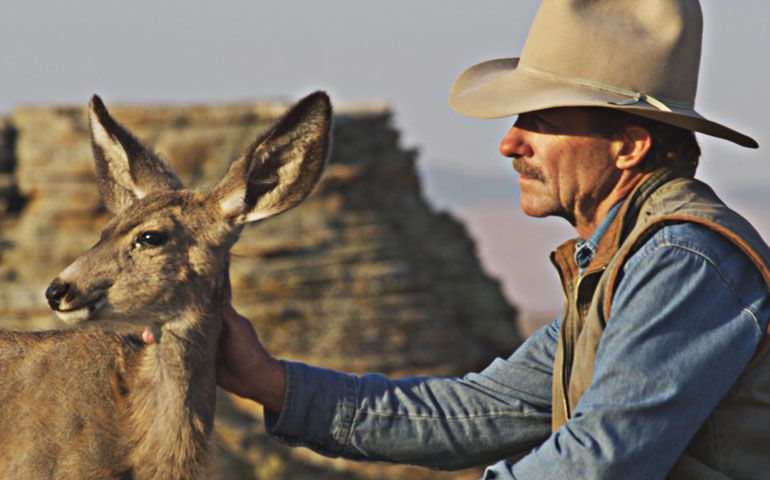 I like to watch nature documentaries on TV. They jump-start my religious imagination with startling images of God's saving side.

I learned to grieve watching a mother leopard mourn the sudden loss of its cub. Seeing a father zebra coax its foal away from its dead mother and back to protection of the herd showed me how hard God begs us to abandon death and isolation in favor of life and community. My prayer life got a makeover when I watched an orphaned white rhino learn to escape disease-carrying insects and scorching sun by taking time to wallow in cooling mud and water, a habit that turns out to be both refreshing and life-saving. Real prayer, I am learning, has a lot to do with wallowing.

"Touching the Wild," a PBS documentary with naturalist Joe Hutto, gave me a new image of God's relentless passion to comfort and challenge us. It documents Hutto's six-year stint with a herd of wild mule deer in Wyoming's mountainous wilderness.

He didn't just observe the deer while there. No, he lived with them, the result of an irresistible urge to "truly see the world through a wild creature's eyes." As he slowly entered into their world, beholding a wild harmony, he started seeing his own with fresh eyes, a kind of converted vision that turned his competitive world upside down.

When he came back to civilization six years later, enriched and changed, he was eager to engage the world with the deepened creativity he received when he let the unruly and uncharted touch his soul.

What happened to Hutto sounds like what happened to Jesus when he was driven "out there" into the wilderness to be tempted and changed while living with wild beasts. While there, he must have rubbed up against God's wilder side, something that turned his religious vision on its head.

Perhaps that was what led him -- compelled him? -- to shake up the religious niceties of his contemporaries by insisting that God was just as present "out there" among the outsiders in the streets as in their staid houses of worship. When we read the Gospel stories closely, we see a side of God that comes with an insistent, wild ferocity that turns on its head everything we take for granted about what's holy and full of grace.

Don't we all have something of Jesus and Joe Hutto in us? Doesn't our faith regularly drive us out into lonely places in the wilderness of our hearts to find new places of grace?

If God helps us out there to navigate successfully past temptation just like Jesus did, don't we also run the risk of having our expertly tamed religious world transformed when we start seeing it through the wilder eyes of grace? The wilder side of God refuses all our attempts at predictability and containment, preferring, instead, to goad us into a faith that harbors an impolite edge and resists being domesticated or turned into a cold, controlling dogmatism.

Hutto spent six years in the wilderness, and Jesus was there for a symbolic 40 days. For our conversion to take root, we need to put in time out there as semipermanent residents rather than occasional sightseers. To adapt Hutto's language, we need move from being near God to being close to God.

Prayer is required if we are to live in those wild places between the merely natural and the naturally graceful. Our prayer takes on a discerning quality as we learn to navigate the often-confusing boundary between what we need to fear and resist and what we need to greet and embrace.

We learn these differences the more time we spend exposed to God's wilder side, being tutored on what to keep close and what we need to abandon in favor of faith's more impolite invitation to let resourceful grace have its way with us. After all, God is always coming to us as fresh possibility for the future -- God's future and our own.

Toward the end of "Touching the Wild," Hutto shows his viewers the well-worn paths mule deer have traveled for hundreds of years, full of confidence that they would once again lead them to food and life. But there comes a time, Hutto insists, that these paths turn into dead ends, and the deer know instinctively that they need abandon past habits and take chance on new paths to possible sustenance. It's a wonderful image of how faith is always on the lookout for more commitment to God's surprises.

When that happens, being "out there" becomes a walk on the wild side with God.

[Joe McHugh is a spiritual director in St. Paul, Minn., and has contributed to Soul Seeing in the past. You can read all of the Soul Seeing columns at NCRonline.org/blogs/soul-seeing.]

Spirituality | Seeing God through the eyes of a wild creature

Take a prayer day: a time to put the world aside

First Sunday of Lent: Teach me your ways of love, compassion