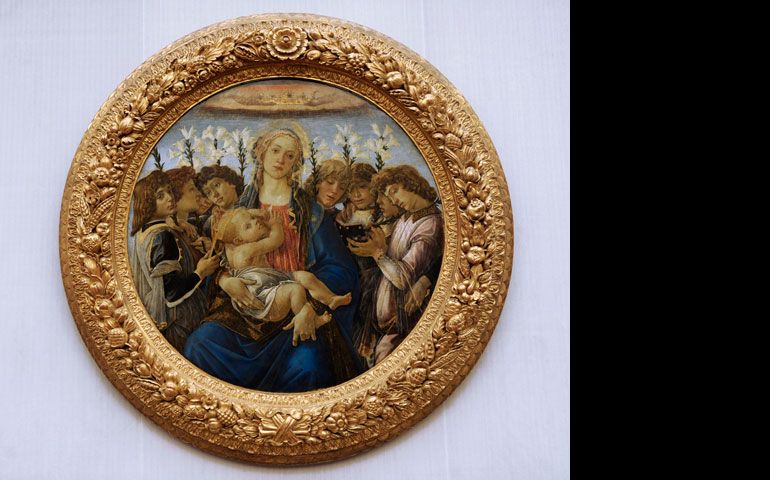 "Madonna with Child and Singing Angels" (1477) by Sandro Botticelli (Newscom/Album/Prisma)
This article appears in the Christmas 2013 feature series. View the full series.

"Does anyone have the foggiest idea what sort of power we so blithely invoke?" -- Annie Dillard on worship, in Teaching a Stone to Talk

When I moved back to North Carolina two years ago, I got a job in the Arboretum, a shopping center in South Charlotte, at the Barnes and Noble Café. They hired me for extra help that December during the holiday season. I liked the work and wound up staying at Barnes and Noble for 10 months until I got the job at the art gallery where I now work.

In retail, "the holiday season" starts pretty much after Halloween. Barnes and Noble has gifts for everyone on your list -- Godiva chocolates, Nook e-readers; the latest bestsellers; calendars for next year, depicting all manner of things from cute kittens to the works of Gustav Klimt.

Shoppers like to take a break before going back out in the cold, and our café was there to oblige, proudly serving Starbucks coffee. Around Christmastime, Starbucks sells seasonal drinks: eggnog lattes, peppermint mochas and Christmas Blend coffee. A lot of people would tell us how much they looked forward to the peppermint mochas at holiday time, for it was a special treat. We didn't stock peppermint syrup year-round.

Barnes and Noble is only closed two days out of the year: Thanksgiving and Christmas. Otherwise, it's open for business at 9 a.m. and it stays open, on weekend nights at least, until almost midnight. Your shift schedule varies from week to week. But my manager always honored my nonnegotiables: I don't work Sunday morning, and I don't miss choir practice on Monday night.

The choir starts practicing our Advent and Christmas music in September. Our choir director, a stellar organist and harpist, studied at Juilliard, and the music we sing isn't easy: Mozart, Handel, Ralph Vaughan Williams.

In the midst of my hectic latte-making days, choir practice -- along with Sunday Mass, of course -- often felt like the only reminder of the deep, music-filled Advents and Christmases I had known in the monastery.

I was a Benedictine for nearly seven years. I went to morning prayer, Mass and evening prayer every day. Starting Dec. 17, until Dec. 23, we sang the O Antiphons during Vespers. These seven antiphons implore the Messiah to come and save us, using messianic titles found in the Book of the Prophet Isaiah. It is unclear how long Christians have prayed them, but they were in use in liturgies in Rome by the eighth century.

I can still sing some of them by heart: "O Wisdom proceeding from the mouth of the Most High, announced by the prophets; come bring us the light of salvation, come, Lord, come to save us."

On Christmas Eve, we would have Christmas Matins, evening prayer that functioned as a vigil for the Mass we would celebrate in the morning. There, Advent ended and Christmas began. At Matins, a small group of us sang an arrangement with words from the prologue of the Gospel of John: "In the beginning was the Word, and the Word was with God, and the Word was God. And we saw his glory ..."

Later during Matins, we would read that Gospel. "All things came to be through him, and without him nothing came to be. What came to be through him was life, and this life was the light of the human race; the light shines in the darkness, and the darkness did not overcome it" (John 1:3-5). Of the four Christmas Masses, in our monastery we only did two: Midnight Mass on Dec. 24, and Mass during the Day on Dec. 25. We did not hold the Vigil Mass, at which is read the Matthew Gospel of the genealogy; or the Mass at Dawn, in which the angels depart, the shepherds make known what they have seen, and "Mary kept all these things, reflecting on them in her heart" (Luke 2:19).

And then Christmas continued into the next year, until the Baptism of the Lord in mid-January. I was at church on Dec. 26, the feast of Stephen, first martyr, on Dec. 27, the feast of John the Evangelist, and on Dec. 28, the feast of the Holy Innocents.

I left the monastery six years ago. In my daily life today (and in the daily life of most Catholic Americans, I would venture to say), the liturgical year is experienced rather choppily. At least in the multitudinous malls and chain stores of this city, the "Christmas season" is over on Christmas Day, though there's a vestige of holiday spirit left until New Year's. Then it's back to work. The peppermint mochas of the holiday season gone for another while. But I still have the music of the choir. And when on Dec. 25 I hear the Prologue to the Gospel of John proclaimed -- with its majestic, glorious summary of the saving Incarnation -- then Christmas washes over me with all of its power.

Spirituality | What Christmas is all about

The fire of your love