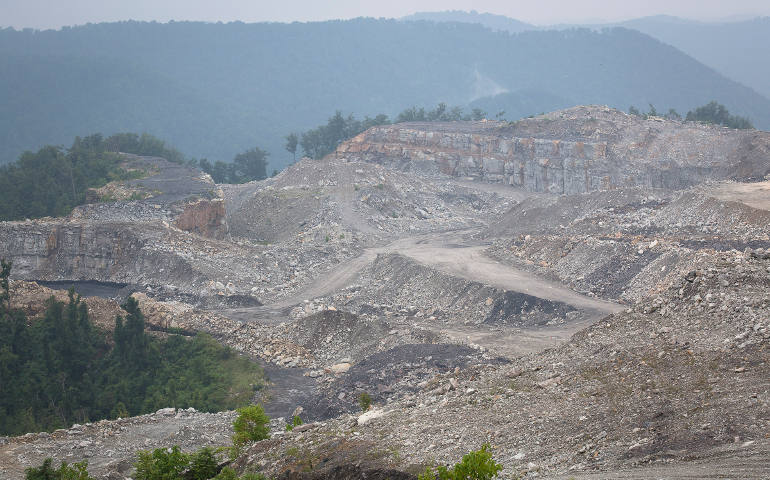 That same question could apply just as easily to the people of the state. Theirs is a land enriched with miles of coal seams but one in the midst of grappling with a changing global energy economy and worldview questioning the efficacy and ethics of burning fossil fuels.

The reality of life without coal has become a pressing issue and is overdue for real discussion, said O’Donnell, executive secretary for the Catholic Conference of West Virginia. While the state’s northern and central regions are more diversified and stable, its southern portion remains primarily reliant, economically and culturally, on its coalfields.

“The curious case of southern West Virginia is a conversation about what’s happening after coal?” O’Donnell said. “Well, you don’t begin it by averting to climate change, you begin by talking about, what’s the reality about the coal industry in southern West Virginia? It’s failing, so we really do have to think about the future.”

In nearby eastern Kentucky, similar realities are unfolding. This is part of the reason Bishop John Stowe, in mid-August, spent his 100th day as head of the Lexington diocese traveling more than 350 miles in a daylong tour of the area’s coalfields. He saw the effects of mountaintop removal, heard the concerns of coal executives and miners, and felt, through the words of a retired miner tethered to his oxygen tank, the pains of black lung from a lifetime in the mines.

Outside the tour, Stowe, a Franciscan, so far has spent the early portion of his time in his new home reading past pastoral letters of Appalachia and studying the region’s rocky history with coal.

“I know that many people depended on its mining for their livelihood here, but that it caused a lot of suffering and a lot of economic injustice in the area. So coal is and remains a controversial topic in this part of the country,” he told NCR.

Against this backdrop, Appalachia’s Catholic communities in June received Pope Francis’ encyclical on the environment and human ecology, “Laudato Si’, on Care for Our Common Home.” While the document stretches more than 40,000 words, 31 of them acutely elucidate reaction there: “We know that technology based on the use of highly polluting fossil fuels --especially coal, but also oil and, to a lesser degree, gas -- needs to be progressively replaced without delay.”

The sentence, a small extract one can dig from the many themes and messages inside Laudato Si’, has served as a banner slogan for environmentalists eager for a cleaner energy mix, and bulletin board material for those who claim the pope -- and eco-advocates alike -- seek to choke economic growth, and with it people’s livelihoods, in pursuit of saving the planet.

The challenge for Catholics in America’s fossil-fuel-heavy regions has been one part reassuring their neighbors that the pope doesn’t aspire to end industries or careers, and one part beginning a dialogue refocusing human endeavor toward serving people and the environment, rather than destroying them.

Perhaps caught more in the middle than anyone is Bishop Michael Bransfield of Wheeling-Charleston, W.Va. His initial comments on the encyclical portrayed him to some as off papal message and more in the coal state of mind.

“Obviously, the dependency on fossil fuels must go down,” Bransfield told NCR in September, “but at the same time our consciousness of the unemployed and the poor must stay current and informed.”

“I’m not criticizing the government for wanting to get rid of fossil fuels, but how much of a price does Appalachia have to pay? … The fact is we’re going to have to pay a higher price than the average person reading that encyclical.”

Paragraph 165 of Laudato Si’ begins, “We know that technology based on the use of highly polluting fossil fuels -- especially coal, but also oil and, to a lesser degree, gas -- needs to be progressively replaced without delay. Until greater progress is made in developing widely accessible sources of renewable energy, it is legitimate to choose the lesser of two evils or to find short-term solutions.”

“I think that paragraph is pretty clear,” said Erin Lothes, a theologian who studies energy ethics at the College of St. Elizabeth in Morristown, N.J.

The theologians and bishops who spoke to NCR came to consensus that the pope was not calling for overnight shifts in energy use, in the U.S. or elsewhere, but recognized a lengthy transition period ahead. What is urgent, though, they said, is the need for accelerated reduction of dependence on the most carbon-generating fuels in lieu of cleaner energy sources.

Francis has placed care of the human person, even those in the mining and drilling sectors, at the heart of the encyclical, said Bishop Paul Etienne of Cheyenne, Wyo., a sparsely populated state that produces nearly 40 percent of U.S. coal (or roughly four times West Virginia or Kentucky), and ranks in the top 10 in oil and natural gas drilling.

“I don’t think he’s wanting to see an entire group of people in particular industries unemployed, that’s certainly not his desire. … But I think he wants to open this dialogue, and he’s calling for new models, I think, of how we drive this economy,” said Etienne, current president of Catholic Rural Life, a national agricultural outreach organization.

Lothes said that the pope has stressed that investments that yield greater short-term financial gain at the expense of people themselves are ultimately bad business for society. “And maintaining the investment in coal is going to prove it is not only bad for the environment, but it is not economically sustainable,” she said.

In Paragraph 165, the sole coal reference of the encyclical, Francis presents the mineral at the bottom of a hierarchy of interim fuel options while renewable technology advances, said Richard Miller, a theology professor at Creighton University in Omaha, Neb., and editor of God, Creation, and Climate Change: A Catholic Response to the Environmental Crisis.

The pope, Miller said, places natural gas at the top and oil in the middle — both generate fewer carbon emissions than coal.

Stowe noted that Francis is “not calling for immediate, overnight solutions that are going to radically displace people — I think there’s a sensitivity to that. And choosing the lesser of two evils is something that we have to do frequently in the moral life when there isn’t a perfect solution readily available.”

At the same time, Dan Finn, the Clemens Professor in Economics and the Liberal Arts at the College of St. Benedict and St. John’s University in Collegeville, Minn., said the argument for jobs doesn’t justify continuing the energy status quo.

“That’s not reason enough to say, ‘OK, then, let’s just stick with what we’re doing here,’ because in fact we never will have a larger role played by renewable energy resources until we make changes to the current uses and current policies,” he said.

Miller said, “The worker cannot be protected at the expense of the human rights of people around the world and young generations.”

Editor's Note: This is Part One of a four-part series on the papal encyclical in coal country. Read Parts Two, Three and Four.