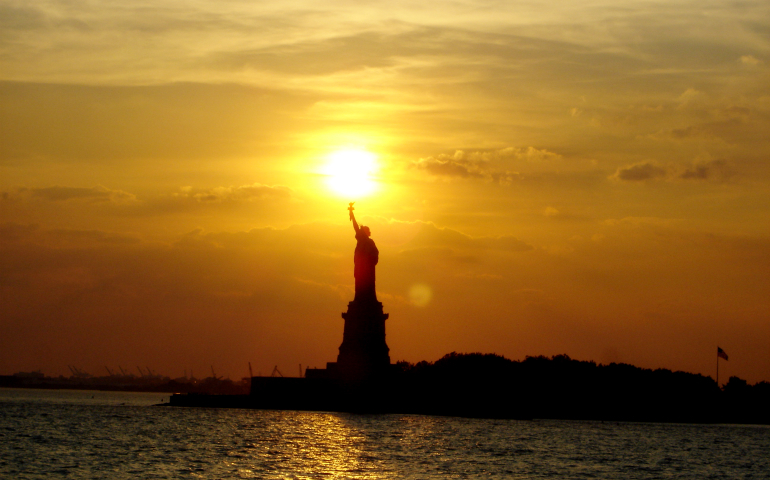 It's Thanksgiving again. But for what?

The measure of pain in the land since this year's presidential election is almost palpable to behold. We are riven, it seems. It's hard to know how to talk now — even to friends — as all of us, at one time, are grieving differently. And for different things.

I myself, a veritable political aficionado, could barely stand to look at the TV after the election, to hear the voice of narcissism, to see the raging face one more time. I felt tears well up every time I tried to imagine how a woman — women in general — must feel to have 30 years of her political experience, international expertise and undying commitment rejected in favor of a misogynist, racist, bigoted, self-confessed sexual predator. And worse, to have received more than 1.72 million more popular votes than your opponent and still lose in the process is enough to crush any amount of spirit. The results of this election weren't stunning; they were life-changing, soul-moving, heartbreaking.

For many, the campaign promises themselves were enough to shatter the very meaning of Americanism. Their grief lies in watching Lady Liberty turn out her light as the United States of America abandons its commitment to be a haven of freedom and justice and care in the world. Refugees and immigrants need not apply now.

The harsh disregard for the homeless, battle-scarred, starving of the world chills the American heart. After all, the message of America's inclusiveness has put down deep roots in us. As a graduate student in communication theory, I did a study long years ago of the major images and themes in U.S. presidential inaugural addresses. Every president up to then, I discovered, had called the young democracy of the United States to be "a beacon on the hill," "a new Zion," a "Good Samaritan," a messianic people whose arms stretched out in comfort and welcome to all the people of the world.

But that has changed now. The pall of uncertainty hangs heavy over the country. The question of national identity has shaken us to our roots. Who are we now, really? What are our ideals as a nation? What kind of national leader do we strive to be in a global world?

According to U.S. News and World Report's new "Best Countries" survey, conducted in partnership with BAV Consulting and the Wharton School of the University of Pennsylvania, the United States is not No. 1. We are No. 4 in the "Overall Best Countries Ranking" after Germany, Canada and Great Britain; and No. 11 in "Citizenship," or "leading by example." In fact, the United States ranks No. 1 in nothing but military power.

Worse, in the face of data like that, the president-elect talks about one thing: choosing America first, letting everyone else take care of themselves, returning to an "every man for himself" philosophy of international life. This, he says, will "make America great again" in the image of an insular, self-protective island, still open to others, but barely. Not so much. And many of the potential immigrants suspect to begin with. So much for the melting pot. So much for the "city on a hill."

The news, in general, is not good. The morale of the country is low. So the question this year is: What is there to be thankful for on Thanksgiving in the United States? What is left to give thanks for in this climate on America's distinguishing national feast day?

The answer is, I believe, simple. We must be thankful for memory.

Not the kind of memory that makes up a person's private, personal, cultural history but the memory of the values and ideals this country has bred into us since its inception. We need to remember again the values we were raised to believe were not only possible for us as Americans, but imperative. The very DNA of our American souls. We must remember now that they are as possible to achieve again in the future as they have perennially been sought for in the past. However difficult the present may seem to be.

The Thanksgiving Prayer I will say this year will cling to memory as the seed and shaper of a renewed vision:

Creator God, we thank you and praise you

for the opportunity to have lived in a country open to the community of nations and their gifts to us rather than espousing a national political goal of living in isolation from them.

for the memory of a United States where difference, it seemed, was finally seen as the lifeblood of our future, rather than a threat to the present;

for a government that strove to embrace the new while keeping the best of the old rather than seek to revive a past long gone;

for a country in which the role of religion was to grow our spirits rather than feed our fears or capture and control our politics.

for a people of many colors and cultures and gifts who enriched one another's understanding of life rather than set out to set one against the other.

for a country that sought to treat both women and men as equals rather than continue to shape a society in which men were to be privileged and women were meant to be preyed upon;

for a country that attempted to help those who could not help themselves rather than abandon the needy for the sake of increasing the profits of the wealthy;

for a nation that sought by reaching out to others, by defending the oppressed and supporting the defenseless to become a real moral leader of the free world rather than exploit the weak and reject the desolate for the sake of national aggrandizement.

Finally, we thank you and praise you

for those who have led us with noble vision and compassionate hearts. We give thanks for their great respect for democracy and deep commitment to the common good rather than to partisan politics. It is to them we owe the ongoing unity of differences in this land. It is in their names and through their spirit that we seek unity again in our now divided country.

From where I stand, it is on those things that the future of this already great nation depends.

Happy Thanksgiving. May the memory of the past great vision of this country give us all the energy and strength it will take to revive that vision again. It is those ideals and that kind of community covenant that dries my own tears.