US election's very essence was indecency 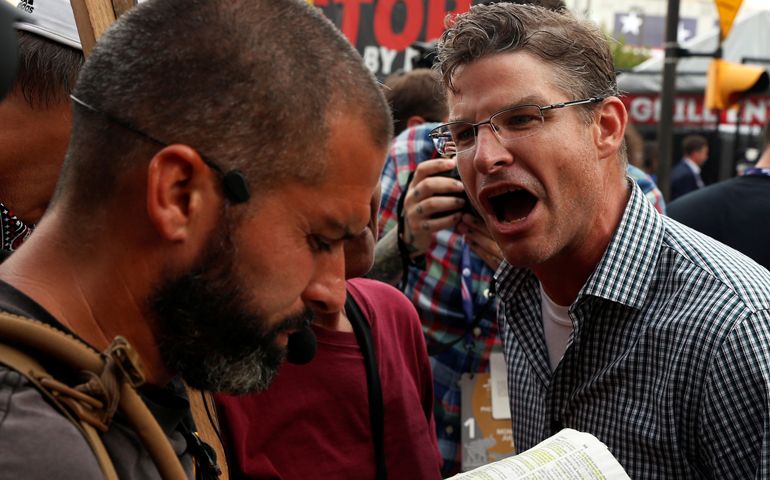 A protester against Donald Trump's candidacy screams at a man reciting passages from Scripture July 18 outside of the Republican National Convention in Cleveland. (CNS/Lucas Jackson, Reuters)
This article appears in the Election 2016 feature series. View the full series.

Some of you noticed that I sat out the presidential election this year. It was only partly intentional. In the first place, "I was for her" and I figured the world had already come to that conclusion themselves without my writing a column to confirm it. I didn't want that kind of bias to seep into a column I like to think strives in most part to be relatively objective analysis.

The second reason I didn't write about so important a subject as a presidential election, however, was far more complex, far more frustrating than the first: This election, it seemed to me, was a tiger that was impossible to ride. Chaos, name-calling, dark accusations and groundless exaggerations claimed the day. What else was there to say about it that would do more than add to the rising tide of frustration and rage? Data, plans, platform and decency had all left the field.

Instead, this election was about decency. But indecency was its very essence.

Its language was indecent. The American public heard not a word about the substance that lay behind the untested promises. In fact, the few times policies became part of the conversation, pundits apologized for the distraction and made sarcastic references to substance, called it "wonky," in fact. (Cue laugh or sneer.)

So now we have a new president but little or no specific awareness of exactly how this president intends to do what she or he said they'll do. No idea whether such things are really doable or not. Very little assurance that what was promised can actually be delivered. Or, indeed, should be delivered.

Its media was indecent. Unlike elections past, no popular news programs sponsored a series of tutorials designed to explain to the American people exactly what was implied by such a series of vague promises.

For instance, as much as we should ask exactly how this country is going to pay for free college education, we haven't. Or, on the other hand, much as we should know how big a border wall would need to be to end illegal immigration — how long, how high, how thick, how patrolled it would be and, certainly, how much would it cost — we haven't had that discussion either.

In fact, there was no program whatsoever that considered whether or not such a wall would really keep anything out. The Chinese did the same thing in the third century B.C. and it failed "bigly" as any tourist who has ever walked its formidable but breached wall knows. Anything we could learn from that?

Nor have we discussed what will happen to the American economy if and when we decide to withdraw from the global system by choosing American protectionism to American outreach.

Its public communication system was indecent. One candidate received more free air time than all the other candidates put together — despite this country's equal time rule. How? Simple: just by being outrageous. The press followed name-calling, serial lying, outrageous behavior, gutter talk, and fact-free exaggerations like a hound dog, tongues hanging out, rationality thrown to the wind. Why? Program ratings, that's why. By pandering to the bloodthirsty appetites of bloodthirsty crowds, the media raised to celebrity status the political porn of what was meant to be cool-headed conversations on national priorities. And, at the same time, lowered the political culture of the nation. Like the bare-knuckled fight crowds of an earlier time, the most bloodied candidate of the pack was allowed to magnetize the crowds, swamp reason with ridicule.

Its definitions of integrity are indecent. One candidate has been pursued for 30 years and, without a single court case, a single indictment, a single piece of data that serious prosecutors would call evidence, is labeled as "crooked," "corrupt," and dishonest. And then, insult of insults, the FBI announced, after millions of early votes had been cast, that there was no "there" there.

The other candidate lied directly into the TV camera — and despite television data to the contrary — lied in the face of his own contrary statements on every major issue but got higher points for integrity. Which begs the questions, "What is integrity?" and "What integrity?"

As a result, the only thing for sure is a discouraging truth: One lie dinned over and over becomes truth; one thousand lies told one at a time are too many to disprove, despite the many "fact-checkers" in pursuit of the truth.

Finally, the real problem may lie in the definition of decency held by the public itself. The prejudicial mistreatment of Hispanics, Muslims and African-Americans corrupts the very character of what it means to be American, let alone the history of our development and creativity. The amount of xenophobia and prejudice unleashed by the tenor of this election will taint the soul of this country for decades to come.

And yet, the physical mistreatment of women has been the worst mistreatment of them all. Immigrants have been accused of terrorism, exploitation and racial dissimilarity — the "they're-not-like-us people." But women have been demeaned, derided, denuded — even in language. Sexual crime has been reduced to "locker room talk." As if raw, inhumane, sexually brutal locker room talk is acceptable.

Most shocking of all? Few cared. The electoral needle did not move. The crime of female sexual assault did not get called corrupt and crooked. No thousands of people crowed in unison, "Lock him up. Lock him up." Worse, few men — fathers and brothers among them — responded in horror at such talk, such actions.

Instead, the hats and the lewd T-shirts and bumper sticks went on selling outside Trump rallies. Nor did he ever say a word to stop them.

From where I stand, the big topic of this election is, indeed, what kind of country do we want to be. My fear is that we have already decided, made it plain, and will be forced to live with it once this week is over.