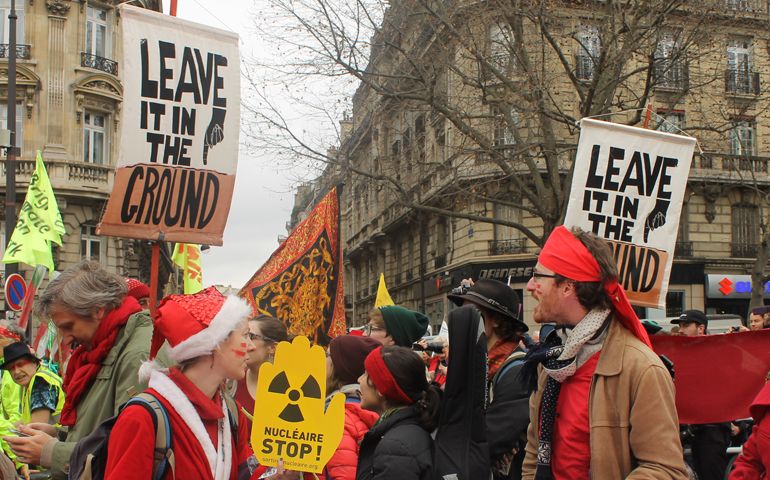 Paris — After years of preparation, it took 13 fervent days of high-level negotiations, one more than scheduled, and on at least two occasions, around-the-clock sessions.

But diplomats to COP21, the United Nations Climate Change Conference, ultimately struck consensus here Dec. 12 on the first global framework for all nations, rich and poor, to collectively address climate change. The Paris Agreement holds nearly 200 countries to reduce greenhouse gas emissions in an effort to avoid the temperature rise scientists have connected with the most dramatic impacts of a changing climate.

In the early moments after its adoption, Catholic groups and development agencies, which played active roles throughout the fortnight proceedings, saw good and bad in the deal: a sig-nal of "the end of the fossil fuel era" but also one that "lacks ambition" in terms of providing necessary protection for the most vulnerable to climate change.

Still, most agreed it was an achievement to coalesce 195 member states to the U.N. around an agreement, one that provides a road map for action through the coming decades.

COP21 was set as a kind of second chance after a similar effort six years ago in Copenhagen, Denmark, failed to procure a binding deal. Toward the Paris summit's end, U.N. Secretary-General Ban Ki-moon described the talks as the "most complicated, most difficult" he has attended.

"We have entered a new era of global cooperation on one of the most complex issues ever to confront humanity," Ban said of the final accord.

The 32-page Paris Agreement establishes the goal of limiting global average temperature rise to "well below" 2 degrees Celsius (3.6 degrees Fahrenheit) compared to pre-industrial levels, and aspires to work toward 1.5 C. That goal is a key victory for many island nations, who marshaled support for the more ambitious target from numerous faith groups, the Holy See and more than 100 nations.

Countries "aim to reach global peaking of greenhouse gas emissions as soon as possible" toward achieving net-zero emissions in the second half of the century.

The Paris Agreement — set for signatures beginning Earth Day 2016 and to go into effect in 2020 — is not a treaty, however. The arrangement is largely a concession to realities in the U.S., where treaties require ratification by the Senate, which, under Republican control, was unlikely to grant ratification for a climate deal.

Instead of legal requirements for specific emissions cuts, the agreement builds from voluntary pledges, known as "intended nationally determined commitments," or INDCs, that most nations made prior to Paris (188 have done so to date).

Countries are legally bound, though, to present progress reports every five years beginning in 2023, and to ratchet up pledges every five years beginning in 2020 — an important element, given analyses of pre-Paris INDCs found they would limit warming to roughly 3 C. Lacking major enforcement mechanisms, the deal relies heavily on global peer pressure for countries to comply.

Other aspects of the agreement:

The lack of a human rights framework in the deal in part led two Catholic development agencies to view it as flawed.

"We were hoping for courage and creativity from leaders to tackle climate change, yet the draft agreement lacks ambition and does not offer an adequate solution to this global emergency which is affecting millions of the most vulnerable people on Earth," Michel Roy, secretary general of Caritas Internationalis, said in a joint statement made with CIDSE, an international development coalition.

Even with human rights relegated to the preamble, Chloe Schwabe, an official observer at the talks representing the Maryknoll Office for Global Concerns, said the overall agreement "sends a signal" to uphold the dignity of indigenous peoples, women, workers and vulnerable populations as it pertains to climate-related projects.

Before the final text's release, Bernd Nilles, CIDSE secretary general and a member of the Vatican delegation to COP21, told NCR that a satisfactory deal would be one that sent "a strong signal that we end the fossil fuel era, and that we go 100-percent renewable, and that everybody in business, in society, understand that big message."

"The 1.5 C target and the goal of net zero emissions enshrines the moral imperative to leave fossil fuels in the ground," he said, though he added that key issues of climate financing and human rights remain unresolved.

Ursuline Sr. Michele Morek, coalition coordinator for UNANIMA International and another official observer, wrote in a blog that the agreement "turned out remarkably well," pointing to the challenge of brokering such a compact among diverse nations. (The deal required unanimous approval.)

"Everyone agrees the document is not perfect, but something really, really big happened: the world now has a framework upon which to build and negotiate," she said.

As diplomats reviewed the final text line by line, an estimated 10,000 people formed their own red lines across Paris in demonstrations for ambitious climate action. The rally, receiving late approval after France barred mass assembly following mid-November terrorist attacks, was designed to give to the people the last word of the U.N. summit.

"I really truthfully believe this is a watershed moment for the environmental movement in terms of the people pushing things," said Ricky Knight of the United Kingdom as he joined others in carrying a long red cloth ribbon that stretched down the Avenue de la Grande Armée.

"We've been around the COP for all this week, and this is the best way to end these two weeks, celebrating that the solutions are here outside the COP and not in there," said Adriana Gonzalez, a youth member of the Sierra Club of Puerto Rico.

Catholics, too, joined in the "red line" rally, one of the multitude of ways they raised their voices in Paris, serving as official observers, panelists, fasters, prayer leaders and demonstrators.

Catholics arrived with 900,000 signatures to contribute to an interfaith petition from more than 1.8 million people seeking climate action. Religious leaders presented the petition to top U.N. and French officials, including President François Hollande.

On the eve of COP21, a pair of papal shoes joined 20,000 others assembled along the Place de la République in a "virtual march" part of the larger Global Climate March.

Before the talks began, Pope Francis warned that the world neared "the limit of a suicide" on the climate issue. At his Angelus a day after the deal's adoption, he said its implementation "will require concerted commitment and generous dedication by all," and urged the work to continue with special attention for the most vulnerable.

The Vatican delegation in Paris based its proposals on 10 principles from "Laudato  Si', on Care for Our Common Home," the encyclical that Francis released in June with special attention toward influencing the talks.

The encyclical's direct impact on COP21 is hard to decipher, though observers to the negotiations reported regular quoting of the pope. In addition, numerous speeches by world leaders at the summit's opening referenced either Francis or Laudato Si'.

Perhaps more than anything, though, it has provided a shared, highly publicized point of reference for Catholics to bring to their leaders and bring themselves together.

Efforts post-Paris expect to center broadly on ensuring governments do what they promised, and specifically on keeping fossil fuels in-ground and holding governments to a "do no harm" approach to the environment.

"There is the gravest need to connect the dots between land, food, water, air. And I think as religious and people following this, that is a voice that we can bring," said Mercy Sr. Aine O'Connor, Mercy Global Action coordinator at the U.N. and an official observer at COP21.

The Global Catholic Climate Movement in the next year plans to shift its focus from the international to the local, with more engagement of policymakers at the national and lower levels and the start-up of green parish and divest/reinvest initiatives.

It also expects to launch a young Catholic climate leaders program, which will hold a workshop on Laudato Si' and climate activism during World Youth Day in Krakow, Poland, in July.

Insua said Paris confirmed the importance of a strong, unified faith voice, and hopes to build on interfaith partnerships like that of the climate petitions.

"It is crucial that politicians understand that it is not only Pope Francis saying nice words from the Vatican, but that their Catholic citizens also are calling for courageous decisions to get rid of fossil fuels," he told NCR.

Nilles of CIDSE said environmental groups arrived in Paris less naive than they had been in Copenhagen, recognizing it as a milestone rather than an end point.

"The Paris agreement is important, but the transformation needs to come straight from us -- from the people and from our business and our economies," he said.

During a mid-COP21 side event, grassroots hero Bill McKibben of 350.org recapped the ongoing fight against fracking as the archetype of people uniting toward a shared goal, even against powerful, often corporate, forces.

"We're going to come out of this COP with a piece of paper that's a little better than the last piece of paper we had," McKibben said, "but if we're going to move forward in a serious way, our job is to keep building the activism that makes progress possible.

"When we organize, we win, so we better organize some more."

Overtime for COP21 may synch deal signing with demonstrations

World | After Paris Agreement, climate activists see next step in mobilizing the people