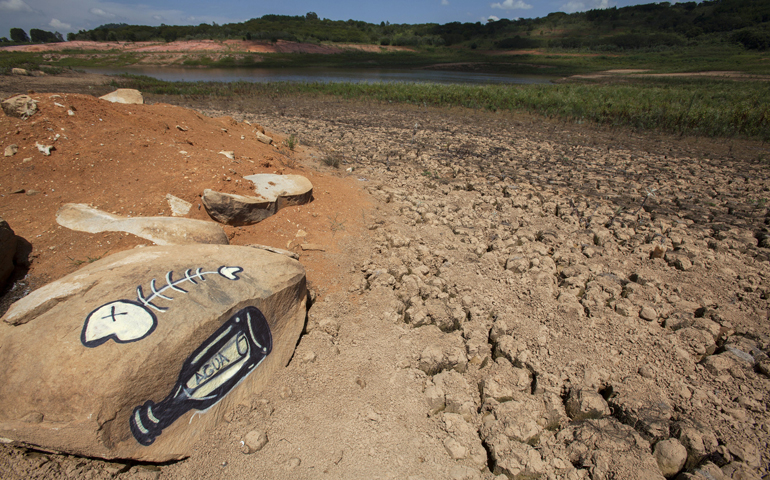 A view of the Jaguari dam in Brazil shows low water levels in early January. The drought in the region is the worst in 80 years, according to reports, as only a third of the usual rainfall occurred during the wet season from December to February. (CNS/EPA/Sebastiao Moreira)

Pope Francis' upcoming encyclical on ecology and climate is expected to send a strong moral message -- one message that could make some readers uncomfortable, some observers say.

"The encyclical will address the issue of inequality in the distribution of resources and topics such as the wasting of food and the irresponsible exploitation of nature and the consequences for people's life and health," Archbishop Pedro Barreto Jimeno of Huancayo, Peru, told Catholic News Service.

"Pope Francis has repeatedly stated that the environment is not only an economic or political issue, but is an anthropological and ethical matter," he said. "How can you have wealth if it comes at the expense of the suffering and death of other people and the deterioration of the environment?"

The encyclical, to be published June 18, is titled Laudato Sii ("Praised Be"), the first words of St. Francis' "Canticle of the Creatures."

Although Barreto was not involved in the drafting of the encyclical, he worked closely with then-Cardinal Jorge Bergoglio in 2007 on a document by the Latin American bishops' council that included an unprecedented section on the environment.

The encyclical is not expected to be a theological treatise or a technical document about environmental issues, but a pastoral call to change the way people use the planet's resources so they are sufficient not only for current needs, but for future generations, observers said.

The document "will emphasize that the option for stewardship of the environment goes hand in hand with the option for the poor," said Carmelite Fr. Eduardo Agosta Scarel, a climate scientist who teaches at the Pontifical Catholic University of Argentina and the National University of La Plata in Buenos Aires.

The pope probably foreshadowed the encyclical during his first public Mass as pope on March 19, 2013, Agosta said. In his homily, he said, "Let us be 'protectors' of creation, protectors of God's plan inscribed in nature, protectors of one another and of the environment."

Although the document will be published in the wake of a seminar on climate change in April at the Vatican, it will not be limited to that issue and will probably focus on the relationship between people and their environment, Barreto said.

"What the pope brings to this debate is the moral dimension," said Anthony Annett, climate change and sustainable development adviser to the Earth Institute at Columbia University and to the nonprofit Religions for Peace. "His unique way of looking at the problem, which is deeply rooted in Catholic social teaching, resonates with people all across the world."

Annett called the timing of the encyclical "extremely significant."

A month after it is published, global representatives will meet at a conference on financing for development in Addis Ababa, Ethiopia.

In September, the pope will address the United Nations at a session that is likely to see the approval of a new set of global development objectives, the Sustainable Development Goals, which include environmental criteria.

And in December, negotiators and world leaders will converge on Paris to finish hammering out a treaty aimed at reducing the emission of greenhouse gases that contribute to global warming.

Some politicians have already questioned the pope's credentials for wading into the issue of climate change, but that is only one of several environmental problems the pope is likely to address, said David Kane, a Maryknoll lay missioner in Joao Pessoa, Brazil, who works with Maryknoll's Faith-Economics-Ecology Program.

The pope has spoken out in the past on the "throwaway culture, both of material goods that we buy and use for a few months and then throw out, and also throwaway people," he said.

Kane hopes the encyclical will help people understand that overusing resources, from forests to fish to water, results in scarcity that can both increase and be exacerbated by climate change. He expects Pope Francis will remind people of the responsibility of caring for God's creation.

"Whether you think climate change is a problem or not, you cannot deny that running out of fish, oil, water and other resources is a really big problem. The solution is a radical change in our concept of what makes a person happy. We need to move away from the idea that the more things we have, the happier we'll be," Kane said.

Barreto expects some controversy once people read the document, because resisting the "throwaway culture" by being satisfied with less means "putting money at the service of people, instead of people serving money."

The encyclical "will have many critics, because they want to continue setting rules of the game in which money takes first place," he said. "We have to be prepared for those kinds of attacks."