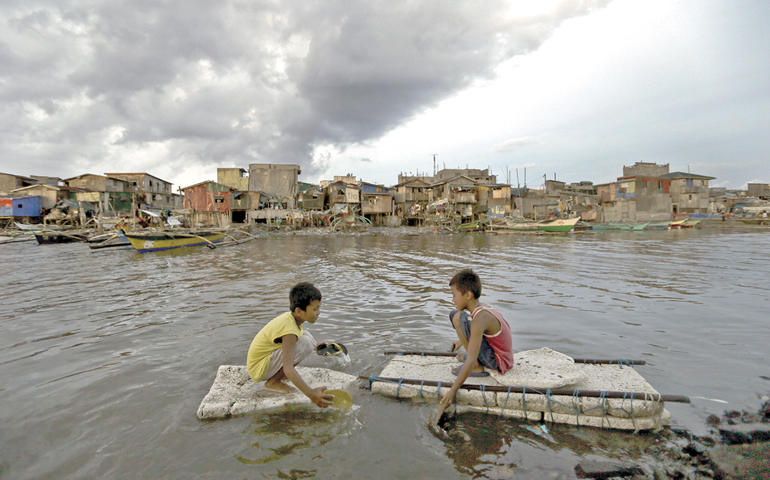 Children paddle in water in Navotas City, Philippines, May 10. (CNS/EPA/Ritchie B. Tongo)

One of the nations most vulnerable to climate change has become one of the first to mobilize in response to Pope Francis' environmental encyclical "Laudato Si', on Care for Our Common Home."

On July 4, Cardinal Luis Tagle of Manila, Philippines, along with more than 1,000 priests, religious and lay leaders, launched a campaign in the archdiocese to collect 1 million signatures on a global petition to be delivered to world leaders gathering in Paris in December.

In addition, the archipelago's bishops have pledged to lead conversations and actions around issues raised in the encyclical and likely to arise at the Paris climate talks.

The petition is part of a campaign began in March by the Global Catholic Climate Movement. Two months later, several members met with the pope, who endorsed their efforts. As of Wednesday, more than 31,000 people had signed the petition.

"This will be huge. When Filipinos commit to mobilize, they really mean it," said Lou Arsenio, coordinator of the Manila archdiocese's ecology ministry, a founding Global Catholic Climate Movement organization. She described the ecological crisis as a top issue for Tagle.

"Pope Francis called each of us to undertake a mission to save the planet, our relationship with God and our human family," Tagle said in a July 10 message to Caritas Internationalis, the Catholic aid organization he heads.

The Philippines, comprising 7,000-plus islands where 80 percent of its 92 million citizens are Catholic, is viewed as particularly susceptible to climate change, ranked by the 2014 World Risk Report the second-most vulnerable country to a disaster resulting from an extreme weather event.

A 2013 World Bank analysis projected increases in sea level rise and ocean temperatures will lead to intensified storm surges, particularly in the southern islands, and threaten farmlands and fisheries.

In its petition, the Global Catholic Climate Movement has called for negotiators at the United Nations climate talks in Paris to take steps "to drastically cut carbon emissions to keep the global temperature rise below the dangerous 1.5°C threshold" -- a more ambitious mark than the U.N.'s 2 degrees Celsius target -- "and to aid the world's poorest in coping with climate change impacts."

The U.N. climate change conference, formally known as the 21st Conference of the Parties, will run Nov. 30-Dec. 11 in Paris. There, world leaders are expected to finalize a universal, legally binding agreement among nations to combat climate change. In Ethiopia in mid-July, countries agreed on a financial structure to support the U.N. post-2015 sustainable development goals (among them, ending poverty and combatting climate change), which could be adopted in September. The Addis Ababa Action Agenda also calls on developed countries to recommit to providing $100 billion annually to fund developing countries' climate efforts.

The pope's encyclical, said Philippine Archbishop Socrates Villegas of Lingayen Dagupan, "anticipates the Paris Conference" and urges Christians to concern themselves with the concerns emerging there -- issues at the heart of social justice.

"It is a Christian obligation to be concerned with ecology and with climate change as a direct consequence of the moral concept of STEWARDSHIP and a concomitant of Christian charity," Villegas said in a statement in his role as president of the Catholic Bishops' Conference of the Philippines.

Villegas added that "all persons of goodwill must train their eyes on Paris" and collectively make its issues "the issues and concerns of all, for in truth, caring about climate change and its deleterious and devastating effects on all ... is our way of attending to the needs of the least of our brothers and sisters."

"It is how, today, we must wash each others' feet," he said.

The Catholic Climate Petition campaign returns the Global Catholic Climate Movement, now more than 140 organizations, to the site of its January formation when the pope traveled to the Philippines. As part of that trip, Francis stopped in Tacloban, one of the hardest-hit areas in November 2013 by super Typhoon Haiyan.

One of the most powerful storms ever recorded, Haiyan killed more than 6,000 people and affected upward of 16 million. Arsenio said that the number of environmental refugees and homeless have grown due to the near-constant storms.

The effort in the island nation is Global Catholic Climate Movement's first coordinated push involving the church's hierarchical structure rather than the network's grassroots initiatives. Christina Leaño, global campaigns coordinator, said the organization didn't so much target the Philippines for the campaign launch but its partners there "were poised and ready to take this kind of action."

"We hope the example set in the Philippines will have a ripple effect across the global church community," she told NCR.

So far, the Global Catholic Climate Movement has sent materials to 75 parishes in the Manila archdiocese to collect signatures at Sunday Masses, and plans to spread the campaign to the regions of Luzon, Visayas and Mindanao.

The campaign also asks people to seek ways to reduce their carbon footprint, fast from meat on Fridays, and pray for an ecological conversion of heart. The campaign peaks during the Season of Creation, a celebration proposed in 2003 by the Philippine bishops that runs Sept. 1 through Oct. 4, the feast of St. Francis of Assisi.

At its biannual plenary session, the Philippine bishops' conference heard a presentation on the campaign, signed the petition and also considered establishing a climate change desk.

Villegas said the conference, which is reprinting the encyclical in full in its monthly paper, is committed to organizing climate-focused symposia to educate on and discuss the issues. He also encouraged "more direct and immediate action" in parishes and basic ecclesial communities to discern how local realities -- such as mining, incineration and landfills -- disrupt the ecosystem.

"Here, advocacy of Church communities in behalf of the common good should influence policy makers and translate itself into community action as well," Villegas said.

The Manila ecology ministry has promoted such efforts, Arsenio said, including protecting Manila Bay from further development. Other programs have addressed zero waste management and urban organic farming in parishes.

Similarly, Tagle encouraged Caritas organizations to work collectively to develop "bite-size initiatives" to enable individuals to make lifestyle changes in their personal conversion, "to replace consumption with a sense of sacrifice, greed with generosity, and wastefulness with a spirit of sharing."

"This requires a process of universal communication and listening in truth, a global examination of conscience, a global recognition of failures and guilt and a global resolve to right the harm already done," Tagle said.

A version of this story appeared in the July 31-Aug 13, 2015 print issue under the headline: Philippine church takes lead on encyclical.