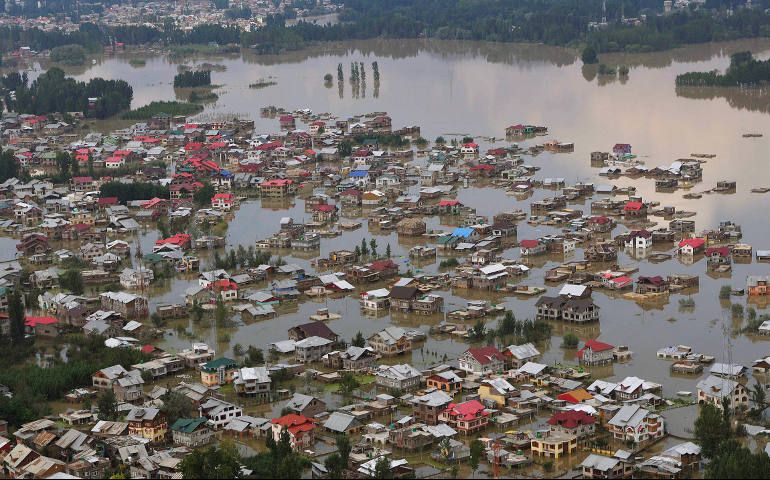 This aerial view taken Sept. 10 shows houses submerged by floodwater in Srinagar, India, located in the Kashmir Valley in the foothills of the Himalayas. (CNS photo/EPA)

Srinagar, INDIA — Christians in the flood-affected Srinagar district in the Kashmir region of South Asia say they will celebrate a simple Christmas this year as their church has yet to reopen after a devastating flood in September killed more than 450 people and affected millions more.

The 128-year-old Holy Family Catholic Church, which serves 50 Catholic families in the district, remains damp after flooding inundated it on Sept. 6.

Tens of thousands of people were left stranded that month when floods and landslides triggered by heavy monsoon rains devastated parts of Indian-administered Kashmir and Pakistan’s neighboring Punjab province.

“We are not celebrating Christmas this year,” said Fr. Mathew Thomas, the local parish priest. “There will be simple prayers held in a room adjacent to the Church, which has yet to be reopened. It needs a lot of restoration.”

The priest added that his parishioners have little motivation to be festive this year, and the region still has a pressing need for support from the government, which he says has yet to send a representative to visit the flood-affected areas.

“I have been discharged from my duties here after decades of service. This is unfortunate because for the first time in my life the Christmas celebrations will not be held here,” said Rashid Ahmad of Srinagar, who has worked as a sweeper in the church for more than 30 years.

Thomas said most of the Catholic families lost their homes in the flooding and relocated to distant towns.

Maryam Shammi, a parishioner whose home was damaged in the flooding, said she and her family will spend this Christmas offering simple prayers for those in need instead of celebrating with friends.

“We used to invite our Muslim friends for Christmas lunch, but this year no such celebrations will occur,” she said.

In the days after the flood, the Catholic Bishops' Conference of India appealed to Catholics to mobilize funds and materials to augment church relief work in the area. The bishops' Sept. 10 appeal expressed "sympathy and solidarity with those thousands of people who lost their homes, shelters and other establishments due to the unprecedented deluge," the worst in 60 years.

In the appeal to the bishops and other leaders of the church, the conference president, Cardinal Baselios Thottunkal, exhorted "the community of faithful, institutions and people of good will to contribute generously to rebuild the lives of the people."

The floodwater left many people marooned, even stifling relief efforts, such as those of Caritas India (the social action wing of the Indian church), as security forces in Srinagar, the worst hit area, had to turn away additional relief workers, viewing them as a liability at that early stage.

"It is total chaos there (in Srinagar). We could not enter the city," Prakash Singh, a Caritas India worker who had to return to Delhi Sept. 9, told CNS in mid-September.

The parliamentary committee report also instructed the federal government “not shrug off its responsibility” in rebuilding flood-hit areas and provide “requisite financial assistance.”

Catholic News Service and Agence France-Presse contributed to this reporting.

World | Post-flood Christmas in Kashmir to be a somber affair