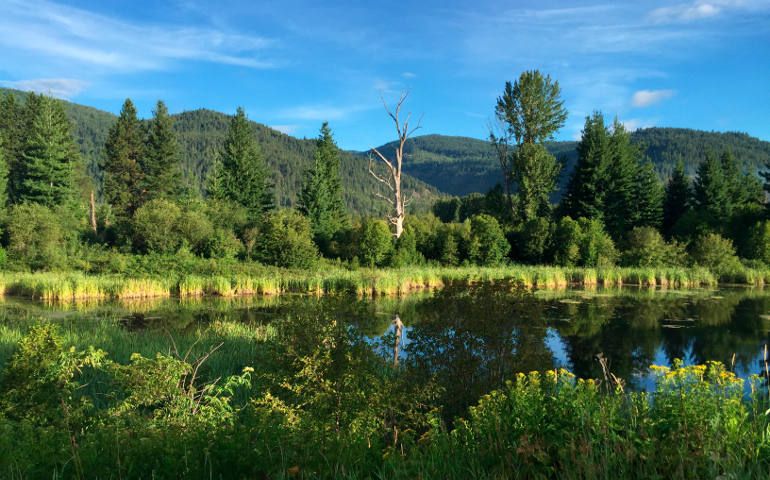 A pond and mountains are seen north of Sandpoint, Idaho, July 11. (CNS photo/Cindy Wooden)
This article appears in the Francis: The Environment Encyclical feature series. View the full series.

Christians across the globe Thursday joined in celebrating the World Day of Prayer for the Care of Creation, but for many the day only marks the beginning of a longer contemplation on the planet the pope regularly refers to as our common home.

The Season of Creation is a month-long prayerful observation of the state of the world, its beauty and the ecological crises that threaten it and all its inhabitants. It runs from Sept. 1, the World Day of Prayer for Creation, through Oct. 4, the feast day of St. Francis of Assisi.

For many Catholics, the day of prayer for creation landed on their radar for the first time last year after Pope Francis officially placed it on the Catholic liturgical calendar. Because of the timing -- Francis instituted the annual prayer day just three weeks before Sept. 1 -- many Catholic groups scrambled to piece together small celebrations with an eye toward larger, more coordinated events this year.

At the Vatican Thursday, Francis helped kick off the Season of Creation by celebrating the World Day of Prayer for Creation with a message that urged Catholics to view care for creation among the corporal and spiritual works of mercy.

The Season of Creation comes as the planet continues its own season of sizzling temperatures.

A Christian tradition of creation care

While 2016 marks the first year of concerted Catholic participation in the Season of Creation, other Christian denominations have recognized it for decades.

A common origin point is 1989, when Ecumenical Patriarch Dimitrios I proclaimed Sept. 1 as a day of prayer for creation in the Orthodox church. From there, faith communities, often at the parish and grassroots levels, began extending the celebration beyond a day throughout the month and until the Assisi feast.

One of the earliest organized celebrations of the season occurred in 2000 at a Lutheran church in Adelaide, South Australia. Three years later, the Catholic bishops of the Philippines issued a pastoral statement creating a day and season for creation, with different dioceses then adding them to their calendars in subsequent years. In 2007 the Third European Ecumenical Assembly adopted it, with the World Council of Churches following suit the next year.

It’s been the passion at the local level that has grown the Season of Creation into something bigger, said Episcopal Rev. Fletcher Harper, executive director of GreenFaith, an interfaith environmental coalition. That the pope, ecumenical patriarch and the archbishop of Canterbury now all recognize it “represents an affirmation of the really good work that people all over the world, that Christians all over the world have been doing,” he told NCR.

For many, the day and season have come to symbolize not only collective awareness of the responsibility to properly tend to the earth, but also a gathering point for all Christians and faiths.

“I can’t think of many themes and specific campaigns that bring Christians together at such scale as this one,” said Tomas Insua, co-founder and global coordinator of the Global Catholic Climate Movement, who added that this year’s efforts mark a first in terms of global coordination around the season.

“As we are [the pope’s] official service of prayer we couldn't miss this project,” said Jesuit Fr. Frédéric Fornos, international director of the Pope’s Worldwide Prayer Network (formerly called the Apostleship of Prayer).

Fornos said the pope encourages all the Catholic church to be engaged in the day of prayer and the spiritual and lifestyle transformations he has called for in his encyclical “Laudato Si’, on Care for Our Common Home.”

“He gave us the direction, and then we commit ourselves,” Fornos told NCR in an email.

During a private audience Thursday morning, Fornos said Francis was aware of the ecumenical initiatives planned around the World Day of Prayer.

Other sponsors of the Season of Creation include the World Council of Churches, GreenFaith, the ACT Alliance and the Anglican Communion Environmental Network.

Events around the Season of Creation began Thursday morning with an ecumenical online prayer service. Almost 200 additional prayer services on six continents have been planned, according to the Global Catholic Climate Movement. A map of the various events is on its website and the Season of Creation website. Insua told NCR roughly half of the celebrations are ecumenical.

Prayer is essential to the season, said Fornos.

“[C]hanging our lifestyle is not enough, because change requires a deep conversion. It is the prayer, closeness to Jesus, at his word, which can transform our hearts and our lives and help us to live everyday with a simple way and solidarity style,” he told NCR.

Along with the pope’s video, people can pray with Francis though the Pope’s Worldwide Prayer Network by using its Click To Pray app. The daily prayer for Thursday read in part, “Father of All Creation, on this World Day of Prayer for the Care of Creation, I am thankful for the beauty of the world that you have created for all your children. Help me to live each day aware of my vocation as a steward of your creation and work with others for the care of our common home.”

In addition to prayer, many have used the Season of Creation as occasion to live out their litanies.

On Thursday morning the English charity Christian Aid announced that more than 3,500 churches in the United Kingdom have already or plan to substitute fossil fuels for renewable energy as an electricity source, including 2,000 parishes from 16 Catholic dioceses.

Other plans under way for the Season of Creation include:

Having an official date for creation care on the Catholic liturgical calendar is “massively significant” in terms of making it concrete in their daily lives and communities,” Insua said.

“Having this happen every year will be a good way of not letting Laudato Si’ fade away,” he said.

Another way to breathe life into the encyclical would be formally adding a season for creation in the liturgical year, according to one Australian priest.

Columban Fr. Charles Rue has proposed doing just that, viewing it as “one way to structurally help implement the vision of Pope Francis given in his encyclical Laudato Si’,” he wrote in a proposal paper that has circulated among faith-based environmental circles. A fellow Columban, Fr. Sean McDonagh, has made a similar endorsement of inserting creation care deeper into the spiritual and liturgical lives of Catholics.

Rue added that a new liturgical season focused on creation “would help believers face the 21st century ecological challenge” in a way that recognizes its magnitude.

“Church communities would be in a better position to dialogue with people of other churches and faiths, scientists and people of good will about earth as our common home, leading to new commitments as congregations and individuals,” he said.

Insua said the development of a liturgical season of creation would be a big step toward embedding Laudato Si’ into the mindset and lives of Catholics. For now, Harper of GreenFaith said seeing the day of prayer eventually raise to the significance of other notable days within the religious calendar would be a major step forward in ingraining environmental concern with faith.

“What I’d love to see is the day of prayer for creation assume some of that dignity and the ability to provoke the kind of introspection and change in life,” he said.

Parishes around the globe work to implement pope's eco-encyclical

World | Season of Creation marks month of eco-contemplation for Christians