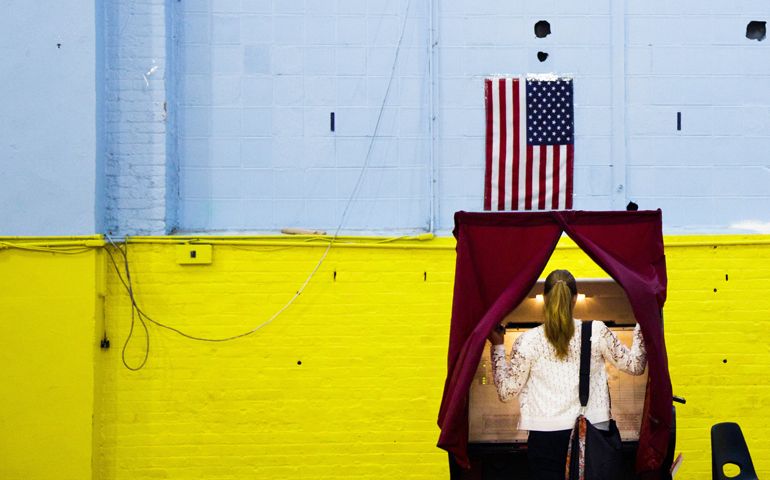 "What questions do you want to wrestle with before the election?"

Over the past week, I've facilitated three conversations about discipleship and the presidential election with college campus ministry students, a regional community of Catholic businesswomen and men, and a parish-based young adult group.

The best part of all these meetings was the probing questions about faith-filled political engagement that the participants raised. We didn't try to answer all the questions in the moment; instead, the idea was to crowdsource a sort of examination of conscience that could guide our own reflections and conversations in the days leading up to Nov. 8.

This exercise was inspired by the U.S. bishops' document on political responsibility, Forming Consciences for Faithful Citizenship, which comes out every presidential election cycle. Voting and other decisions require "prayerful reflection" in order to "discern the will of God," the bishops write. I have not spent as much time praying and reflecting around this election as I have shouting, complaining, and eye-rolling. So, borrowing in part from the three groups I met, here are some questions I'd like to wrestle with over the next two weeks.

When I click on an article about a candidate I don't like, is it to learn something or to hate-read?

Which candidate do I think would be better for unborn children, immigrants and refugees, racial and ethnic and religious minorities, prisoners on death row, the unemployed and the underpaid, the homeless, the hungry, parents struggling to provide for their families here at home and around the world, those living in war zones, and others on the margins? What do I do if no candidate gets all of it right?

Are my expectations of a president realistic? Or do I think of our president-to-be as a sort of supreme monarch? Do I put too much hope in political leaders? Too little hope?

Have I prayed enough for the candidates and for those who will vote? Have I consciously invited the Holy Spirit into my deliberations?

Have I had a meaningful conversation with someone who supports a candidate I'd never dream of supporting? If so, what I did I learn? If not, why not?

Have I spent enough energy researching issues that have a disproportionate impact on those who are poor and vulnerable, or have I been too fixated on the horse race?

Have I invested enough time learning about state and local races and ballot initiatives?

When I look at the U.S. bishops' ten public policy goals, which ones resonate most with me? Which ones challenge me?

How would I rank the many threats to humanity in order of importance? What does this ordering say about me?

Have I attempted to squish the Catholic church's social and moral teachings into the political party I gravitate toward?

If I truly believe what author Mark Shea says -- that the thing my vote in a national election changes is me and not the outcome of the election -- does that affect my thinking about who I might vote for?

Is a third-party or write-in vote or intentional abstention abnegating my responsibility as a citizen? Would deciding to do one of these three things reflect my white, male, upper-middle class privilege, knowing that my own life probably won't change much based on the outcome of the presidential election? Have I thought about people who have much more to lose or much more to gain when considering how I might vote?

When I have been tempted to just disengage from the political process, and how have I responded to that temptation?

Do I blame others or "the system" for the vitriol of this election season? Have I played a role in perpetuating a politics of anger and suspicion? Have I done anything to build up a politics of love? How are racism, sexism, ageism, ableism, and other -isms at work in my heart?

If the candidates aren't talking much about issues that are important to me, what can I do about that? How can I engage constructively in the political process after the election has come and gone?

Ten years from now, when I tell my now 15-month-old daughter about this election and my participation in it, what will my story be?

Lead the way toward peace in the world