Should the Boston Marathon bomber get the death penalty? A Catholic's response 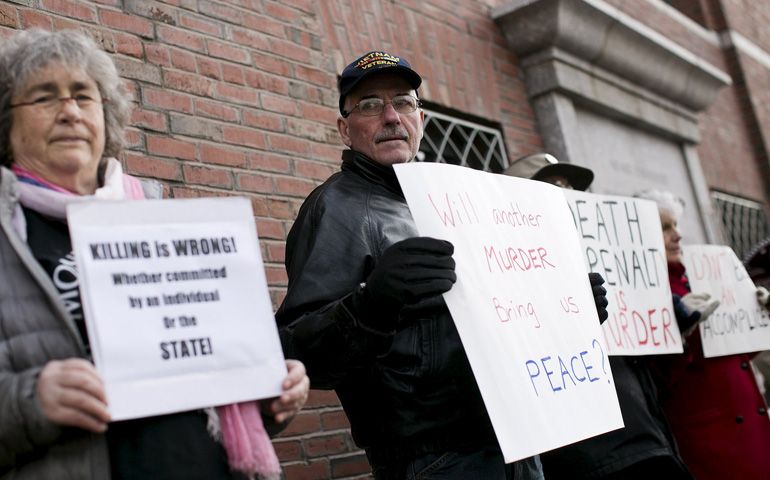 It's finally spring in Boston. Every Bostonian seems a bit more cheerful walking down the street, basking in the warmth of that near-foreign radiating orb in the sky. These are exciting times. Every area college is preparing for commencement. Students are trying to balance their end-of-the-year workload with what seems like a moral imperative to go outside and simply do nothing. And on Monday, we celebrated Patriots' Day and the second Boston Marathon since 2013's terrorist attack.

Dzhokhar Tsarnaev, the surviving of two brothers arrested after the massive manhunt that followed the attack, is in the process of being sentenced after he was found guilty last week on all 30 counts against him. Though the 2013 marathon bombing was a few months before my arrival in Boston, I have seen the traumatic mark the event left on the city in its wake. After Tsarnaev's trial, the question on every Bostonian's mind is: "Do you think he should get the death penalty?"

I was apprehensive about writing on the question of the death penalty because many have written about it, me included. The arguments feel exhausted. Nevertheless, the conversation is very much alive, and it's as polarized as any controversial social issue.

The survivors of the bombing and their families, like the rest of the country, are split on the issue. The parents of 8-year-old victim Martin Richard published a letter in The Boston Globe, urging the prosecutor not to pursue the death penalty in Tsarnaev's case. Others have expressed the opposite sentiment, saying his death is the only path to closure. In a letter to the editor, a local resident publicly shamed the Globe, accusing its editors of politicizing the Richard family's suffering to support a pro-life agenda regarding the death penalty. So while the question is debated on a national scale, it is one that hits particularly close to home this spring for Bostonians. Thus, it seems pertinent to reiterate the position to which I feel called as a faithful Catholic.

Since Tsarnaev's arraignment, I have frequently thought back to the Catholic spiritual writer Henri Nouwen. Last year, a dear friend introduced me to Nouwen's classic reflection The Return of the Prodigal Son. It was, frankly, one of the most formative books I have read. Nouwen describes a journey of self-discovery in which he finds himself relating in different ways to the three main characters from the parable found in Luke 15:11-32 -- the younger son, the older son, and the father.

For my own purposes, I am interested in the difference Nouwen points out between the response of the older son and the response of the father to the younger son's return. When the younger son arrives, his father runs out to embrace him before the son has the chance to apologize for his offence. When the diligent, hard-working, loyal older brother hears the celebration of his younger brother's return, he becomes upset. He goes to his father and points out what he sees as an injustice. He seeks an explanation for the unfair treatment from his father.

The key to understanding how the parable relates to Tsarnaev's sentencing is in how perspective makes a difference for interpreting the parable. If the prosecution's strategy were a perspective, it would be that of the older son. They look angrily at Tsarnaev, whose actions embody the worst qualities of the younger son.

But they see Tsarnaev as worse yet than the younger son. Where the younger son repented, Tsarnaev shows no sign of remorse. He was given the chance to benefit from the opportunities of society, and he responded with a complete disregard for human dignity. They expect of Tsarnaev at least regret, like the younger son showed when he saw the error of his ways and returned to his father's farm to repent. And since Tsarnaev has shown no sign of repentance, the prosecution has decided Tsarnaev does not deserve the father's love. He deserves the furthest thing from it. He deserves to die.

The point of the parable, however, is in the importance of father's perspective. No son is beloved to the father because of some action on the part of the son, including repentance. His love does not depend on the son's response. It would be a mistake to think that either son, older or younger, earns the father's love. This realization gets to the crux of the parable: the harsh reality that the older brother is no more deserving than the younger brother in the eyes of the father. This is the challenge to all of us "older brothers" who look at "younger brothers" with judgment. The reality of the father's love is radically unfair. The love of the father, the love of God, is unconditional and offered always and everywhere, as much to Tsarnaev as to his victims.

The Catholic tradition understands this radical love to be the root of all human dignity, including in the case of Tsarnaev, who himself disregarded that human dignity on Marathon Monday in 2013. This tenet of the Catholic faith is at the root of every pro-life position. It is why we have no place disregarding even Tsarnaev's human dignity by sentencing him to death.

[Zachary R. Dehm is currently working toward his Master of Theological Studies at the Boston College School of Theology and Ministry.]

People | Should the Boston Marathon bomber get the death penalty? A Catholic's response

Capital punishment is in decline

Executions down globally, but up in U.S., says Amnesty International