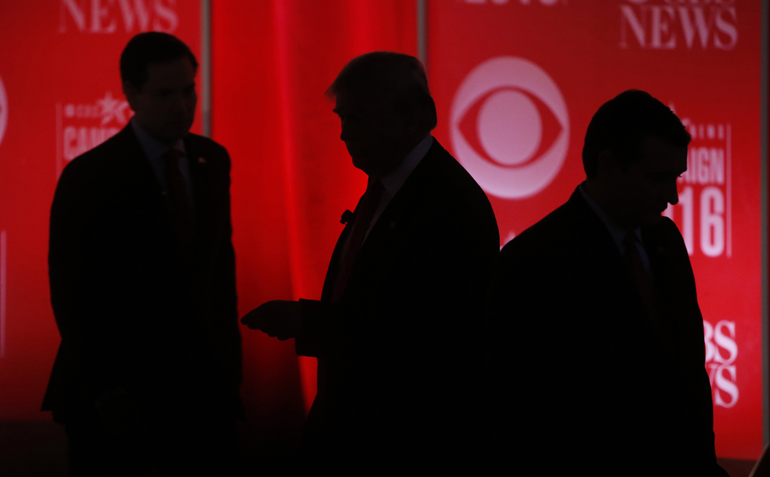 My friend Tom was a senior at Harvard in early 2008. Lent was coming, and so he started thinking about what he could give up.

The year before, Tom and some friends had given up eating lunch. Their dining plan had a bag lunch option, so they'd pick up bags each day and drop them off at a homeless shelter nearby.

After such an ascetical fast in 2007, Tom struggled to think of a worthy follow-up. Mardi Gras arrived, and still he had nothing. Fat Tuesday also happened to be Super Tuesday in that year's presidential primary election season. Twenty-four states held elections or caucuses that day, the most on any single day in American history. This was extremely exciting to Tom because he was a politics junkie and the races were hotly contested: Barack Obama vs. Hillary Clinton on one side and John McCain vs. Mitt Romney on the other. As he watched the returns come in that night, with Lent just a few hours off, he had a flash of spiritual inspiration.

"It struck me that the thing I couldn't stop thinking about and had an unhealthy obsession with was politics. It was like an addiction," Tom remembers. "I was constantly checking for the latest polls to see if the numbers had shifted. It was reflexive and didn't involve any thought. Politics had become a false god for me."

So Tom gave up politics for Lent.

"It was a difficult 40 days," Tom says. "Any time someone started talking about the election, I would say, 'Excuse me, but I have to leave,' and walk out of the room. I had no idea what was going on throughout the most exciting primary in decades."

Tom didn't fast from politics because his interest was negative in itself, but because his relationship to politics was out of whack. He was consumed with the wrong things. "That Lent sort of reframed my view of politics. Since I stepped back from the horse-race side of things, I was able to remember why I cared about politics in the first place," he says. "Rather than obsessing with numbers or who did well in a particular debate, I cared more about the issues."

This year, Lent is in the middle of a presidential election season once again. Tom didn't give up politics this year, but he jokes that maybe he should have. (He's compulsively clicking over to fivethirtyeight.com every day. Old habits die hard.) But I don't think going cold turkey is the only worthwhile approach. I really like the way Tom used Lent in 2008 to reset his relationship with politics. How might we use the rest of Lent to do something similar?

Here are a few ideas connected to the traditional Lenten practices of prayer, fasting, and almsgiving.

I've spent a lot of time talking about, listening to, and maybe even cursing at presidential candidates this year. I've spent precisely zero time praying for them. I can't imagine the stress and scrutiny they face every day; they're certainly in need of prayer. Maybe before I read an article about a particular candidate, I can take 10 seconds to pray for him or her. And perhaps that practice will help me grow more charitable toward all the candidates, including those I really can't stand. The negativity in politics begins with me.

Inspired by Tom's 2008 motivations, I think I'll try to fast from the horse-race side of the election. No more poring over poll data or reading gossipy articles. They can cloud my vision. "If I had been following that election so obsessively, that probably would've dominated my conversations a lot more," Tom says -- and Tom loves nothing more than having one-on-one conversations. "The fast probably allowed me to have more meaningful, deeper conversations with people about ourselves and the things that mattered to us instead of something like, 'Can you believe Hillary said that?'"

Politics at their best can be an integral element of the life of discipleship. Coming together to solve problems and work for the common good is a beautiful human activity, a chance to cooperate with God to build a world that is more just. What prevents us from seeing politics that way? Watching negative ads? Searching out ridiculous Donald Trump quotes that some part inside of us secretly finds entertaining? Whatever that destructive part of engaging in politics might be for each one of us, this could be a good opportunity to fast from it and refocus on the good.

This refocusing could lead us to some politics-related almsgiving, too. Myopic attention to the national race can distract us from the fact that so much of politics is local. Often, the best efforts to work for the common good take place in individual cities and towns. What community organization near you is practicing politics in the best sense of the word? Maybe it's a social action group fighting for a living wage for all workers, or a Catholic Charities agency that is welcoming and resettling refugees in your area. Consider choosing one that interests you and contribute some money or time before Easter.

This year's Super Tuesday is March 1 -- about halfway through Lent. It's a great opportunity to pause and see if election season is helping or hindering our journey toward Easter.