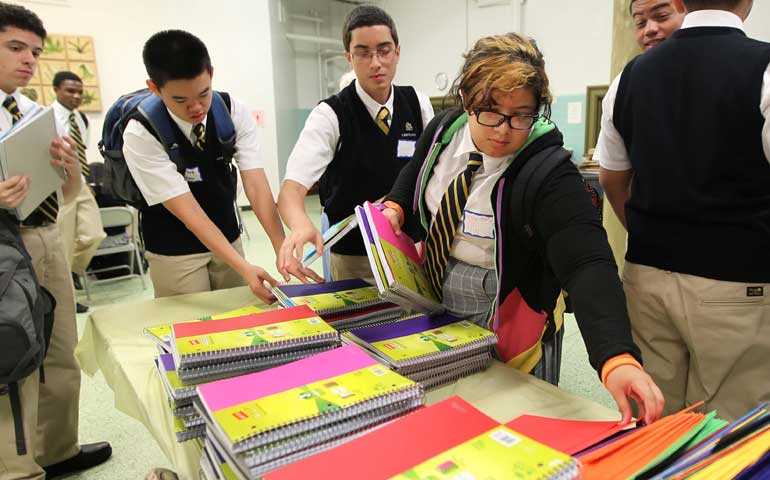 Kianna Cruz, center, a new student at Cristo Rey Philadelphia High School, picks out two notebooks that are provided by the school, along with other supplies, in August 2012. (AP/The Philadelphia Inquirer/Michael Bryant)

You probably don't know Miguel Rios or Veronica Flores or David Lorenzo, but by the time you've finished reading about their struggles and triumphs, you'll feel as if you do. And what's more, you'll care about what happens to them and to their classmates in the 28 high schools across the country that make up the Cristo Rey network.

Megan Sweas tells their stories and those of their peers and teachers, as well as the larger story of an upstart Catholic educational enterprise, with heart and a telling eye for detail in Putting Education to Work: How Cristo Rey High Schools are Transforming Urban Education. Sweas writes occasionally for NCR.

The Cristo Rey Network, which serves more than 9,000 young people from economically disadvantaged backgrounds, started humbly enough. The brainchild of a Jesuit priest in Chicago, the first school opened in 1996 in that city's Pilsen neighborhood, a largely Mexican community on the Lower West Side. While today Pilsen is facing the forces of gentrification, nearly 20 years ago it was just another poor urban neighborhood with bad public schools and high dropout rates.

The school was funded through an innovative work-study model that persists today: Corporate partners pay students' tuition, and, in exchange, each student works five days every month for his or her corporate sponsor. Students learn people skills and how to operate in an office environment, interacting with -- and starting to act like -- professionals. Schools operating at full capacity cover more than half of their operating costs with the revenue generated by the work-study program.

Once students cross the threshold of a Cristo Rey school, they enter what Sweas calls a "culture of high expectation" that is often quite different from anything they might have experienced previously. Sweas interviewed students from a number of the schools in the network. She sketches a compelling portrait of young people on the cusp of adulthood, some brimming with swagger they can't back up, others barely daring to hope that something better lies ahead, some driven by their own ambition, others prodded by grandparents and single parents to strive and achieve.

Proving the adage that people will rise to the occasion if given the chance (and if someone believes in them), many Cristo Rey students, who usually start high school at least two grade levels behind, make remarkable strides -- academically, personally, socially. That is a feat, because the stats Sweas ticks off are grim:

High school graduation rates for this demographic are low, and college-going rates lower still, but that is ultimately the goal of Cristo Rey: to get these kids to aim for a university degree.

The network's graduates boast a near 100 percent college acceptance rate, but here is where the numbers get a little sticky, which Sweas does not sugarcoat. Cristo Rey schools, on average, retain only 57 percent of students over the course of four years. Of those who leave, more than 40 percent do so for reasons beyond the school's control (family instability being a primary factor), while 32 percent do so for academic reasons.

By the 2007-2008 school year, the schools were becoming a victim of their own success: too much growth too quickly, with not enough attention paid to academic standards or what happens to kids once they get to college, where only 27 percent were earning a degree in five years.

Here, Sweas recounts how a new network president helped shift the focus from growth to quality, applying for grants to study what they were doing right and what they could be doing better to ensure greater collegiate success for their students. This led to the establishment of strict national standards covering academics (which Sweas likens to the Common Core, now in the political hot seat), college readiness, fundraising and feasibility.

Sweas puts Cristo Rey in the context of the highly successful urban Catholic school tradition and introduces readers not just to students but to the dedicated teachers, volunteers, board members and corporate sponsors who are the backbone of the Cristo Rey Network, doing their best to make their schools a safe, welcoming space in which young people can be their best selves.

The stories they tell are heartening and heartbreaking, like the one recounted by Franciscan Fr. Robert Sandoz, president of Christ the King in Newark, N.J. At a Saturday detention session, overcrowded with students who hadn't actually received the punishment to begin with, a puzzled Sandoz finally pulled one aside to ask what they were all doing there. "We'd rather be here on detention than in our house," said the young man.

It is stories like that that will make a motivated reader wonder whether there's a Cristo Rey school in his or her community and whether they need volunteers or corporate partners. There may well be, and they definitely do. Tell them Megan Sweas sent you. Chances are good she's visited the school and knows all about them.

A version of this story appeared in the Feb 27-Mar 12, 2015 print issue under the headline: Cristo Rey kids.