The history of the birth control pill is a page-turner 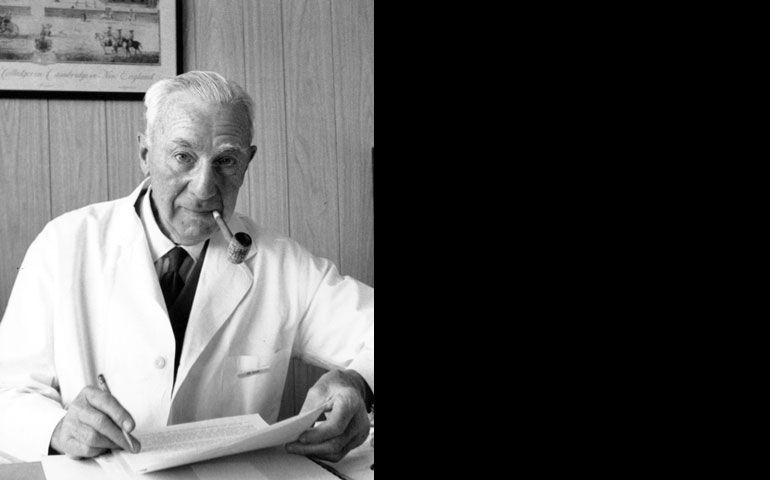 Dr. John Rock (AP Photo)
This article appears in the Synod on the Family feature series. View the full series.

THE BIRTH OF THE PILL: HOW FOUR CRUSADERS REINVENTED SEX AND LAUNCHED A REVOLUTION
By Jonathan Eig
Published by W.W. Norton & Company, $27.95

At first glance, The Birth of the Pill may seem an odd choice for review in a Catholic publication. Of the four "crusaders" in the subtitle, only one, obstetrician/gynecologist John Rock -- was a practicing Catholic.

Of the other three, the brilliant research biologist Gregory "Goody" Pincus was the son of Jewish immigrants. Fired by Harvard for the Brave New World overtones of his in vitro fertilization discoveries, Pincus went on to work heroically to develop the synthetic hormone combination that became the birth control pill. Another of the crusaders, the philanthropist Katharine McCormick, who funded much of the research that led to "the pill," seems to have been an undifferentiated white Anglo-Saxon Protestant.

In the case of the third crusader, the Catholic connection is clearer: Margaret Sanger's hostility to the church is seldom disputed. Daughter of a "Catholic apostate" father, Sanger, a nurse-midwife, became the leader of the birth control movement after seeing an immigrant woman die from a botched abortion and her own mother die at age 50 after 18 pregnancies.

But if Sanger was virulent in her opposition to the Catholic church -- biographer Ellen Chesler calls the church Sanger's "primal opponent" -- the church was no less virulent in its condemnation of her. Priests denounced Sanger's "murderous" position from the pulpit, and archbishops went out of their way to shut down her lectures.

On the other hand, Sanger was so phobic about Catholicism that she opposed Rock's involvement in the campaign to develop the pill, assuming reflexively that no Catholic could be trusted. In the end, not only did Rock spearhead essential clinical trials of the pill, but his "fair-minded" professional demeanor and devout Catholicism made him a vastly better public relations spokesperson for the pill than either the abrasive Sanger or the manic Pincus ever could.

Of course, all readers -- Catholics, Buddhists, "nones" -- welcome a page-turner, which is certainly what The Birth of the Pill is. From beginning to end, the book's narrative drive never ceases. In the first chapter, Sanger convinces Pincus to begin work on a contraceptive pill despite the pitiful amount of funding she offers. And in the penultimate chapter, almost a decade later, we return to that meeting, even as Sanger and McCormick rejoice over long-awaited FDA approval of the pill, and Pincus continues working relentlessly to perfect a version with fewer side effects.

In between, from Pincus' early research into "parthenogenesis" to Sanger's recruitment of McCormick, from McCormick's smuggling a thousand diaphragms into the U.S. in dress-seams, to Pincus' endless difficulty finding subjects for clinical trials, from opposition to the pill by the eugenicists, to the emergence of the sexual revolution, the plot never flags. So eager is the reader to discover what happens next that the scientific information slipped in from time to time goes down like a sip of cool water.

But the main reason this review belongs in NCR is the presence in Eig's book of a fifth crusader, or perhaps we should say, "anti-crusader," one that goes unmentioned in the subtitle: the Catholic church. The church plays a role in The Birth of the Pill from its early chapters, when Sanger's stonecutter father brings a noted agnostic to speak in heavily Catholic Corning, N.Y., and his tombstones are excluded ever after from the Catholic cemetery there. And early on in Sanger's campaign, the archbishop of New York, Patrick Hayes, writes in his Christmas pastoral that contraception is actually worse than abortion, because it prevents a "life that the Creator is about to bring into being."

As the 1950s unfold, and the pill comes closer to "birth," the church's opposition accelerates, and references to it turn up more and more frequently. In 1960, months before FDA approval, even good Pope John XXIII speaks out against contraception.

In the final chapters, Eig brings his narrative to a close. By 1966, Sanger, her life's work complete, is institutionalized for dementia and dies at the age of 87. Pincus and McCormick die a year later. Rock, on the other hand, lives till 1984, with a "pension" from the drug company that made huge profits on his research.

But the anti-crusader, the Catholic church, makes no appearance at all. Eig writes nothing about how the bishops may have licked their wounds or regrouped after the pill became widely accepted. Even Humanae Vitae gets only a tangential reference, because of the disappointment it caused Rock.

But perhaps this is as it should be, because this fifth crusader's crusade never ended. Today that crusader calls contraceptives "abortifacients," whereas previously it claimed that contraception was worse than abortion. Today, it denounces Catholic sisters for supporting the Affordable Care Act, while in the past it denounced Sanger for supporting birth control. But whether it's the pill or "abortifacients," the nuns or Sanger, it's the same old crusade.

[Marian Ronan is research professor of Catholic studies at New York Theological Seminary. Her latest book is Sister Trouble: The Vatican, the Bishops, and the Nuns.]