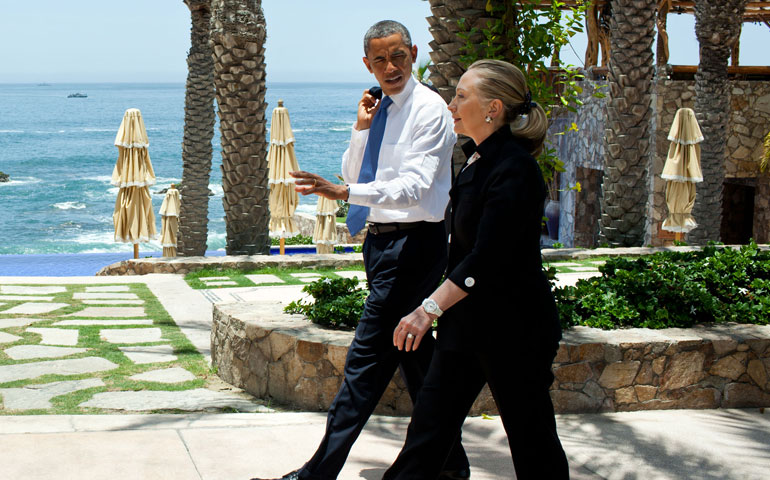 Two encounters during an assignment to the Middle East kept coming back to me as I read Mark Landler's intensely readable Alter Egos: Hillary Clinton, Barack Obama, and the Twilight Struggle over American Power.

The other encounter was far less warm and fuzzy: A young Syrian refugee living in Beirut told me that if he lived in the United States, he would vote for Donald Trump. Why, I asked? Because he is honest.

I asked what he meant and he said that President Barack Obama had been dishonest in declaring there would be a U.S. military strike should the government of Syrian President Bashar Assad use chemical weapons against its own people.

Assad did indeed cross the "red line" that Obama said would prompt U.S. military action -- and Obama's pullback from that threat prompted howls of protest from Obama critics (and not a few people within the administration itself). Syrians like the man I met were understandably angry.

The tension between "soft power" -- the use of diplomacy and the draw and reputation of American educational and cultural institutions -- and "hard power" -- the might of the United States military -- is an underlying theme in Landler's book. And there are examples aplenty of Obama and Clinton differing in key ways about what best constitutes the use of American power.

"Clinton and Obama have come to embody competing visions of America's role in the world: his vision restrained, inward looking, radical in its acknowledgement of limits; hers, hard-edged, pragmatic, unabashedly old-fashioned," writes Landler, a New York Times reporter who has covered both the State Department and the White House.

Landler adds some key caveats here: "It is too simple to say she is from Mars and he is from Venus. The reluctant warrior in the Oval Office was nevertheless an avid believer in drones, Navy SEALs and other instruments of covert warfare. The hawk in the State Department was nevertheless committed to the diplomacy and multilateral institutions championed by [Woodrow] Wilson. Realism and idealism coexist in both of them."

That fact may explain why the onetime political rivals worked together as well as they did -- much to the surprise of a fascinated nation and world. Their early "crucible," as Landler notes, was the 2009 Copenhagen climate change summit, when the unlikely duo barged into a meeting in which China's leaders were not only trying to weaken the agreement under debate, but doing so "with windows taped over to conceal their dealings from the Americans," Landler writes.

It was a bold move on the part of the young president and his superstar secretary of state -- "C'mon, let's just do this," Obama told Clinton -- drawing "a collective gasp from the leaders huddled around a conference table."

The agreement was hardly a milestone in the history of climate change response, but Obama and Clinton at least saved it from collapse.

What of the personalities of these two commanding figures? In Landler's narrative, Obama is often curt, even peevish, snapping at those he feels don't understand his arguments.

Clinton, meanwhile, comes off as a warmer person in private than she appears in public. But she is clearly a political animal of the first rank, embracing causes that would give her better play (like the U.S. opening to Burma) than those she thought were essentially hopeless. (Which explains why she did not embrace the Middle East peace process as enthusiastically as her successor, John Kerry, who, being at the end of his public career, had little to lose.)

Still, Landler is fair to both Obama and Clinton. In many (though not all) respects, Obama has followed through on his campaign pledge that the United States needed to disentangle itself from commitments and policies that simply weren't working anymore -- the one-sentence Obama Doctrine is famously summed up as "Don't do stupid sh-t."

For her part, Clinton played the good soldier in not speaking publicly about the administration's drone program while visiting Pakistan in 2009 but got an earful from an angry Pakistani public tired of the collateral damage drones were causing.

Clinton returned to Washington saying the United States "needed to be more transparent about drones," Landler writes. The sad coda, Landler adds, is that Clinton "was elbowed aside by the CIA" on this issue.

Early reviews of the book highlighted Clinton's frustration in hearing about a last-minute cabinet meeting on the radio. "Is there? Can I go?" she emailed two aides. On another occasion, the secretary of state dialed the White House and couldn't convince a switchboard operator that she, indeed, was Hillary Clinton.

"At times," Landler observes, "Clinton seemed like a kid in a new school, trying to elbow her way into the popular clique."

Gossipy vignettes like that are stock-in-trade for these kinds of books, which often have the flavor of a journalist using material from notebooks that couldn't fit in otherwise standard stories. There aren't as many of these as might be expected -- Vice President Joseph Biden is barely present in the book's narrative, for example, and a fuller picture of how the gregarious Biden dealt with Obama and Clinton would be welcome.

I am also not sure the personal relationship between Obama and Clinton ever comes fully into focus in this otherwise fine book. But then again, Alter Egos makes clear that neither Obama nor Clinton is fond of journalists. We may have to wait for Obama's memoirs or, more likely, later historians, before we get a broader sense of the relationship between the president and his first secretary of state.

Whatever their differences -- Clinton thought Obama was naive about the intentions of Vladimir Putin and Russia, for example -- Obama will be out on the hustings with Clinton in the coming months, worried that if a Republican wins the presidency, his legacy could be undone. "That is why," Landler writes in his conclusion, "her campaign is Obama's as well."

Even so, there are these fascinating differences. Landler thinks Clinton would represent a return to an earlier "bipartisan foreign policy consensus," quoting the historian Robert Kagan. For Kagan, "Clinton fits snugly in a tradition of hawkish Democratic foreign policy that goes back to Dean Acheson and Harry Truman," Landler writes.

The reference to Acheson is telling. Alter Egos ends with an interesting vignette. The grandfather of a Wellesley College classmate of Clinton's was none other than Acheson. Clinton ran into Truman's secretary of state and his granddaughter on campus the night before Clinton delivered her college graduation speech.

Acheson told Clinton, "I'm looking forward to what you have to say." If Hillary Clinton is elected president, so will we.