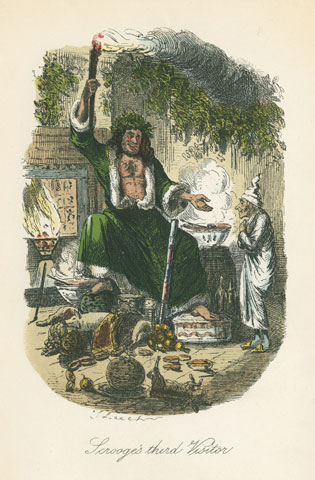 The Ghost of Christmas Present appears to Scrooge in a 19th-century illustration from A Christmas Carol. (Newscom/World History Archive)

I have the suspicion that Pope Francis is a fan of Scrooge, the crusty, mean, emotionally gnarled miser of Charles Dickens' A Christmas Carol.

Dickens called him "a squeezing, wrenching, grasping, scraping, clutching, covetous old sinner! Hard and sharp as flint, from which no steel had ever struck out generous fire; secret, and self-contained, and solitary as an oyster."

His depiction of the moneyman was so clear and sharp that the word "scrooge" has entered the English language as a reference to someone who is a misanthrope, a tight, dry husk of a soul filled with bitterness and bile.

Yet, consider this: A Christmas Carol isn't about a sinner. It's about a sinner who goes through a conversion experience. It's a story that has been told throughout human history -- about the woman who washes the feet of Jesus with her tears, about St. Paul, about St. Augustine, about St. Francis of Assisi and about Dorothy Day.

On Christmas Eve, the man who said, "Bah! Humbug!" to life is visited by three ghosts -- Christmas Past, Christmas Present and Christmas Yet to Come. Through their interventions, through their help, Scrooge realizes what a desolate desert he has made of his time on earth.

In his 2008 book Staring at the Sun, noted psychiatrist Irvin D. Yalom described the visits as "a form of existential shock therapy or ... an awakening experience."

In looking at his future, Yalom writes, "Scrooge observes his neglected corpse, sees strangers pawning his belongings (even his bed sheets and nightdress), and overhears members of his community discuss his death and dismiss it lightly."

Through these visitations, Scrooge comes to realize that he has been pursuing a bleak life of fear and selfishness, and he converts -- he takes on a new life.

Scrooge walks out of his lodgings on Christmas Day and gives money to the poor, gives gifts to those he's previously shunned, gives a raise to Bob Cratchit and gives his heart to Bob's family, particularly Tiny Tim.

"He became," Dickens writes, "as good a friend, as good a master, and as good a man, as the good old city knew, or any other good old city, town, or borough, in the good old world. ... And it was always said of him, that he knew how to keep Christmas well, if any man alive possessed the knowledge. May that be truly said of us, and all of us! And so, as Tiny Tim observed, 'God bless us, every one!' "

St. Scrooge? Yeah, why not?

Don't get me wrong, though. When I said earlier that I think that Pope Francis is a fan of Scrooge, it's not because Scrooge became saintly. It's because Scrooge is a model for all of us as both a sinner and as a saint.

We're unlikely to be knocked off our horse like St. Paul or visited by a series of Scrooge's ghosts. We find the help from other people -- if we only look. And if those around us are willing to reach out to us.

That's what it means to be Catholic, according to Francis. Last year, at the conclusion of the first session of the Synod of Bishops on the family, he called on Catholics to connect with and "lift up" the Scrooges of the world.

He told us we need to be a church "that is not afraid to eat and drink with prostitutes and publicans."

He said that our job in life is to be a church "that is not ashamed of the fallen brother and pretends not to see him, but on the contrary feels involved and almost obliged to lift him up and to encourage him to take up the journey again and accompany him toward a definitive encounter with her Spouse [Jesus], in the heavenly Jerusalem."

The heart of the Christmas story is glad tidings of peace and joy in a world of violence and sorrow. We can, like the sinner Scrooge, bring pain into the lives of others. Or, like the saint Scrooge, bring love.

We all are Scrooge-like to one extent or another. We need to be "lifted up" -- to be helped in turning away from fear and selfishness.

[Patrick T. Reardon, a former Chicago Tribune reporter, is the author of five books, including Catholic and Starting Out.]

A version of this story appeared in the Dec 18-31, 2015 print issue under the headline: The conversion of St. Scrooge.