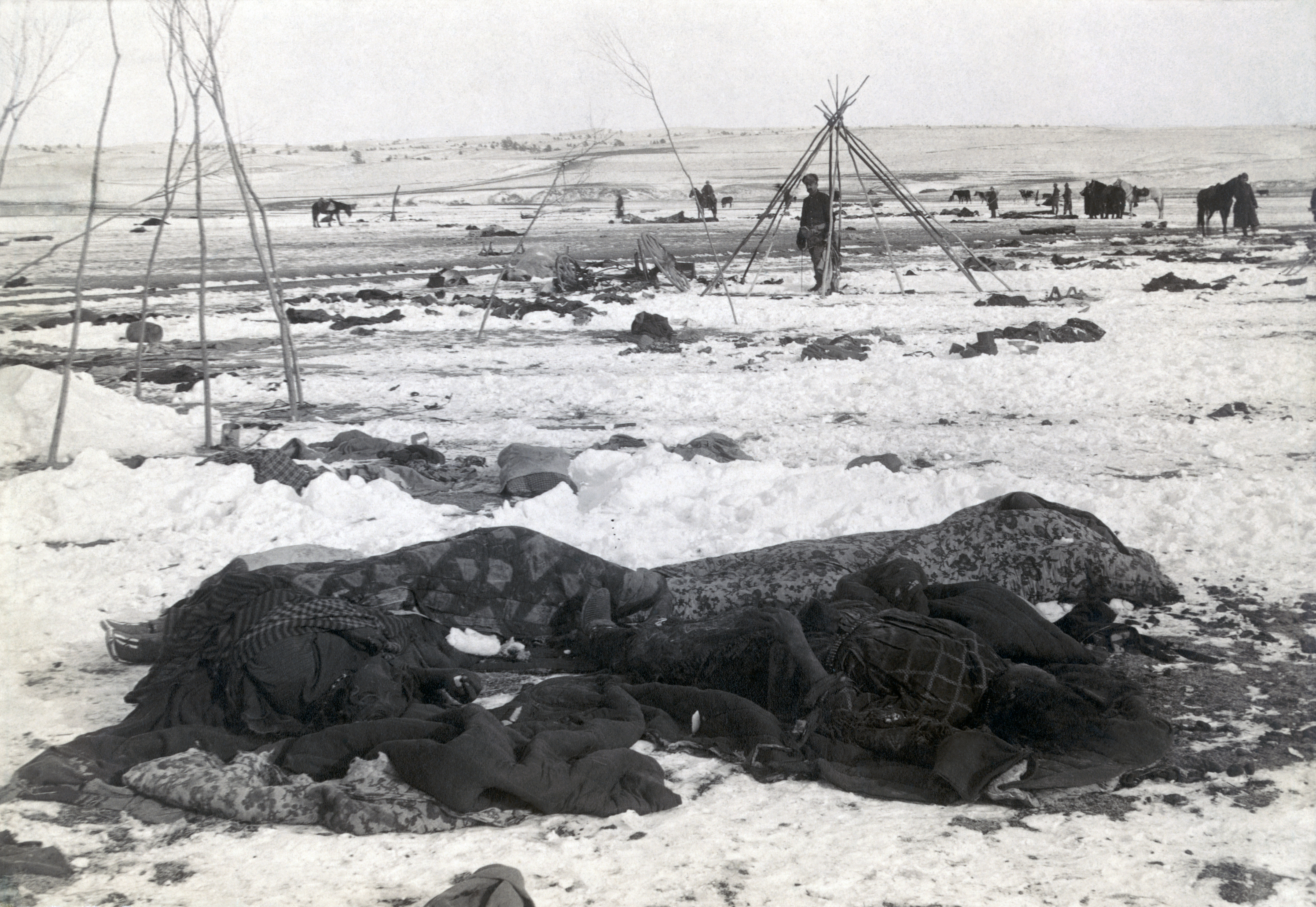 In January 1891, the bodies of four Lakota Sioux are seen wrapped in blankets, three weeks after the Dec. 29 massacre by U.S. forces at Wounded Knee River on the Pine Ridge reservation in South Dakota. (Library of Congress)

Scholars say the Doctrine of Discovery holds immense importance in world history. They say it resulted in disaster and genocide for native peoples, but that its legacy remains largely overlooked.

According to Steven Newcomb, a columnist for Indian Country Today and co-founder of the Indigenous Law Institute, what became known as the Doctrine of Discovery originated from a series of papal bulls issued in the era following the Crusades.

The first bull of consequence was issued in 1436 and titled Romanus Pontifex, he said. It concerned “the concession of the right of domination over the Guanches people” and the Canary Islands, which was taken over by the crown of Castile, a medieval state in the Iberian Peninsula.

The bull marked the first time the papacy “made it look as though no one was living there,” or had any ownership over the land being pursued by European powers, “because there were no Christians there,” Newcomb said.

That “pattern of thought” then began marching through history.

In 1452, the papal bull Dum Diversas instructed the Portuguese crown “to invade, capture, vanquish, and subdue all Saracens, pagans, and other enemies of Christ, to put them into perpetual slavery, and to take away all their possessions and property.”

In 1454, another bull titled Romanus Pontifex furthered that thinking, sanctifying the seizure of non-Christian lands in parts of Africa and restating the legitimacy of enslaving non-Christian people.

In 1493, after Christopher Columbus’ fateful voyage, Inter Caetera granted Ferdinand and Isabella “full and free power, authority, and jurisdiction of every kind,” over almost all of the Americas, save for a portion of modern-day Brazil and a few island outposts.

More bulls followed, said Newcomb, author of the book Pagans in the Promised Land: Decoding the Doctrine of Christian Discovery. Each bull incorporated language from preceding bulls, he said, forming a mosaic of papal license that was “taken to distant, non-Christian lands and used as a template, an authorization for what I call a dehumanization and domination of non-Christian peoples throughout the planet. ”

These developments represented “the beginnings of international law,” said Joshua Jeffers, a member of the history department at Middle Tennessee State University who has studied the Doctrine of Discovery.

Racism coursed through the doctrine and the bulls that informed it, Jeffers said, but its origins were ultimately political, stemming from the “Vatican trying to come to terms with the discovery of the New World … and trying to head off massive wars between Spain and Portugal” over gold.

Over the centuries, the doctrine evolved. “In 1600, it meant something different than it did in 1650,” he said. “It changed based on what the colonizer wanted to do.”

In 1823, a turning point was reached in its “ideological essence.” In the U.S. Supreme Court case Johnson v. M’Intosh — which involved a land dispute — “a new type of property ownership,” was created for Native Americans, Jeffers said, “a lesser form of ownership.”

The Doctrine of Discovery, while not mentioned by name, was given a legitimating stamp. Chief Justice John Marshall’s ruling stated:

On the discovery of this immense continent, the great nations of Europe were eager to appropriate to themselves so much of it as they could respectively acquire. Its vast extent offered an ample field to the ambition and enterprise of all; and the character and religion of its inhabitants afforded an apology for considering them as a people over whom the superior genius of Europe might claim an ascendency. The potentates of the old world found no difficulty in convincing themselves that they made ample compensation to the inhabitants of the new, by bestowing on them civilization and Christianity, in exchange for unlimited independence. But, as they were all in pursuit of nearly the same object, it was necessary, in order to avoid conflicting settlements, and consequent war with each other, to establish a principle, which all should acknowledge as the law by which the right of acquisition, which they all asserted, should be regulated as between themselves. This principle was, that discovery gave title to the government by whose subjects, or by whose authority, it was made, against all other European governments, which title might be consummated by possession.

The ruling maintained that Native Americans — referred to in the decision as “fierce savages” and “the conquered” — had the right to occupy land, but not full sovereignty. It stipulated that tribes were dependent on the federal government.

Johnson v. M’Intosh became the cornerstone of U.S. federal Indian law, Jeffers said. Subsequent Marshall court decisions attempted to walk back some of its harsher provisions, Jeffers said, but it remains to this day the dominant legal precedent.

“And not just in the United States,” he added, but also “in Australia, New Zealand and Canada,” where large indigenous populations exist. “There are Canadian rulings that refer to the 1823 [U.S.] ruling.”

For instance, in 2005, the Supreme Court referenced the Doctrine of Discovery in the first footnote to the case City of Sherrill v. Oneida Indian Nation of New York, which maintained that parcels of tribal land sold and later repurchased by the Oneida were neither tax exempt nor sovereign. The decision precluded “the tribe from rekindling embers of sovereignty that long ago grew cold,” Justice Ruth Bader Ginsburg wrote for the majority.

In 2007, the United Nations issued the Declaration on the Rights of Indigenous Peoples, a landmark document that provided what Native American scholar and attorney Walter Echo-Hawk once called a “human rights framework” for replacing the colonial MO.

The U.S., Australia, New Zealand and Canada initially held out on signing, but have since endorsed the U.N. document. However, “the thing with these U.N. declarations,” Jeffers said, “is that they have no real teeth, so countries quibble about what is in them.” Without “real enforcement power,” the colonial model remains in place.

“It sounds archaic and ridiculous,” Jeffers said, but it is reality, and it has become “so deeply ingrained” in U.S. society that it’s practically “invisible — it’s just assumed.”

“If you take the Doctrine of Discovery away,” he said, “there is no real, legitimate basis for [U.S.] American ownership of any land.”

Editor’s note: It may seem like papal statements from 500 years ago are ancient history. But Native American activists and scholars insist that Catholicism's past continues to affect the present. Papal bulls from the 1400s condoned the conquest of the Americas and other lands inhabited by indigenous people. The papal documents led to an international norm called the Doctrine of Discovery, which dehumanized non-Christians and legitimized their suppression by nations around the world, including by the United States. Now Native Americans say the church helped commit genocide and refuses to come to terms with it. This is Part Five of a six-part series on the legacy of the Doctrine of Discovery.

A version of this story appeared in the Aug 28-Sept 10, 2015 print issue under the headline: Disastrous doctrine had papal roots.