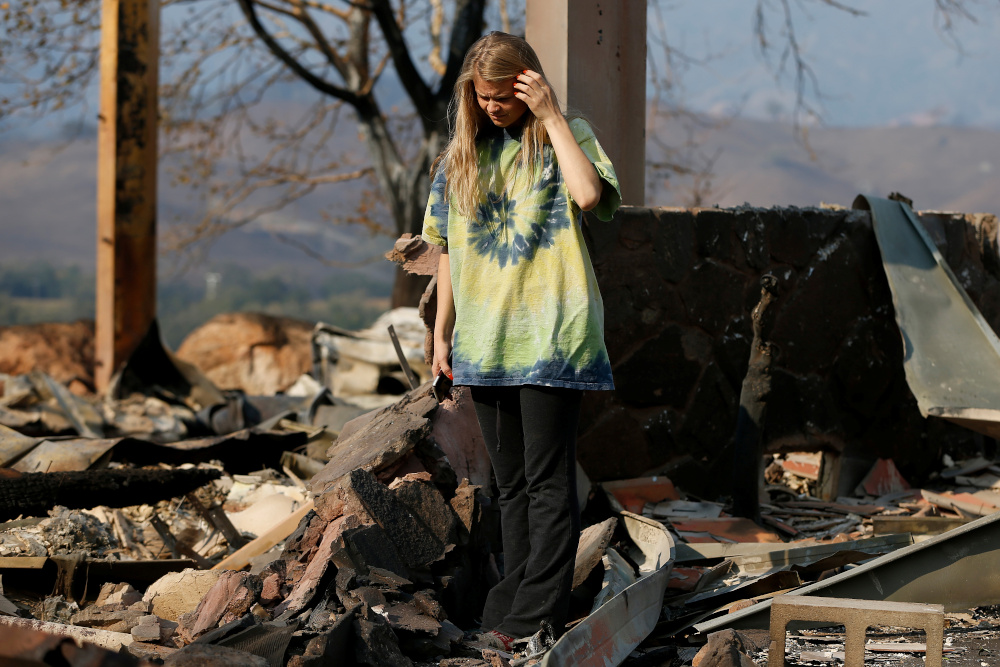 Ashley LaFranchi walks amid rubble of a home Oct. 28, 2019, destroyed by the wind-driven Getty Fire in Calistoga, Calif. By Oct. 29, the fire had burned more than 600 acres and was 5% contained, according to the Los Angeles Fire Department. Several neighborhoods were under evacuation orders, and at least eight homes had been destroyed. (CNS/Reuters/Stephen Lam)

Editor's note: This story was originally published in The Guardian. It is republished here as part of NCR's partnership with Covering Climate Now, a global collaboration of more than 250 news outlets to strengthen coverage of the climate story.

It was a balmy June day in 2017 when Donald Trump took to the lectern in the White House Rose Garden to announce the US withdrawal from the Paris climate agreement, the only comprehensive global pact to tackle the spiraling crisis.

Todd Stern, who was the US's chief negotiator when the deal was sealed in Paris in 2015, forced himself to watch the speech.

"I found it sickening, it was mendacious from start to finish," said Stern. "I was furious … because here we have this really important thing and here's this joker who doesn't understand anything he's talking about. It was a fraud."

The terms of the accord mean no country can leave before November this year, so due to a quirk of timing, the US will officially exit the Paris deal on November 4 – just one day after the 2020 presidential election.

The completion of Stern's misery, and possibly any realistic hopes of averting disastrous climate change, rests heavily upon the outcome of the election, which will pit Trump against former vice-president Joe Biden, who has vowed to rejoin the climate agreement.

The lifetime of the Paris agreement, signed in a wave of optimism in 2015, has seen the five hottest years ever recorded on Earth, unprecedented wildfires torching towns from California to Australia, record heatwaves baking Europe and India and temperatures briefly bursting beyond 100 degrees farenheit (38 celsius) in the Arctic.

These sorts of impacts could be a mere appetizer, scientists warn, given they have been fueled by levels of global heating that are on track to triple, or worse, by the end of the century without drastic remedial action. The faltering global effort to curb greenhouse gas emissions and head off further calamity hinges, in significant part, on whether the US decides to re-enter the fray.

"The choice of Biden or Trump in the White House is huge, not just for the US but for the world generally to deal with climate change," said Stern. "If Biden wins, November 4 is a blip, like a bad dream is over. If Trump wins, he seals the deal. The US becomes a non-player and the goals of Paris become very, very difficult. Without the US in the long term, they certainly aren't realistic." 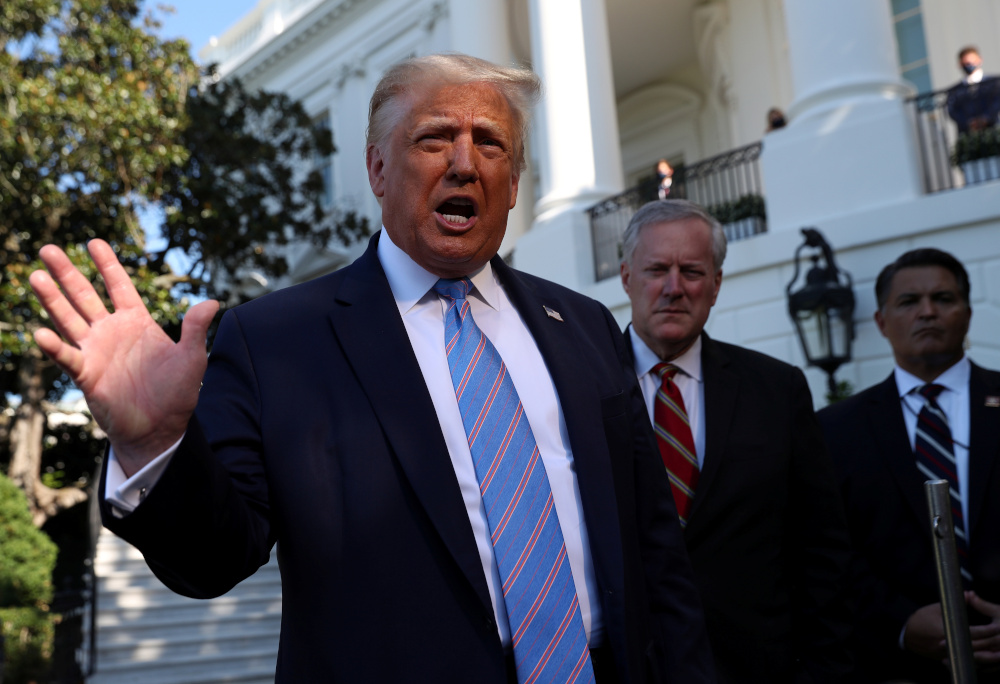 Nearly 200 countries put their name to the Paris accords, pledging to face down the climate emergency and limit the average global temperature rise to "well below" 2 degrees celsius above the era before mass industrialization started pumping huge volumes of planet-warming gases into the atmosphere from cars, trucks, power plants and farms. A more aspirational goal of halting temperatures at a 1.5 degrees celsius rise was also included although, just five years on, the planet is already creeping perilously close to this mark.

The Paris deal brought major, growing emitters like China and India on board with the quest to shift towards cleaner sources of energy, in part due to the urgings of Barack Obama, who claimed the agreement showed the US was now a "global leader in the fight against climate change."

"If Trump wins, he seals the deal. The U.S. becomes a non-player and the goals of Paris become very, very difficult." Todd Stern

Trump, who once famously called climate science a "hoax," has never looked kindly on the deal, which he framed as an international effort to damage the US while letting China off too lightly. In his Rose Garden speech, Trump remarked that he was elected to "represent the citizens of Pittsburgh, not Paris." In reality, each country is free to choose its own emissions cuts without any sort of enforcement. "Paris is like a vessel, such as a glass – you can pour water or wine into it," said Sue Biniaz, a former US state department lawyer who drafted parts of the Paris deal. "It's not the design of Paris that’s the problem, it's that there's not the political will to do enough."

The US government in practice abandoned any concern over the climate crisis some time ago, with the Trump administration so far rolling back more than 100 environmental protections, including an Obama-era plan to curb emissions from coal-fired power plants, limits on pollution emitted from cars and trucks and even energy efficiency standards for lightbulbs. In an often chaotic presidency, Trump's position on climate change has been unusually consistent – American fossil fuel production must be bolstered, restrictive climate regulations must be scrapped.

Unswayed by growing alarm among Americans over the climate crisis, Trump is taking this same message to the election. "Biden wants to massively re-regulate the energy economy, rejoin the Paris climate accord, which would kill our energy totally, you would have to close 25% of your businesses and kill oil and gas development," the president said this month, without citing evidence, as he announced another rollback, this time of environmental assessments of pipelines, highways and other infrastructure.

Despite all this, US emissions have continued to fall, due in large part to the downfall of a coal industry that Trump has attempted to prop up. The international ramifications have been telling, however – in the absence of any sort of positive cajoling from the US, global emissions have remained stubbornly high and most countries are lagging behind their own promised actions.

According to the Climate Action Tracker, only Morocco is acting consistently with the Paris agreement's goals, with the global temperature rise set to exceed 3 degrees celsius by the end of the century even if the current pledges are met. Paris was meant to be only the beginning – countries are supposed to continually ratchet up their ambition levels until the more extreme ravages of climate change, such as dire flooding, heatwaves, crop failures and the loss of coral reefs, are avoided.

"There's been less political will from other countries to take action to a certain extent because the US isn't pushing for it," said Biniaz. "During the first four years of Trump it's easier to say it's likely to be an aberration, a short-term deviation, but if it's eight years it's harder to keep together the coalition of countries that care about this."

'Another meteorite is coming'

Another four years of a Trump administration uninterested in the climate crisis could set back global emissions cuts by a decade, according to one published analysis, making the chances of meeting the goals of Paris near to impossible.

Hakon Saelen, an environmental economist at the University of Oslo who led the study, said the US withdrawal is a "significant major blow" to the mitigation of the climate crisis. "The world cannot afford any delay if the 2 degrees celsius target is to be reached," he said. "Our model indicates that the chance of reaching it is very low already, but near zero with another Trump term."

But even with an engaged Biden administration that is somehow able to get Congress to agree to a $2 trillion plan to shift the US on to renewable energy, the challenge is immense. The world has dithered on cutting emissions for so long that only an unprecedented, rapid overhaul of the way we travel, generate energy and eat will keep humanity within the bounds of safety outlined in Paris.

The world will have to slash emissions by more than 7% a year this decade to have any hope of meeting the 1.5 celsius target, according to the United Nations. This annual cut will be achievable this year only through the devastation of the coronavirus pandemic, which shuttered much of the global economy. A more sustainable path to decarbonization will need to be immediately identified and implemented.

"The warmer it gets the worse it gets and the [Paris] targets are broadly at a level where things will get really bad," said Zeke Hausfather, director of climate and energy at the Breakthrough Institute. "We don't want people to give up hope, the human race won't become extinct at 2 degrees celsius but that's an unnecessarily high bar. There are still large threats and a lot of good reasons to keep warming below that.

Stern said American voters will naturally be "supersonic focused" on coronavirus and the economic fallout. "But climate change can't be forgotten this election," he said. "The Covid crisis has shown us countries can do remarkable things in short order when they believe they have to. It shows us we need leaders who also understand what we need to do on climate change, because that is another meteorite heading our way."