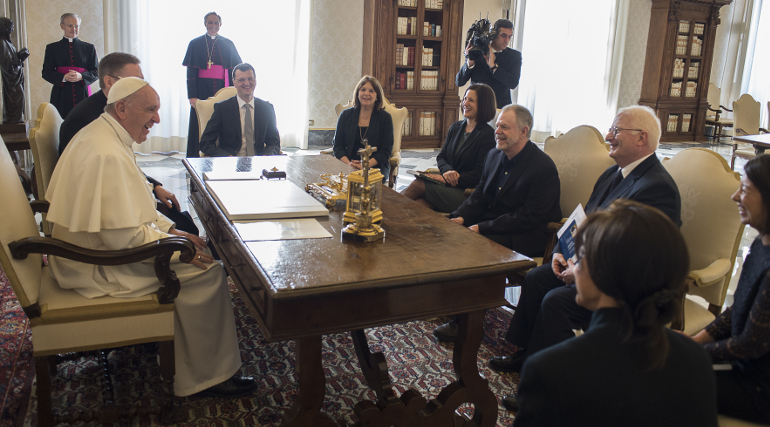 Pope Francis met for nearly an hour last week with seven representatives of a global network of about 1,000 moral theologians, speaking with them on the role their work plays in helping people understand the deeper roots of Catholic teachings.

Among the topics discussed in the first such meeting between a pontiff and the leaders of Catholic Theological Ethics in the World Church: how different countries are receiving Francis' apostolic exhortation Amoris Laetitia, the moral teachings behind his encyclical Laudato Si', and differing Catholic perspectives on feminism.

Jesuit Fr. Jim Keenan, one of three co-chairs of the network, said the pope used the March 17 encounter to praise his group's work in connecting theologians from about 80 countries.

"He really applauded us for our work focusing on [building] non-polarizing dialogue among over 1,000 members in our network," Keenan said in an interview Tuesday, March 21.

Catholic Theological Ethics in the World Church began its work in 2006 with a first-of-its-kind cross-cultural conference for moral theologians in Padua, Italy, which was attended by some 400 ethicists.

A second global conference in 2010 in Trent, Italy, attracted some 600 theologians, while subsequent regional conferences have been held in Bangalore, India; Nairobi, Kenya; Berlin, Germany; Krakow, Poland; and Bogotá, Colombia.

Keenan, who is also the director of the Jesuit Institute at Boston College, said he and the other members of the group presented the pope with a series of volumes their network has been publishing with Orbis Books in the U.S.

The volumes, which bring together essays from theologians around the world, have so far focused on feminist theology, sustainability and migration.

In an interview Wednesday, March 22, Hogan, a professor of ecumenics at Trinity College Dublin, said that in presenting the books to the pope, her group was hoping to highlight the way it seeks to promote theologians from various parts of the world.

"The point that we were really making in presenting the book series was not on the themes themselves, though they're important, but our modus operandi, which is always having two theologians from different continents as editors," Hogan said.

Keenan said he thought the pope spent such a significant amount of time with the group partially because they began the meeting by mentioning that one of the founders of their network, Chinese Jesuit Fr. Lucas (Yiu Sing Luke) Chan, died suddenly at age 46 in 2015.

Keenan said he started the encounter by giving the pope the memorial card from Chan's funeral.

"I handed it to him and as I did many in the group began to cry," said the Jesuit. "The pope was very moved by this and said this was a very gracious gesture."

"I think what he saw is that we're a group of friends," said Keenan. "He saw that this was not just a team. These are people in relationship."