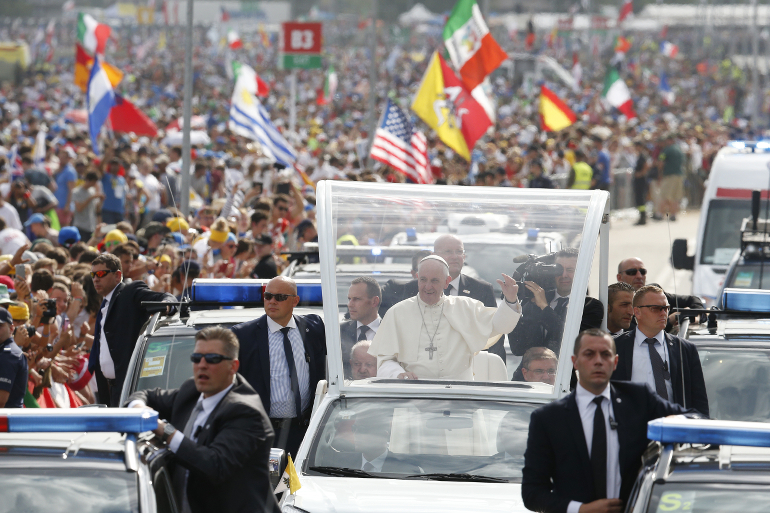 Pope Francis has asked global young people to show the world a new way, telling more than a million pilgrim youths gathered on a vast plain here to proclaim hope "with a smile and open arms" and be the vanguard of a "new humanity" that breaks down borders.

In a homily Sunday for the festive closing Mass of World Youth Day, the pontiff told the youths that God is demanding "real courage" from them: the courage to exercise the power of mercy and forgiveness to heal the world.

"People will try to block you, to make you think that God is distant, rigid and insensitive, good to the good and bad to the bad," Francis warned. "Instead, our heavenly father 'makes his sun rise on the evil and on the good.'"

"He demands of us real courage: the courage to be more powerful than evil by loving everyone, even our enemies," the pope continued. "People may laugh at you because you believe in the gentle and unassuming power of mercy. But do not be afraid."

"People may judge you to be dreamers, because you believe in a new humanity, one that rejects hatred between peoples, one that refuses to see borders as barriers and can cherish its own traditions without being self-centered or small-minded," he told the youths.

"Don’t be discouraged!" he exhorted. "With a smile and open arms, you proclaim hope and you are a blessing for our one human family, which here you represent so beautifully!"

Francis was speaking Sunday in the last major event of his five-day trip to Poland, in which he celebrated World Youth Day events but also touched on political themes with the country's leaders and made a symbol-laden visit to the World War II concentration camps of Auschwitz and Birkenau.

Enthusiasm for the pope's visit has been high, with many of those who attended the Mass Sunday sleeping outside at the venue overnight to preserve their spots. Most had simply stayed there after a prayer vigil with Francis at the same field Saturday evening, which organizers said attracted some 1.6 million people.

Four hours before the start of the Mass, the open field about 10 miles southeast of central Krakow was a vast scene of tents and people covered in brightly colored ponchos and blankets sleeping in the open air, some covered in national flags.

Youths from some 187 countries have been reported at World Youth Day, including more than 30,000 from the U.S. Many have been accompanied by their bishops, and organizers say about 70 cardinals and 800 bishops from around the world are participating.

At the end of the Mass, Francis announced that the next such gathering will be held in 2019 in Panama.

Security for the Polish event was extraordinarily tight, with thousands of police and security officials maintaining a secure area for miles around the Mass venue and slowly performing an electronic scan on each of the more than a million people, one at a time.

Francis was reflecting in his homily Sunday on a passage from Luke's Gospel, where a tax collector named Zacchaeus hears Jesus will be coming to visit his town and climbs a sycamore tree in order to get a better view of the famous Nazarene.

Seeing the publican, Jesus tells him: "Come down quickly, for today I must stay at your house."

Crowds near the scene express anger that Jesus would stay with someone that Jewish tradition considered a sinner, but Jesus responds: "Today salvation has come to this house because this man too is a descendant of Abraham. For the Son of Man has come to seek and to save what was lost."

The pontiff told the youths that the crowd had judged Zacchaeus, saying: "they looked him over, up and down."

"But Jesus did otherwise: he gazed up at him," said Francis. "Jesus looks beyond the faults and sees the person. He does not stop before past evil, but sees future good."

"His gaze remains constant, even when it is not met it seeks the way of unity and communion," said the pope. "In no case does it halt at appearances, but looks to the heart."

"With this gaze of Jesus, you can help bring about another humanity, without looking for acknowledgement but seeking goodness for its own sake, content to maintain a pure heart and to fight peaceably for honesty and justice," said Francis.

The pope is to conclude his visit to Poland Sunday with a meeting later in the afternoon with some 20,000 volunteers who helped make World Youth Day possible before heading back to Rome.